It’s been a slow few months in the metals complex for investors, especially as they’ve had to endure watching nearly all other assets soar to record highs. Oil (USO) prices have got a 10% bump since September, the S&P-500 (SPY) is up nearly 10%, and even industrial metal Palladium (PALL) has continued to march higher. While it may be discouraging, and investors may feel left behind, I believe this is the worst possible time to be discouraged. Not only is gold (GLD) one of the few assets that have completed a multi-year breakout this year, but it’s also one of the only assets where investors have become impatient holding it. While there’s no guarantee that the correction is over, I continue to believe we’ve seen the worst of it, and feel that any further weakness below the $1,450/oz level will provide a buying opportunity. 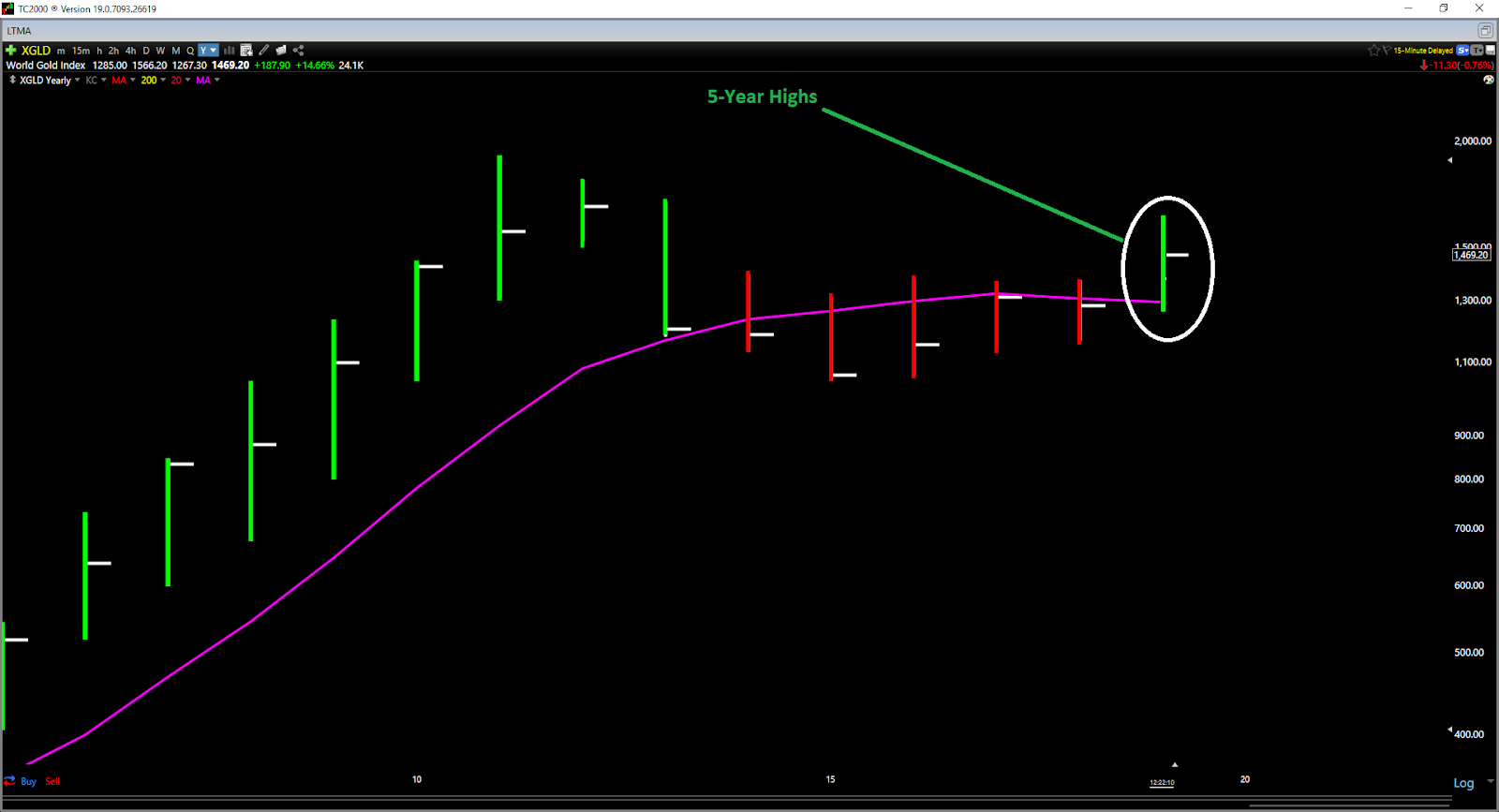 Just as the famous idiom goes ‘buy straw hats in winter,’ I believe gold is the current straw hat as we consolidate following a multi-year winter, or bear market in the metal. The pullback over the past few months has done nothing to damage the technical picture, and all overbought conditions are finally reset after this correction. This is precisely what the metal needed to set up its next leg higher in this bull market, and is the best recipe for shaking weak hands out that didn’t belong in the trade in the first place. As those have traded the market for years are likely aware, bull markets begin on pessimism and mature on disbelief, and that is what we currently have in this potential new gold bull market. Despite the metal up just below double-digits year-to-date, we have twice as many bears as bulls based on recent sentiment data, and zero excitement. This disinterest is what investors want to see, and I believe this next likely higher is likely going to catch many investors offside that got sidelined chasing other markets with more momentum, due to a lack of patience. 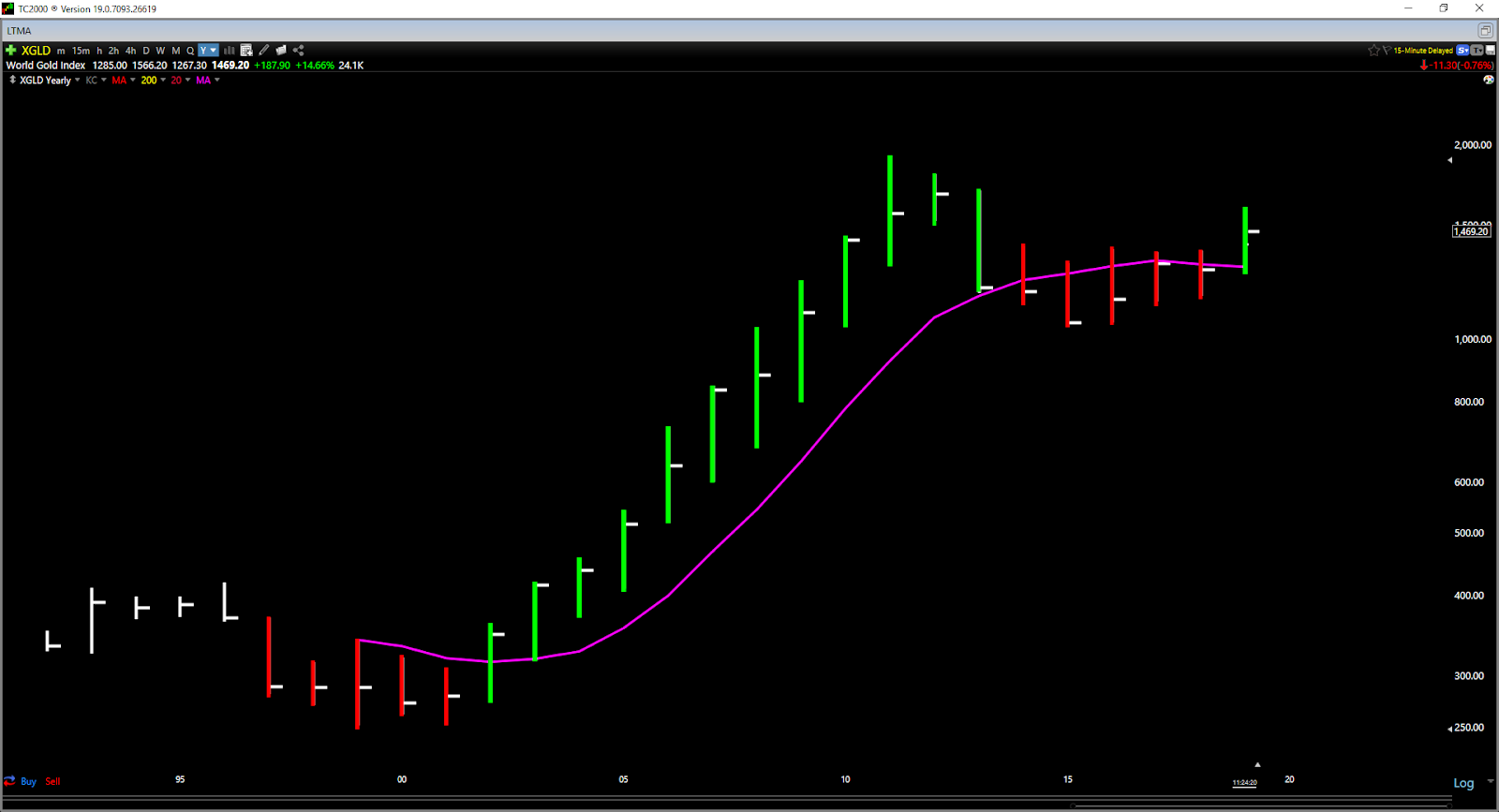 As we can see in the above yearly chart of gold, the metal is shown with green candles when it’s above its key moving average, and red candles when it’s below this key moving average. We are currently in the process of recording the first green candle in several years for the metal, and the last time we did this was in 2002. Gold was put up an average of 20% gains in three of the next four years and did not even pull back halfway into the range of the prior year at any point in 2003. If this is the case for 2002, we would expect any pullbacks to find strong buying support at the $1,370/oz level as a worst-case scenario. Frankly, I would be surprised if we pulled back that far as we’ve already seen some signs of capitulation from sentiment despite only an 8% drop.

If we zoom in to the below weekly chart, we can see that the relative strength on gold has dropped from levels near 90% down to levels below 50%, which has completely removed the overbought condition on this indicator. For the metal to move back to overbought conditions, we would likely need to see a $100/oz move minimum, which means that a re-test of the highs near $1,560/oz is likely in the cards in the next six months. Based on the fact that gold has not dipped back inside its prior breakout level suggests that there are eager buyers at higher levels, and this is also a positive development. While relative strength could trickle a little lower to trigger forced selling by some speculators in the metal, I believe the lows are in at $1,400/oz worst case. 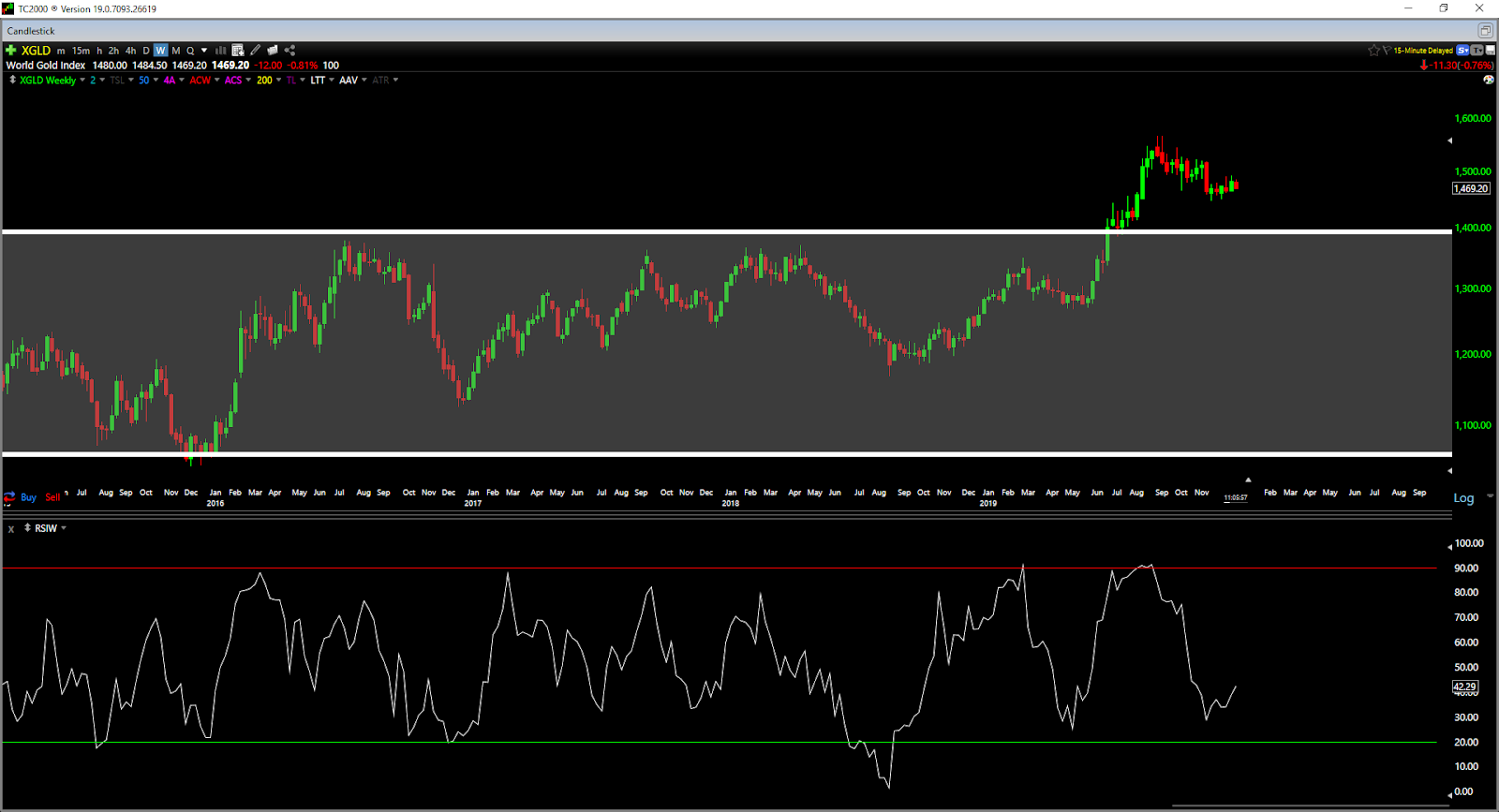 While many market participants are beginning to second guess that this is a new bull market for gold, this is the perfect time to be incrementally accumulating positions into weakness. The beginning of a new bull market is rarely ever obvious, and no one has accepted it yet, and I believe we’re in that phase currently for gold. As long as gold continues to close above $1,420/oz on a weekly close, I would consider any further weakness as a buying opportunity. Just like buying straw hats in January is an excellent way to get ahead, I believe buying gold this January will also prove fruitful.