Health care stocks have suffered as political rhetoric heats up around health care reform. BlackRock’s Heidi Richardson suggests the sector may have been over-penalized.

No sector has been a victim of election antics and volatility like health care, the third-largest sector weight in the S&P 500 Index. The S&P 500 Health Care Index is down a little more than 2% this year and the S&P Biotechnology Select Industry Index has plummeted over 15%, while the S&P 500 has notched a decent 6% gain, according to Bloomberg data.

This should come as no surprise: A key factor in the recent selloff has been investor concerns that new regulations could impact the prices of drugs. These concerns are exacerbated by political rhetoric connected to the presidential election, and we think the likelihood of significant reform remains low. Although both U.S. presidential candidates have very different approaches to health care, each has proposed significant changes to the current system. And as politicians suggest plans to rectify an imperfect system, many health care companies feel the heat, particularly biotechnology companies, which then see weakened stock prices.

However, despite the potential for near-term political headwinds, there are positive fundamental and structural factors that suggest some health care companies are being over-penalized.

In recent years, U.S. equities overall have generally seen their stock prices gain from multiple expansion, rather than significant earnings growth. In other words, investors have been willing to pay more for the same dollar of earnings. But the health care sector is an exception; its earnings have been overlooked. The cheaper the stock prices get, the less the stocks are loved. See the chart below. 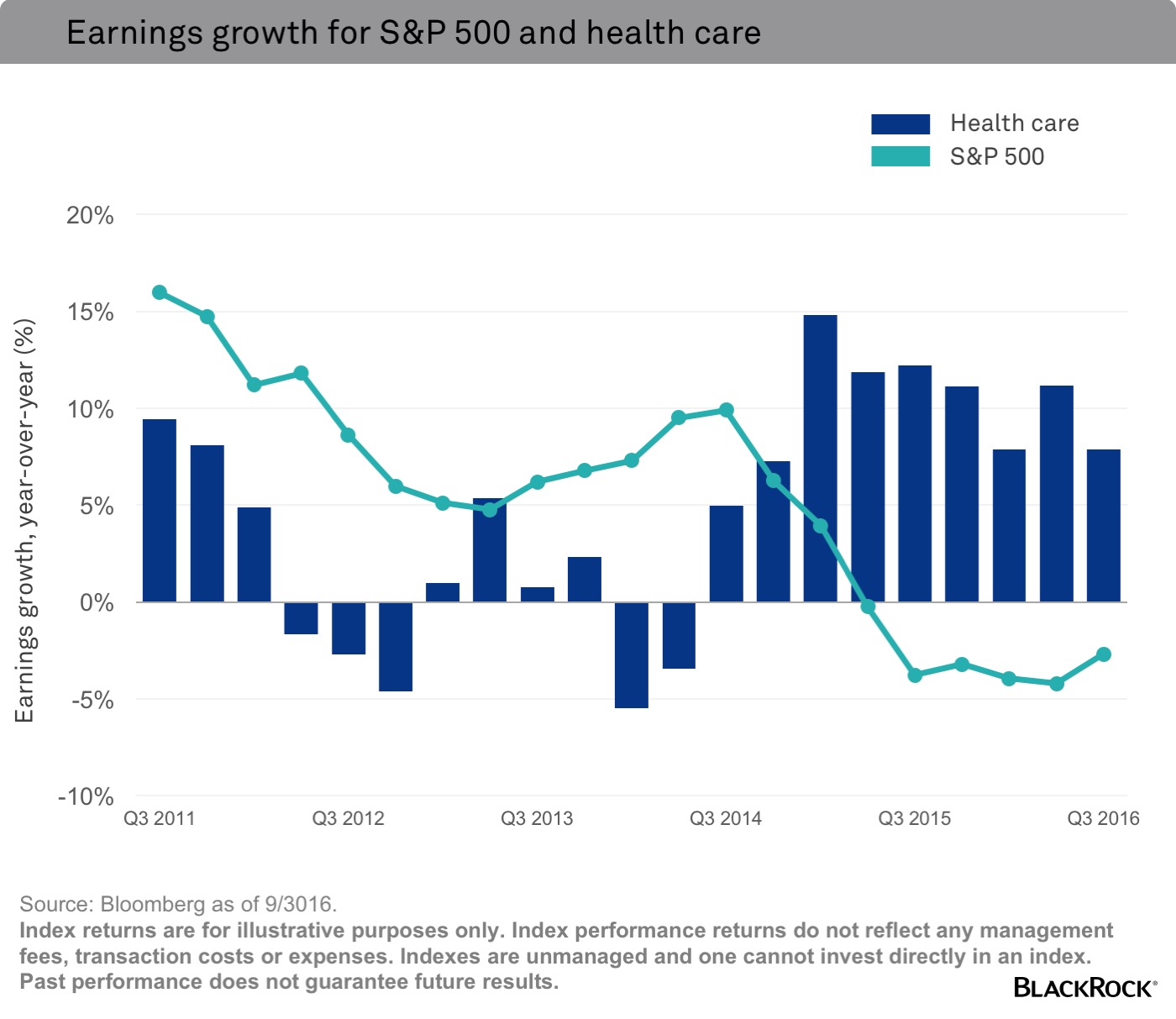 Reform talk could just be talk

So why have health care and biotech stocks been left out in the cold? The market selloff in biotech began last year when Hilary Clinton commented on drug price gouging and the need for increased regulation. In a single day, the Nasdaq Biotech Index dropped almost 5% (source: Bloomberg).

I think this is a classic example of investor behavior driving stock prices rather than investment fundamentals. For now, this reform talk is all rhetoric. Actual reform measures affecting drug pricing would likely take years to legislate and implement. I won’t speculate on whether Congress would remain under Republican control, or which candidate would become president, but I believe that there is a strong likelihood of continued political divisions and gridlock. This suggests that the power to push through major reforms will be limited.

Markets in autumn have historically seen an uptick in volatility, according to Bloomberg data. Given that we are in the final weeks before the election, we expect volatility to continue in the health care sector. In fact, the issue is top of mind for voters. In a 2016 national survey of registered voters, health care ranked number four on the list of importance behind the economy, terrorism, and foreign policy. With so much focus on the sector, health care companies could continue to pay the price for political rhetoric in the near term.

The need for health care

But it’s important to remember that in addition to valuations and earnings, lifestyle and demographic factors support health care over the long term. First, while we can postpone discretionary purchases like a car or new appliances in dire times, health care is one thing we cannot live without. Meanwhile, an aging baby boomer population means demand for health care services will likely continue to grow. And as advancements in technology ensue, so will the average age in life expectancy, thus furthering the need for health care.

Some options to think about

Stocks in the biotech industry have a history of volatility, and given the election, nothing is certain. Yet, the industry is experiencing a wave of innovation. Within this context, it may make sense for some long-term investors to consider how biotech stocks may fit into their portfolio. Investors with a higher risk tolerance and/or a longer-term investment horizon may want to think about taking advantage of market volatility to find select opportunities in health care and biotech. To gain exposure to health care or biotech companies, investors may want to take a look at the iShares Nasdaq Biotechnology ETF (NYSE:IBB) or the iShares U.S. Healthcare ETF (NYSE:IYH).