The presidential election has been a sharp reminder for many investors of why currency exposure can be a blessing or a curse. Since Donald J. Trump unexpectedly won the U.S. election on November 8th, the U.S. Dollar Index (DXY) has surged more than 3.5% (source: Bloomberg data, from 11/8-11/23/2016) and many investors now wonder if that appreciation is likely to continue. See the chart below for how the DXY has performed this year. 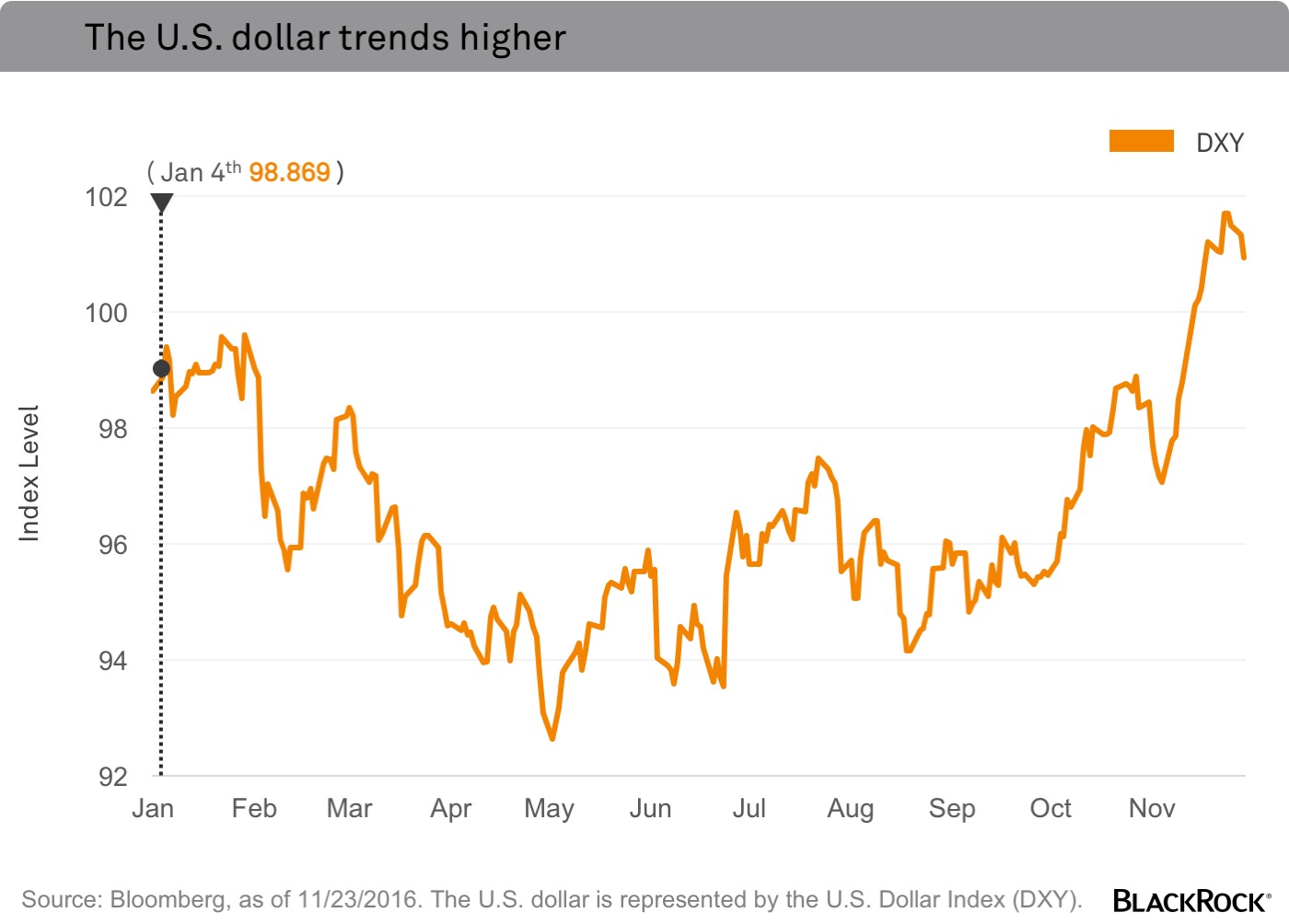 A stronger dollar can have significant implications for international holdings in a portfolio. When a U.S. investor buys non-U.S. based securities, stock or bonds, there are essentially two separate investments involved. First, of course, is buying the security itself in the hope that the price increases. But second, and often overlooked, is that the investor is trading in the U.S. dollar and purchasing the foreign currency. If the foreign currency appreciates versus the dollar, an investor can add incrementally to the return of the investment. Yet if the dollar appreciates and the foreign currency declines, an investor could see his return on investment eroded.

Over the long term the currency impact has tended to be negligible. But in the short term, it can have a significant impact, either positive or negative. Investors can potentially mitigate that risk by purchasing a “currency hedged” fund or ETF. Indeed, currency hedging was all the rage a few years back after the U.S. dollar rallied over 20% versus a basket of currencies (source: Bloomberg data, from 3/1/2014-11/30/2015), but it fell out of favor this year – until now.

That may be the right approach for many investors, but it is important to maintain perspective. To begin, while headlines may indicate the dollar is strengthening, remember that there are 180 currencies in the world and they are not all weakening against the dollar.

As you can see, the index has an overwhelming exposure to the euro, which has been down less than 2% versus the dollar year-to-date, while the yen has been up 10% and the pound has been down 15% (source: Bloomberg data, as of 11/23/2016). Also note that the Mexican peso and Chinese yuan are not among the six and have experienced wide swings this year. (Not to mention, Mexico and China are significant trading partners of the U.S.) See more currency movements in the chart below. So while the index may state a direction of the dollar on average, individual currency moves may be very different. 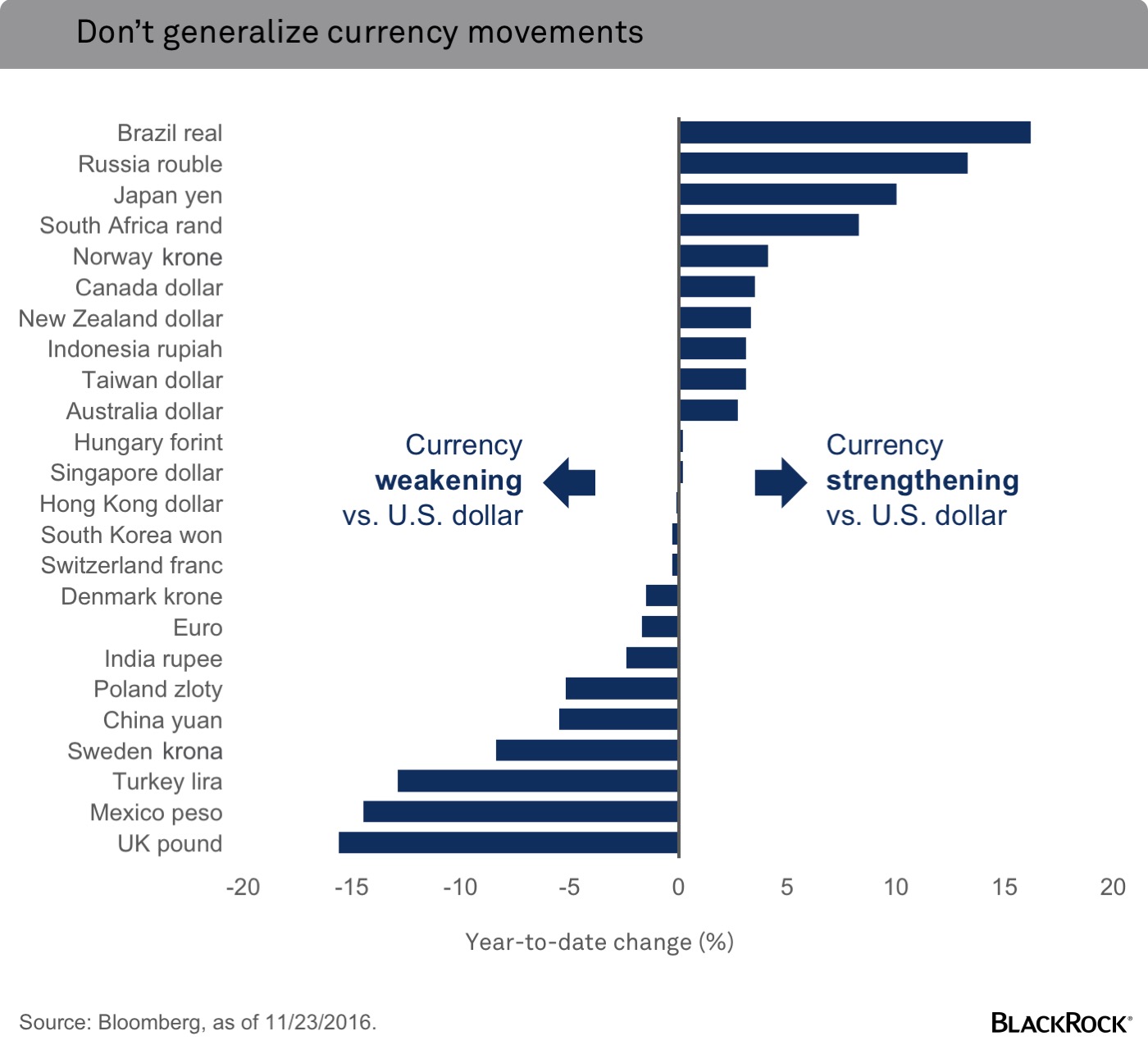 This is an important lesson if you are investing in single countries, particularly for the short term: Understanding the factors that may affect the currency, and by extension, your investment in that country is crucial. If it seems likely that the local currency will weaken, a hedged approach may make the most sense. But looking at the broad basket of currencies does not necessarily help an investor in making that determination.

Still, over the short term, the dollar may continue to strengthen if President-elect Trump moves forward with his policies to boost economic growth like increasing fiscal spending, cutting taxes or loosening regulations. While the Federal Reserve is on track to raise interest rates in early December, Trump’s fiscal spending could lift inflation and bolster the case for continued hikes. Higher interest rates generally make dollar assets more attractive and boost the currency, making the case to consider hedged exposure to potentially reduce volatility.

But generalizing currency movements is always dangerous and there is a lot of uncertainty surrounding Trump’s plans. For investors looking to invest in single country funds, particularly those outside of the DXY, they would be well served to have their own views on currency management and determine if a hedged or unhedged exposure is more appropriate depending on their investment timeframe. For investors contemplating that decision, iShares offers the industry’s broadest suite of hedged and unhedged single country ETFs. (According to Morningstar data as of 6/27/2016, iShares had 64 U.S.-domiciled single country ETFs and 41 individual country exposures.)

Heidi Richardson is Head of Investment Strategy for U.S. iShares and a regular contributor to The Blog.