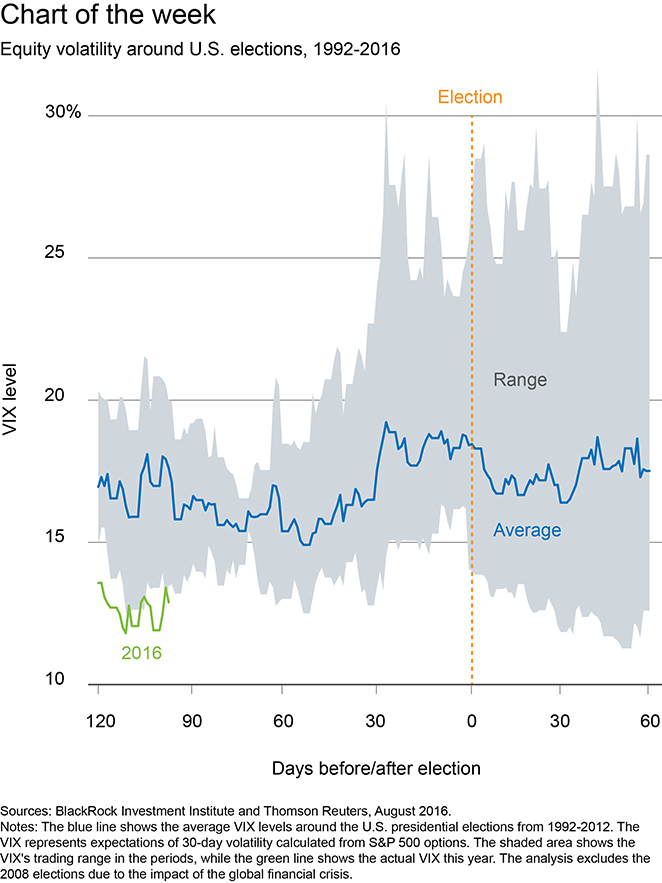 The chart above shows how volatility has moved in past presidential election cycles (the blue line) and where it has been so far this year (the green line). Equity markets tend to react more to macroeconomic factors and corporate earnings than elections, but volatility typically picks up in the month before a U.S. election. We see this trend repeating itself this year, as volatility has been usually low.

Markets in the run-up and beyond

Democratic presidential nominee Hillary Clinton has been leading the polls, and betting markets point to a solid Clinton victory. The United Kingdom’s vote to leave the European Union, however, showed such predictors can be wrong. If Republican nominee Donald Trump’s poll numbers improve, we could see the uncertainty surrounding his future policies putting downward pressure on risk assets such as equities. It could also trigger a near-term flight to U.S. Treasuries.

Yet Treasury strength could be limited. Both candidates have campaigned on increased fiscal spending on infrastructure, which would result in more Treasury issuance. We could see this nudging up Treasury yields and supporting the U.S. dollar. Gold may be a better hedge in the short run.

Investors have tended to pull money from U.S. equity funds in the month before election day in the past four presidential elections, EPFR Global data show. Market volatility usually subsides after elections. We could see a turn in sentiment toward emerging market (EM) assets if this year’s anti-trade rhetoric increases, but for now we like EM debt due to economic green shoots and investor appetite for income in a world starved for yield. Read more market insights in my Weekly Commentary.