From Jeffrey Rosenberg: The economic outlook for 2017 may rest in large part on the global yield curve. Jeff Rosenberg explains what it means, and why it matters.

In raising interest rates for just the second time in a decade, the Federal Reserve (Fed) earlier this month threw a bit of a wrench into expectations about further rate hikes. It was little surprise that central bankers boosted rates this time around, but in so doing the Fed also indicated a willingness to be more aggressive next year. And that has obvious implications for investors.

It starts with the yield curve.

In plain language, the yield curve is simply a line that connects the yield of bonds that have different maturity dates. Investors of all sizes use the yield curve to form their opinions on the health of the economy and on the extent of inflation. A steepening yield curve (when the difference between short-term and long-term bond yields increases) is generally seen as favorable for the economy, suggesting healthier growth.

After the Fed, the U.S. appeared to unwind its steepening trend as the market digested a faster-than-anticipated pace of Fed hikes for 2017. Globally, though, European and Japanese curves steepened, reflecting changes in their respective monetary policies. Following the surprise European Central Bank (ECB) announcement earlier in December, European bond markets experienced significant steepening. And yen curves moved from ever flatter to steeper under the new Bank of Japan (BoJ) policy of “yield curve control.”

In our view, global yield-curve steepening remains one of the key themes for the 2017 economic outlook. The broader implications of steepening yield curves globally go way beyond the narrow technicalities of the altered scope of ECB or BoJ quantitative easing (QE). Rather, they represent one of our earlier, pre-election core themes: the limits to monetary policy and the shift towards fiscal policy. The election fueled these trends—and in market prices, dramatically so. But the underlying economic expectations that steeper yield curves imply is of global reflation—higher growth and with it higher inflation. And steeper yield curves provide one of the avenues to achieve that outcome. 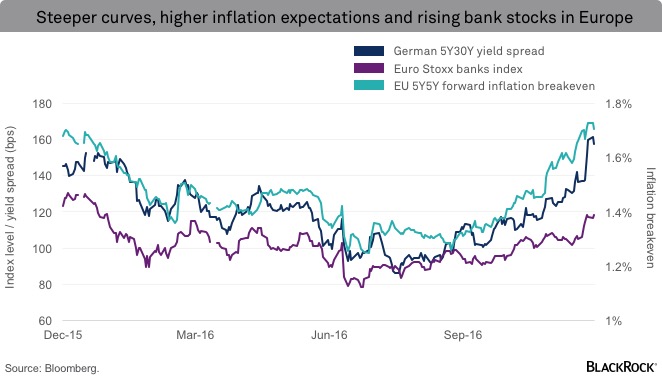 The figure above highlights the relationship between steeper curves, higher inflation expectations and rising bank stocks in Europe. As we had seen following the BoJ announcement on September 24, the movement away from signaling ever increasing amounts of QE and negative interest rate policy (NIRP) means a better environment for bank stocks, as steeper yield curves imply better margins and higher profits for banks. That shift highlights the possibility of greater bank lending: Steeper curves and shifting the outlook from ever flatter yield curves (with their attendant declining profits for bank lending) to steeper curves implies greater incentives to make loans. And greater lending activity implies faster economic activity and higher inflation.

That represents a critical regime shift and underlies our strategic recommendations for Treasury Inflation Protected Securities (TIPS) as well as our downshifting in U.S. Treasuries, reflective of a higher interest rate environment in 2017. For more market insights, read my fixed income monthly.

The iShares Barclays TIPS Bond Fund (ETF) (NYSE:TIP) was unchanged in premarket trading Wednesday. Year-to-date, TIP has gained 2.45%, versus a 12.14% rise in the benchmark S&P 500 index during the same period.

TIP currently has an ETF Daily News SMART Grade of C (Neutral), and is ranked #7 of 14 ETFs in the Inflation-Protected Bond ETFs category.