double its historical trading range. Cotton #2 for May 2013 which trades through the CME Globex & ClearPort venues has recently shown signs of life after the big spike and full retracement move of the last 2 plus years of trading activity.

So where is the Cotton market going next? Was the major move just a historical blip on the trading radar, or has something fundamentally changed in the Cotton market that makes for more aggressive price swings? The rationale for technical analysis and price action analysis is that fundamentally there is just too much information for anyone, group, or organization to factor in to an effective understanding of market dynamics. 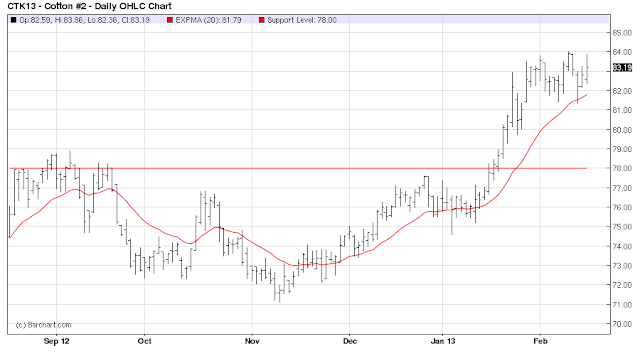 In short, there are just too many variables, too much information, and even unknown variables that play into market dynamics. But the thought is that eventually all the factors reveal themselves in the charts, the deciding factors affecting price movements, this knowledge is in the charts. Even inside information is reflected in the charts, so an understanding of price action and technical analysis tells the trader all they need to know about the commodity.

What is “priced in” regarding crop rotations, results, weather, etc. and what is not priced in by how the price reacts to fundamental news in the market. The idea is that eventually every factor that is knowable, and then needs to be prioritized by the market, is in the price movements on the chart. 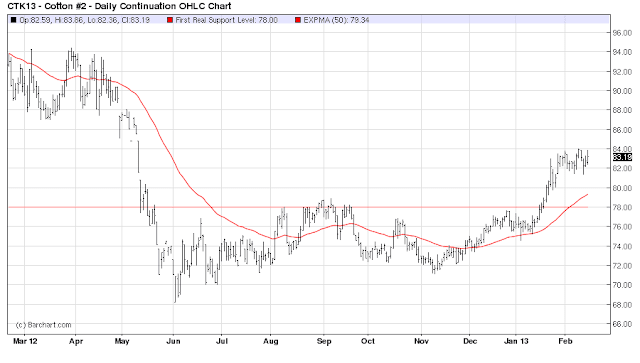 Now that was a decent Spike story 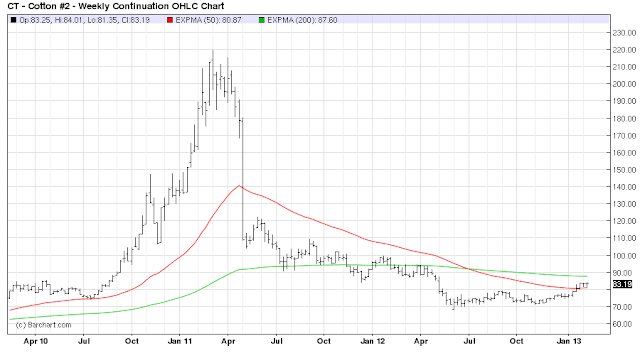 How does Cotton react to first major correction in 2013?

Cotton is trying to breakout above the $84 area of resistance and has been rebuffed four times in the month of February. It seems that some of this recent move is basically mirroring the move in the S&P 500 and markets in general.

We haven`t had an outright rejection of price moving higher as the $81 level of support has held for the last 3 weeks with little effort. 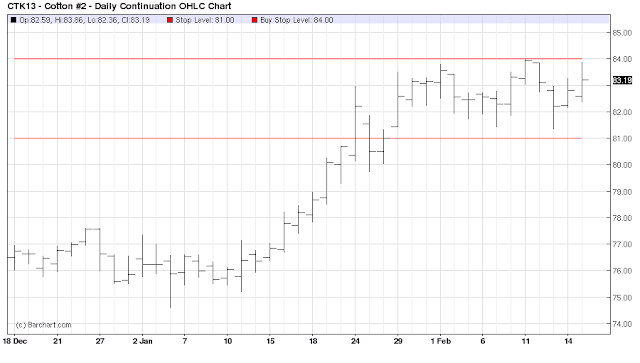 Now mind you market optimism is very bullish, and not many markets have experienced any heat yet in 2013, so I want to see how Cotton reacts to the first 100 point negative close in the Dow Industrials before I get too excited about the recent move off the bottom.

We could just be in a trading range which has resembled the majority of historical trading in this market, it hasn`t historically been a very exciting market to trade. This isn`t exactly the coffee market by historical standards!

If we break through the $84 level of resistance with any conviction then a likely test of the $90 level seems like a surety. The next much stronger resistance level would be the nice round number of $100 a pound. The final level would be $110 a pound, and if we break this level something is going on in the Cotton market beyond a little market optimism. 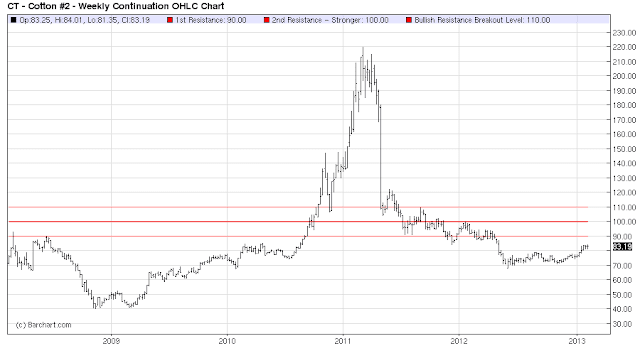 Each level that breaks convincingly should provide strong support for backing and filling purposes. This provides many different ways to play the breakout via outright buy stops to buying the retest on support holds, there are pros and cons of each trading setup strategy around these key levels both on the upside as well as the downside.

Speaking of the downside, if Cotton breaks the $81 area of support, expect price to move down towards the $77-78 area of support, watch how it reacts to these levels. The next level of support would be the $71-72 area, which should provide for a solid entry point for a long to play a trading range setup with a relatively tight stop.

But even if the $68 a pound level of support breaks, there is really strong support at $60 a pound. As the trips down to the $40 a pound levels have been recession level/market crash induced, and of course, one doesn`t want to be long a commodity when all assets are being pulled from markets on a “just protect my principal” trading event. 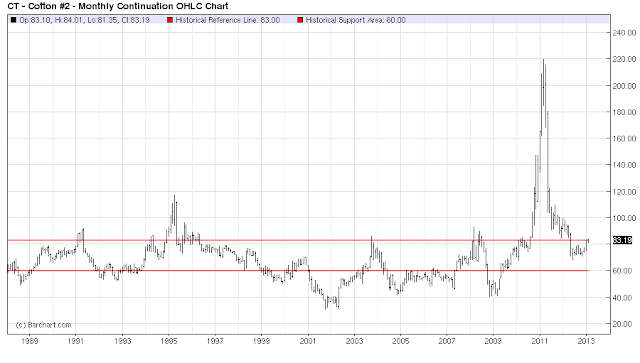 This is why reading everything you can, and knowing and thinking about the drivers of a given commodity can pay dividends if you anticipate and are right about fundamental shifts in a given market. Of course, just because you are right if too early doesn`t make for a profitable trade. You have to allow for the herd to catch up with your genius.