If you are looking for a “canary in a coal mine” type of warning for the entire global economy, you have a whole bunch to pick from right now.  “Dr. Copper” just hit a six year low, Morgan Stanley is warning that this could be the worst oil price crash in 45 years, the Chinese economy is suddenly stalling out, and world trade is falling at the fastest pace that we have seen since the last financial crisis.

In order not to see all of the signs that are pointing toward a global economic slowdown, you would have to be willingly blind.

In recent months, I have been writing article after article detailing how the exact same patterns that happened just before the stock market crash of 2008 are playing out once again.

We are watching a slow-motion train wreck unfold right before our eyes, and things are only going to get worse from here.

Copper is referred to as “Dr. Copper” because it does such an excellent job of indicating where economic conditions are heading next.

We saw this in 2008, when the price of copper started crashing big time in the months leading up to the stock market implosion.

Well, now copper is crashing again.  Just check out this chart.  The price of copper plunged again on Wednesday, and it is now the lowest that it has been since the last financial crisis.  Unfortunately, the forecast for the months ahead is not good.  The following is what Goldman Sachs is saying about copper…

“Though we have been bearish on copper on a 12-mo forward basis for the past two and a half years, we have maintained a more bullish medium to long-term stance on the assumption of Chinese copper demand growth of 4% per annum and a major slowing in supply growth around 2017/2018 … we substantially lower our short, medium, and long-term copper price forecasts, on the back of lower Chinese copper demand growth forecasts (we have been highlighting that the risk has been skewed to the downside for some time), increased conviction in copper supply growth over the next three years, and increased conviction in the outlook for mining cost deflation in dollar terms.”

It is funny that Goldman mentioned China so prominently.  Even though China’s fake GDP figures say that everything is fine over there, other numbers are painting a very dismal picture.

For instance, Chinese electrical consumption in June grew at the slowest pace that we have seen in 30 years, and capital outflows from China have reached a level that is “frightening”…

Robin Brooks at Goldman Sachs estimates that capital outflows topped $224bn in the second quarter, a level “beyond anything seen historically”.

The Chinese central bank (PBOC) is being forced to run down the country’s foreign reserves to defend the yuan. This intervention is becoming chronic. The volume is rising. Mr Brooks calculates that the authorities sold $48bn of bonds between March and June.

Charles Dumas at Lombard Street Research says capital outflows – when will we start calling it capital flight? – have reached $800bn over the past year. These are frighteningly large sums of money.

Just last month, the Chinese stock market started to crash, but the crash was interrupted when the Chinese government essentially declared a form of financial martial law.

And I don’t think that “financial martial law” is too strong of a term to use in this case.  Just consider the following excerpt from a recent article in the Telegraph…

Half the shares traded in Shanghai and Shenzhen were suspended. New floats were halted. Some 300 corporate bosses were strong-armed into buying back their own shares. Police state tactics were used hunt down short sellers.

We know from a vivid account in Caixin magazine that China’s top brokers were shut in a room and ordered to hand over money for an orchestrated buying blitz. A target of 4,500 was set for the Shanghai Composite by Communist Party officials.

So a stock market crash was halted, but in doing so Chinese officials have essentially destroyed the second largest stock market in the world.  China’s financial markets have lost all legitimacy, and foreigners are going to be extremely hesitant to put any money into Chinese stocks from now on.

Meanwhile, there is no hiding the fact that trade activity in China and in most of the rest of the planet is slowing down.  In fact, world trade volume has now dropped by the most that we have seen since the last global recession.  The following comes from Zero Hedge…

As goes the world, so goes America (according to 30 years of historical data), and so when world trade volumes drop over 2% (the biggest drop since 2009) in the last six months to the weakest since June 2014, the “US recession imminent” canary in the coalmine is drawing her last breath… 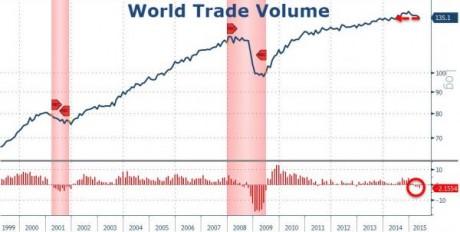 As Wolf Street’s Wolf Richter adds, this isn’t stagnation or sluggish growth. This is the steepest and longest decline in world trade since the Financial Crisis. Unless a miracle happened in June, and miracles are becoming exceedingly scarce in this sector, world trade will have experienced its first back-to-back quarterly contraction since 2009.

As you probably noted in the chart above, a decline in world trade is almost always associated with a recession.

Another similarity between the last crisis and what is happening now is a crash in the price of oil.