Oil prices have continued to soften at $82.51 a barrel for November delivery on the NYMEX Friday after a Federal Reserve Chairman Ben Bernanke’s speech sparked some uncertainty as to how far the central bank will support the economy.

Crude was also weighed down by the weekly inventory report from the U.S. EIA. Despite a week-on-week draw of product and crude inventory, and supply interruptions from Canada due to Enbridge Inc. 670,000 b/d crude pipeline shut-in since Sep. 9, and at the Houston Ship Channel after a barge knocked down a power line, the overall stocks are still well above the 5-year average with a year-over-year increase (Fig. 1) 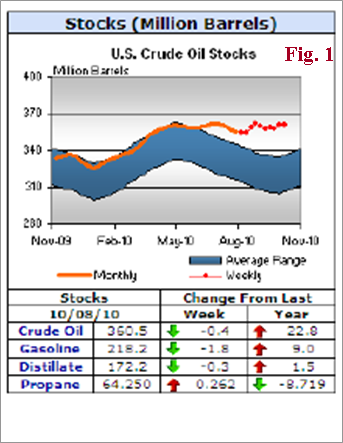 Decoupled from Equities and Metals

Crude oil prices had generally correlated with the base metals and equities on U.S. dollar weakness and strong Asian demand. However, due to the abundance of inventory and supply, crude has remained range-bound despite improved market sentiment, and started to decouple and underperformed other commodities with tighter supply conditions, such as copper, as well as equities. (Fig. 2) 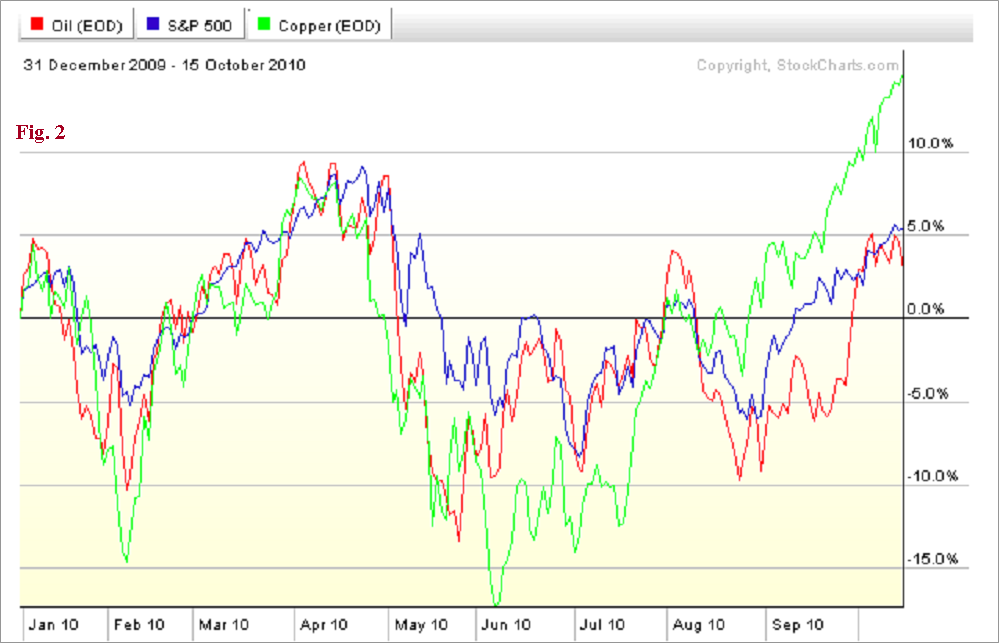 According to Barclays, over the past month, the average price increase of base metals has been 11%, compared to only 3% for WTI crude. While this has surprised some traders, it is nevertheless a reflection of diverging market fundamentals, particularly in terms of supply.

Crude oil prices are also at a “disadvantage” due to the lack of a cross-sector transparency. As one of the most widely traded and liquid commodity, oil has relatively better transparency in the form of weekly inventory / demand detail reporting and various widely available forecasts and analyses, while other commodities remain more “shrouded in mystery.”

The persistent inventory overhang at Cushing, OK, the delivery point of NYMEX crude contracts, has also rendered WTI at a discount to the North Sea Brent (Fig 3), whereas WTI is a sweeter and higher grade crude than Brent, and should trade at a premium. This, in turn, has made WTI somewhat disconnected with the global picture, and diminished the status of WTI as a global oil price benchmark. 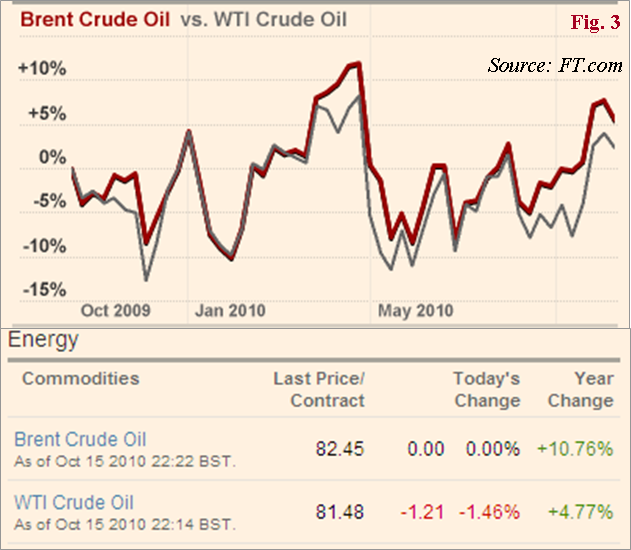 OPEC has voiced its concern about WTI, which culminated in Saudi Aramco’s decision last November to ditch WTI for the Argus Sour Crude Index to its oil for sale in the US market.  (Saudi Aramco had priced its U.S. deliveries against WTI since 1994.)

And Reuters reported there’s new push from Asia-Pacific–user of a third of global crude– in favor of European Brent to price Southeast Asian crudes. A Reuters survey of traders showed that by 2012, Brent is expected to replace other Asia-Pacific regional benchmarks.

This move will further extend Brent’s influence–currently tops WTI and referenced in about 70 percent or global crude supplies–and most likely divert the trading volume from NYMEX into ICE, weakening the U.S. status as the world’s leading financial trading hub.

Meanwhile, widespread strikes, sparked by the pension reform, at all of France’s 12 refineries have caused supply concerns among oil producers including Total, and if prolonged, could further widen the WTI-Brent spread. (However, it most likely will not have much impact on the U.S. since France is not one of the major importers of crude product into the U.S.)

While high stocks level traps crude, the 13 percent decline in the Dollar Index since June, on the other hand, has prompted some OPEC members to support $100 oil. For example, Bloomberg reported that Libya indicated “We would love to see $100 a barrel” to help offset the loss of revenue from the weaker dollar. And Venezuela claims the U.S. currency’s weakness means the “real price” of oil is about $20 less than current levels.

Federal Reserve Chairman Ben Bernanke said in a speech on Oct. 15 that the Fed is prepared to buy Treasury bonds to stimulate the faltering U.S. economy, i.e. a second round of quantitative easing (QE2), and that the interest rate will remain low and longer than the markets’ expectation (meaning probably through 2012, instead of 2011).

Such policy typically will further weaken the U.S. dollar, while artificially pushing up prices of dollar-denominated commodities such as crude oil, which could lift crude oil into a New Normal of trading range from $80 to $95 a barrel from the current $70 to $85 price band, through the end of the year, along with lots more jabs from OPEC, particularly Hugo Chavez.

For the remainder of the year, a “miracle story” in either the demand or supply side of the equation is highly unlikely.  Barring geopolitics and/or an exceptionally freezing winter season, crude oil probably will be a “trader’s market” before 2011, and prices will be mostly dictated by its inverse relationship to the U.S. dollar, and the timing and extent of the widely expected QE2 from the U.S. central bank.

For now, Asia and the Middle East are expected to account for the majority of the world’s oil demand growth over the next few years, while in the long term, demand is still looking to outstrip supply. (Fig. 4) 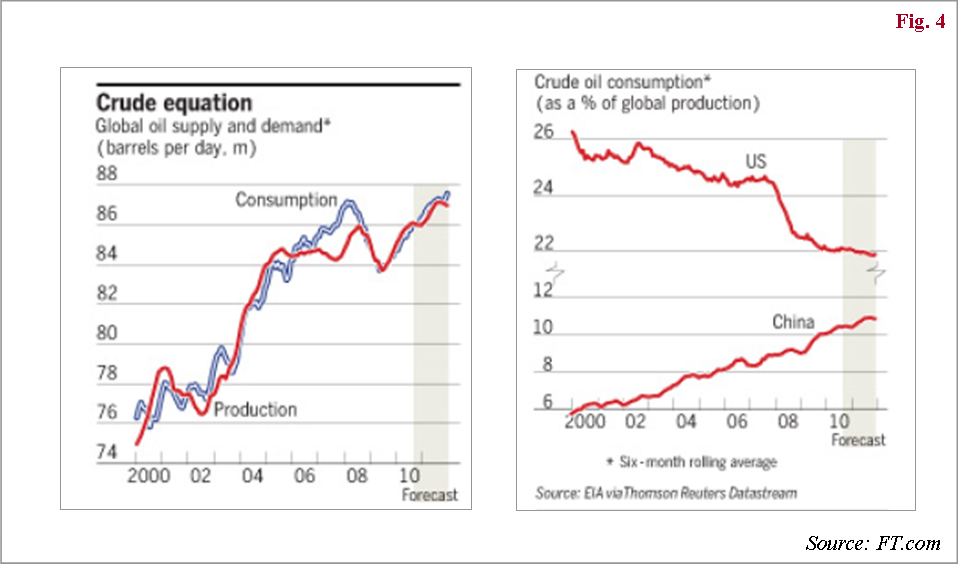 Written by By Dian L. Chu, Economic Forecasts & Opinions   Disclosure: No Positions
About: Economic Forecasts & Opinions The theory of quantum mechanics and Einstein’s theory of relativity (E=mc2) have taught us that matter (yin) and energy (yang) are inter-related and interdependent. This interconnectness of all things is the essense of the concept “yin-yang”, and Einstein’s fundamental equation: matter equals energy.  The same theories may be applied to equities and commodity markets. All things within the markets and macro-economy undergo constant change and transformation, and everything is interconnected.  That’s why here at Economic Forecasts & Opinions, we focus on identifying the fundamental theories of cause and effect in the markets to help you achieve a great continuum of portfolio yin-yang equilibrium.