From Yun Li : Stocks fell on Friday, extending this week’s sell-off, after President Donald Trump said there’s “absolutely no need to rush” on a trade agreement with China and tariffs will make the United States “much stronger.”

The Dow Jones Industrial Average fell about 113 points Friday, while the S&P 500 fell 0.5% and the Nasdaq Composite Index was 0.7% lower. Apple, which has growing China revenue exposure for the iPhone, led the market decline, down nearly 3%.

Stocks pared some of their losses after Treasury Secretary Steven Mnuchin said China trade talks are done for the day, but they were “constructive.” Chinese Vice Premier Liu He also said the talks went “fairly well,” according to reports. The Dow was down 358 points at its intraday low.

Trump signaled in a Twitter post Friday morning he could stick with China tariffs for a long period of time. The comments came after he slapped higher tariffs — from 10% to 25% — on $200 billion worth of Chinese goods.

The president added that tariffs will make the United States “much stronger,” and “China shouldn’t renegotiate deals with the U.S. at the last minute.”

“[Trump’s] bark is worse than his bite a lot of the times,” said Arian Vojdani, investment strategist at MV Financial. “We might see him try to come down a little hard, but ultimately people really don’t think we are going to see that drastic trade war play out … The administration is very keen on markets and they don’t want to see pain.”

Companies that are hinging on a trade resolution are under pressure. Friday’s drop in Apple brings its weekly loss to nearly 9%. Boeingand Caterpillar lost 1.2% and 2% respectively Friday. Chipmakers took a big hit on fears of an escalated trade war as the VanEck Vectors Semiconductor ETF is now on pace for its worst week of the year and longest losing streak since October 2018.

Ride-hailing giant Uber began trading on the New York Stock Exchange Friday at $42 per share, after pricing at $45 per share.

Still time for a deal?

The decline on Friday would have been worse but some market participants are holding onto the hope that the new tariffs are not applied to Chinese exports that are already in transit before the deadline, so that provides some additional time for the two sides to reach an agreement.

“A ‘grace period’ was included on these tariff increases, so that goods currently in transit to the U.S. from China aren’t subject to the new 25% tariffs, just the old 10% tariff,” Tom Essaye, founder of Sevens Report, said in a note on Friday.

“That grace period was not included in previous rounds of tariffs and is likely an olive branch of sorts to the Chinese side. Given shipping times, goods sent from China today will take two weeks or so to reach the U.S., so if a trade deal is stuck in that time frame, the pain of the 25% tariffs will never be felt,” he added.

Liu He was meeting with Trump’s trade team without the title “special envoy” for President Xi Jinping, a role he has held in previous talks, suggesting he may have diminished authority to make concessions that could be key to striking a deal. Trump said Thursday tariffs are an “excellent” alternative to a trade deal with China.

Yet some believe the trade battle is poised to drag on longer.

“We continue to expect the two sides to reach a trade deal eventually, but this is unlikely to happen in the short term as the war is not painful enough for either side,” Zhiwei Zhang, Deutsche Bank’s chief Asia economist said in a note on Friday. “China is not likely to give in quickly. The damage to China’s economic growth is around -0.2% on an annualized basis, which is manageable.” 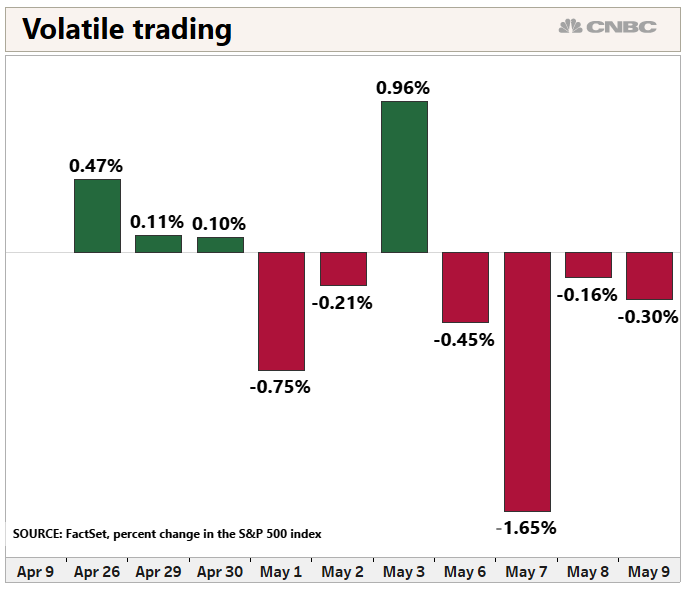 The Cboe Volatility Index, a measure of the 30-day implied volatility of the S&P 500 that’s commonly known as Wall Street’s “fear gauge,” hit its highest level since Jan. 4 on Thursday.