The Hourly View for EBAY

Currently, EBAY (Get Ratings)’s price is down $-0.54 (-0.84%) from the hour prior. It’s been a feast for bears operating on an hourly timeframe, as EBAY has now gone down 4 of the past 5 hours. If you’re a trend trader, consider that the strongest clear trend on the hourly chart exists on the 50 hour timeframe. The moving averages on the hourly timeframe suggest a choppiness in price, as the 20, 50, 100 and 200 are all in a mixed alignment — meaning the trend across timeframes is inconsistent, indicating a potential opportunity for rangebound traders.

Currently, EBAY’s price is down $-1.52 (-2.33%) from the day prior. The daily chart shows that EBAY has seen 2 straight down days. As for the trend on the daily timeframe, we see the clearest trend on the 50 day timeframe. Most noteworthy in the world of moving averages on the daily chart is that the 20 day moving average has been crossed, so that price is now turning below it. The moving averages on the daily timeframe suggest a bullishness in price, as the 20, 50, 100 and 200 are all in a bullish alignment — meaning the shorter durations are above the longer duration averages, implying a sound upward trend. Ebay Inc’s price action over the past 90 days can be seen via the chart below. 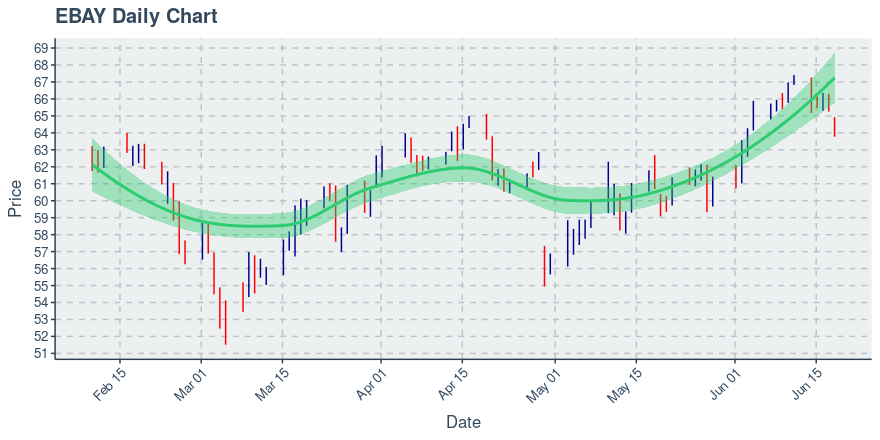 Investors and traders in EBAY may be particularly interested in the following story that came out in the past day:

Ebay is set to sell its South Korea business to a local consortium for $3.1bn, according to people with knowledge of the matter, as rivals seek to turn up the heat on SoftBank-backed Coupang in the world’s fourth-largest ecommerce market. The consortium, which consists of South Korea’s biggest bricks-and-mortar retailer E-Mart and internet group Naver, plans to buy an 80 per cent stake in eBay Korea for Won3.5tn ($3.1bn) with the US company retaining the remainder, said the people. The purchase could help the consortium to overtake fast-growing Coupang, which raised $4.6bn in an initial public offering in New York in March to become the biggest player in South Korea’s highly competitive ecommerce market.