If you want to know the shocking truth about unemployment in America, all you need to do is to look at one chart.  The chart posted below shows the change in the employment-population ratio over the past few years.  What the employment-population ratio measures is the percentage of working age Americans that actually have jobs.  As you can see, it fell dramatically during 2008 and 2009, and since then it has been hovering between 58 and 59 percent…. 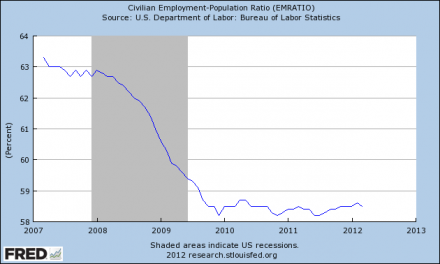 So there has been no employment recovery, and this is very odd because the employment-population ratio always bounces back after a recession. 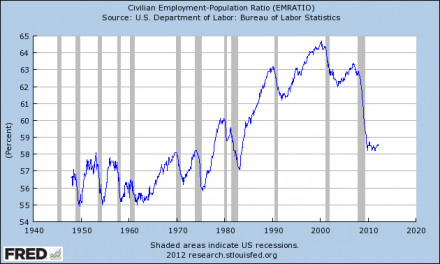 During the most recent recession, the employment-population ratio fell farther than it had during any other recession in the post-World War II era.

If these were normal economic times, it would have been reasonable to expect a huge surge in hiring by now.

But we have not seen that.

Instead, the employment rate in the United States has been remarkably flat for more than two years.

So Barack Obama should not even begin to say anything at all about a “recovery” until the employment rate at least breaks the 59 percent barrier.

In the past I have written about how fraudulent the employment statistics put out by the federal government are.

Well, fortunately there are some folks up on Capitol Hill that are starting to take notice of this phenomenon as well.  There is a new bill in Congress that would change the way that the unemployment rate is calculated….

A Republican lawmaker is intensifying his push for legislation that would change how the government measures the unemployment rate.

Rep. Duncan Hunter (R-Calif.) intends to press GOP leaders to move his bill to include the number of individuals who gave up looking for work in the percentage of jobless claims.

Of course there is probably not a chance that such a bill would ever get through the Senate, but at least some lawmakers are trying to get people to notice what is going on.

The sad truth of the matter is that the employment crisis in America is still about as bad as it was a couple of years ago.

Do you remember a couple of months ago when Barack Obama spoke with the wife of an unemployed engineer and asked her to send his resume to the White House?

Well, it turns out that the unemployed engineer still doesn’t have a job….

More than two months after President Barack Obama asked for Darin Wedel’s résumé, the phone is quiet, e-mails are no longer flooding in and the long-sought-after job interviews — which had begun to be scheduled — have petered out.

“Not even recruiting companies are calling anymore,” said Jennifer Wedel, the Fort Worth mother of two who chatted online this year with Obama about her out-of-work husband.

She says his job search has been hurt by a program to hire skilled foreign workers.

But Barack Obama is doing the same thing on a national level.

He is promising all of us that things are improving and that there will be lots of jobs for everyone soon, but it is all a lie.

The truth is that this period of relative stability that has been purchased by unprecedented levels of government debt will soon give way to even more economic trouble.

One of my readers recently brought to my attention a list of some of the major companies that are currently getting rid of workers….

Ford (NYSE:F) will be laying off 1,200 assembly line workers later on this month.

Pittsburgh-based paint and coating manufacturer PPG (NYSE:PPG) has announced that it will be laying off 2,000 workers.

J.C. Penney (NYSE:JCP) recently laid off 600 workers and has plans to lay off another 300 workers in July.

Lockheed Martin (NYSE:LMT) has announced that it will be laying off hundreds of workers.

Dow Chemical (NYSE:DOW) has announced that hundreds of workers are going to be laid off.

Yahoo (NASDAQ:YHOO) has formally announced that it will be getting rid of about 2,000 workers.

Even Oprah Winfrey is laying off workers.  Oprah is reducing the size of the staff at the OWN network by 20 percent.

Meanwhile, our economy continues to bleed jobs at an astounding pace.  At a time when American workers desperately need jobs, millions of them continue to be sent overseas.

In fact, even some jobs that you would think would be impossible to outsource are being given to foreigners.  Just recently, ABC News did a major report on all of the roads and bridges all over the United States that are being built by Chinese companies.  If you have not seen that report yet, you can view it online right here.

If you go into a Wal-Mart (NYSE:WMT) or a dollar store and you start turning over products you will find that huge numbers of them are made in China and that very few of them are made in the United States.  China is absolutely dominating us on the global economic stage.  Last year our trade deficit with China was the largest trade deficit that one nation has had with another nation in the history of the world.  Yet we continue to pursue the exact same trade policies year after year.

So how is the American economy (NYSEARCA:SPY) ever supposed to recover if we continue to play to lose?

If you still have a good job, you should treasure it and you should try to hold on to it for as long as you can.  Soon the next major economic downturn will be upon us and millions more Americans will lose their jobs and their homes.

Things did not have to turn out this way, but we made horribly bad decisions for decades and now the consequences are catching up with us.

You better get ready.