We’ve just exited one of the most volatile weeks for the market in over a decade, and the clear winner was gold (GLD), as it shed only 2% last week, and finished the week less than 10% off of its highs. Meanwhile, the price of silver (SLV) was the furthest thing from a safe haven, falling 15%, breaking multi-year lows, all while having a worse week than the overall market. Despite this massive divergence in silver, we did not see complete capitulation among the small speculators, who continue to hold more silver contracts than they did last May, despite a silver price that is 15% below May levels. This suggests that we have irrational optimism among silver speculators at a time when the technical are the weakest they’ve been in years. Based on this, I continue to see gold as the more attractive metal to hold, and I would view sharp rallies towards the $16.00/oz level in silver as selling opportunities. 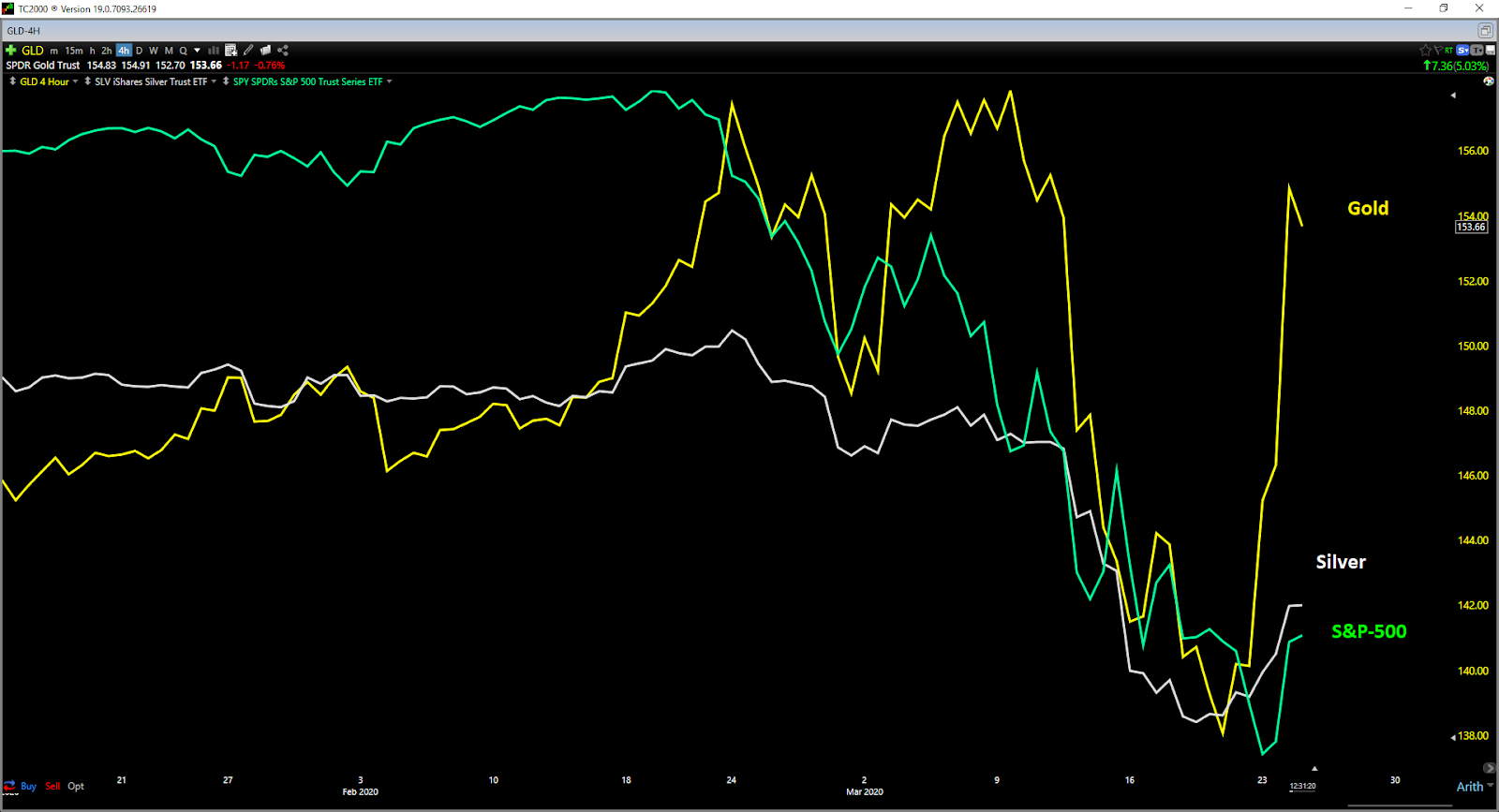 The best way to determine which market is the strongest is by watching what different markets are doing when the market makes an important low. For those watching closely last week after a 15% weekly decline for the S&P-500 (SPY), gold was the one asset class that stood tall above the rest. Not only was gold only off 2% for the week, but the metal barely sold off in the face of extreme selling pressure across all other asset classes. This suggested that gold was the only real safe haven, regardless of what the silver bulls seem to believe. In addition, silver’s 15% decline and break to new lows suggested that there’s no reason to expect silver to follow gold short-term and that the best way to play an inflationary trade on the gold price is to buy gold outright. Let’s take a closer look below:

As we can see in the chart below of silver, the metal remains in a downtrend after last week’s new low and has broken down through a multi-year base. This is not the type of price action we typically see in a bull market, and this massive reversal has crippled the bullish picture for silver. The fact that gold is within a stone’s throw of new highs at the same time that this is occurring is even more unfavorable for silver, as it shows the two have a negative correlation to each other for the time being. While sharp bounces to relieve oversold conditions are possible for silver, I believe it’s likely that silver will fail at its downtrend line near the $16.00/oz level if we do rally. Therefore, I see no reason to bullish on the asset class here. 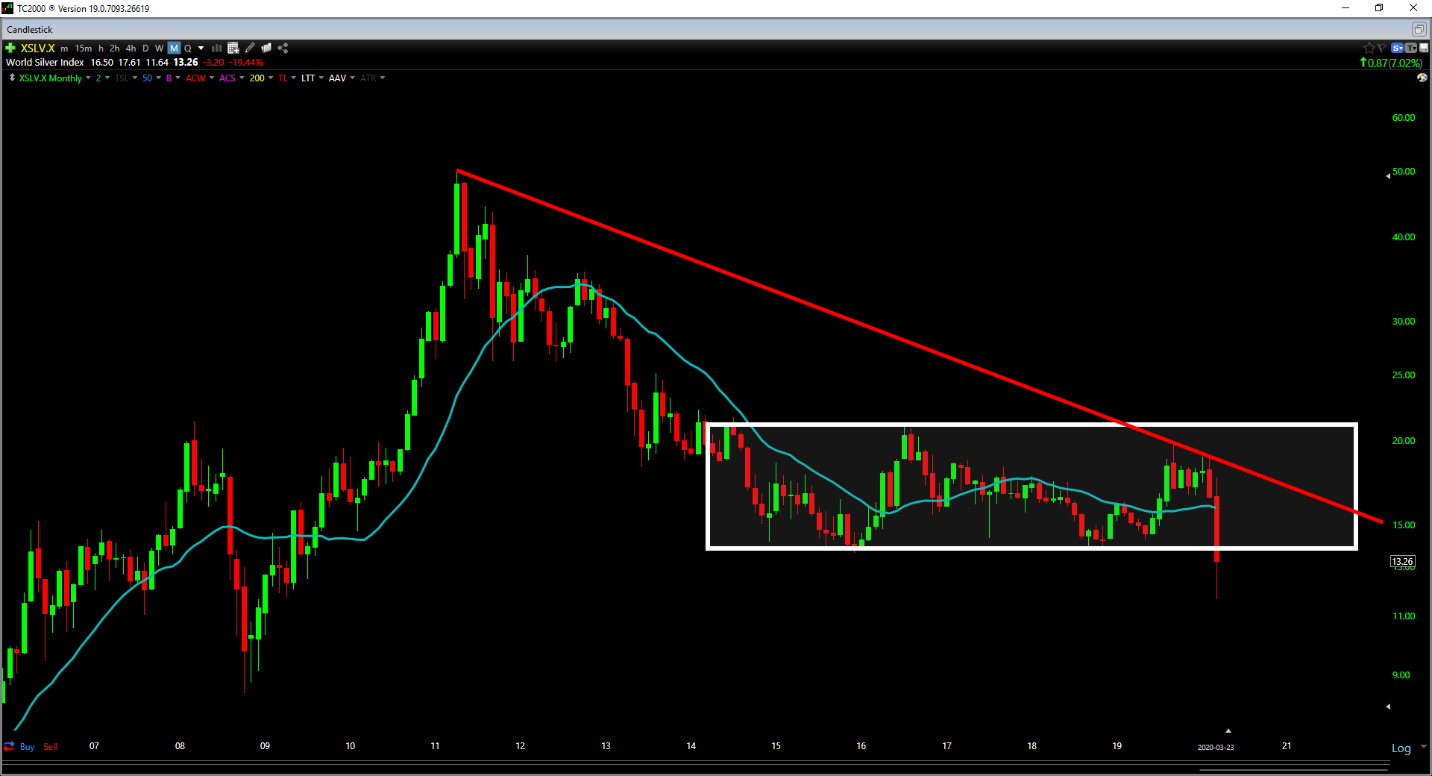 If we take a look at the positioning of small speculators in silver, we have another issue, and that’s the fact that bullish positioning remains near multi-month highs. As we can see in the chart below, the best times to buy silver have been when small speculator positioning is below 20,000 contracts, like we saw in Q1 and Q2 of 2019, while silver was below $15.00/oz. However, last week’s reading came in at 57,000 contracts for the 1-month moving average, and this is telling us that speculators are three times as bullish as they were in May, despite the price of silver being well below May levels near $14.00/oz. This means that speculators are getting more bullish the lower that silver goes, and this is the last thing investors want to see. While I would argue that the best time to buy an asset is when blood in the streets, the key to this is that we are seeing people puking up positions. At the current juncture, we may have blood in the streets in terms of a 30% decline for silver; however, we have speculators merrily buying more and not perturbed by the fall. This is not the definition of blood in the streets. Ideally, for this indicator to flip to a contrarian bullish reading, we are going to want to see the 1-month moving average drop below 20,000 contracts at a bare minimum. Based on last week’s reading, this is going to take a lot more work, as the current reading would need to shed over 35,000 long contracts.

So what is the best move here?

While silver may be oversold and overdue for a rally back near the $15.00/oz – $16.00/oz area, I believe a bounce of this magnitude would provide a selling opportunity. This is because we are likely to see speculators get even more bullish on a rebound, and we already have a crowded bullish trade despite a massive breakdown for silver. Meanwhile, we have extreme fear in gold and speculators throwing in the towel even though the metal is sitting right near its February highs. This is a perfect scenario and ultimately suggests that new highs are likely on the way for gold later this year. Based on this, I remain long gold and have no interest in silver here. As noted, silver could bounce further and head back towards the $16.00/oz level, but strong resistance at $16.60/oz is likely to keep a lid on this rally.