The major commodity to buck the trend was oil. Brent crude ending the week up 2.1%, touching $80 for the first time since 2014 (charts courtesy of Stockchart.com) 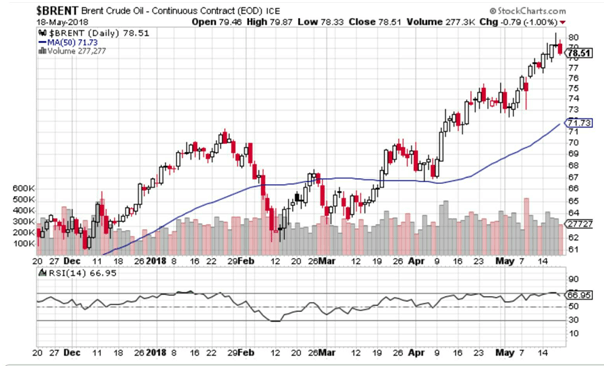 In addition to Brent crude, lumber continues to press higher, and ended the week as one of the bestperforming commodities. It’s difficult to gauge the true fundamental picture in lumber however given the impact trade tariffs are having on the price, but coupled with the relentless push higher in oil is it perhaps a leading indicator of future inflation?

In other markets, stocks had a mixed week, with DJIA and Nasdaq ending lower, with the small-cap Russell 2000 pushing higher. The VIX remains the best performer,highlighting the uncertainty in the marketplace. With the industrial metals of copper, platinum and palladium all ending lower on future growth concerns from China.(Weekly performance by Finviz.com) 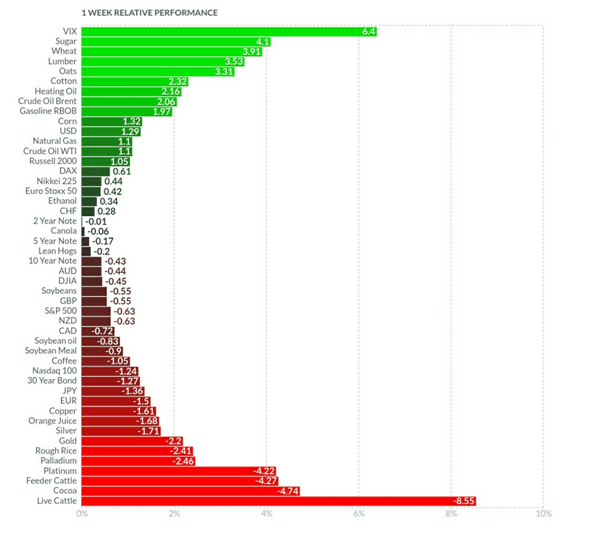 In emerging markets, Argentinareceived a short term reprieve on Tuesday when they ‘rolled over’ $26 billion of debt (known as Lebacs), and issued new debt totalling $200 billion. However, at rates between 38-40%, it raisesquestions on the long-term sustainability of such financing.

In Turkey, President Erdogun, continues to take an active role in managing monetary policyin an attempt to target growth at the expense of inflation – which now stands at 10.9%.The market has been unimpressedby the president’s attempts to micromanage policy, with Turkish Lira making new all time lows against the US dollar.

Listen on SoundCloud , Blubrry & iTunes. Watch on YouTube below

Thus far,emerging markets concerns have centred around Argentina, and Turkey.However other countries are now beginning to show the strain, with the South African Rand, and the Brazil Real, both hitting multi year lows.

Further evidence of contagion is perhaps the most worrying aspect of the emerging market decline, withthe IIF’s chief economist,in a report from the Telegraph, noting(link)

“rising global interest rates beg the question whether Argentina is an idiosyncratic case or a harbinger of things to come. We worry it might be the latter”

With all the ongoing turmoil, perhaps now serves as a good time to highlight to role gold could play in managing such a situation. If the Central Bank of Argentina, for example, had been slowly accumulated gold each month, like Russia or China, instead of holding their reserves in US dollars, thenmost of their current woes could have been avoided. (16 year chart of gold in Argentinean Peso,ARS, courtesy of goldprice.org). 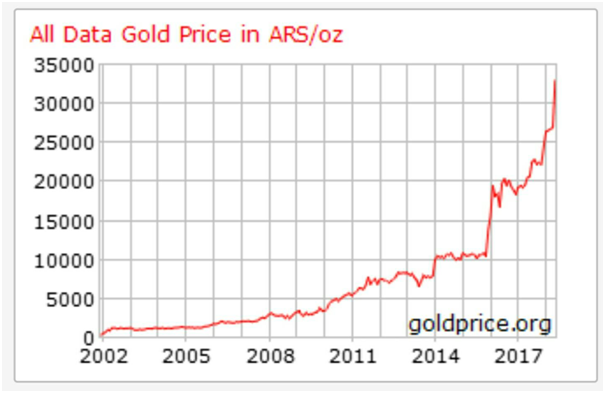 While this not a new revelation for most readers, it does serve as a point for reflection given the current turmoil. And while nobody knows for certain what the future holds, the case for holding gold today as the ‘ultimate hedge’, is undeniable.

In Italy, the newly formed ‘Five Star’ and ‘League’ coalition agreed on a set of policies to be finalised by their members on Sunday. This excludes an earlier plan to cancel ?250 billion worth of debt, but includes measures to cut taxes and boost spending.

Italian yields had been rising all week, and continued to move higher even after the revised policy was released, with the underlying 10-Year bond plunging lower.(Charts courtesy of Stockchart.com). 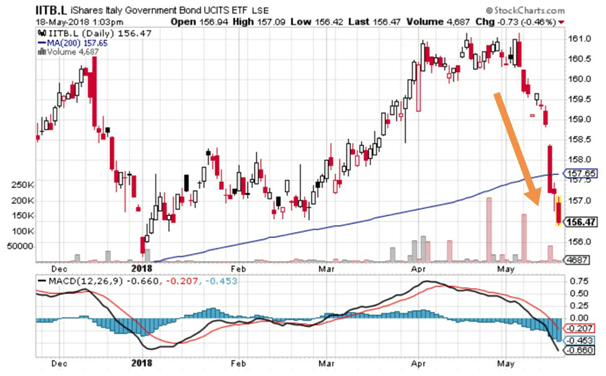 This marks the first time an anti-establishment government has come into power in one of the founding Euro nations, setting a daunting precedent for Brussels, as the Guardiannotes, (link)

“some analysts fear that if the radical new government they elected does push ahead with its promised policies, the result could be a Greek-style banking and debt crisis in the Eurozone’s third-largest economy”

Contagion is starting to show in neighbouring countries with the 10-yearyield in Portugal hitting a two month high. Markets seemvery concerned with the prospect of fiscal spending, tax cuts, and debt renegotiations, at a time when Europe’s 3rd largest economy already has a debt to GDP ratio of 131.8%. 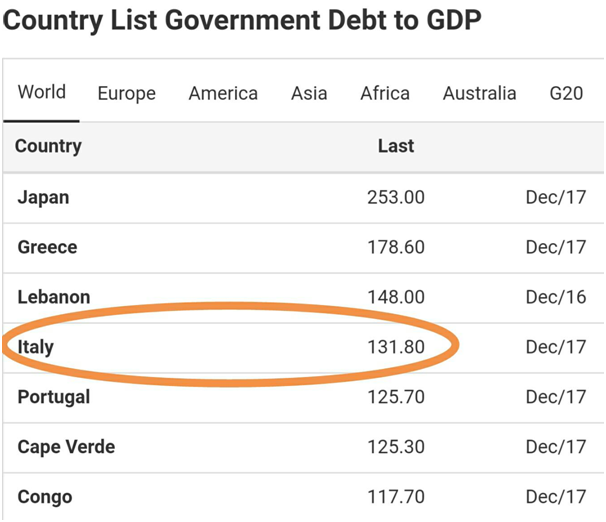 The current situation in Europe, has very much the same characteristics as the Greek debt crisis, but on a much larger scale. And for people holding wealth in Euros, now could be a good time to seek protection in gold and silver.

In economic data this week, Japan reported weaker than expected GDP growthon Tuesday,down 0.2% QoQ, and down 0.6% on an annualised basis – quite a miss on expectations, and the biggest decline since 2015. Weaker global demand for ‘smartphones’ were attributed to the drop in exports, and reluctance of the business owners to restock for the drop in capital expenditures. In an interview with Bloomberg, Hiroaki Muto, chief economist, Tokai Tokyo Research Centre, noted the following(link)

“What I’m concerned about is overseas demand. Exports are slowing down, which us line with the consensus, but they slowed to 0.6%. If this trade-friction-like condition becomes the norm. I think this will move from an economic soft patch to a recession”

Listen on SoundCloud , Blubrry & iTunes. Watch on YouTube below

In the US, the Philadelphia Fed Manufacturing Index beat expectations, on Thursday, with the Indexjumping to 34.4vs consensus estimate of 21.0- with the new orders index the highest since 1973.It will be interesting to see whether this an anomaly on the data,a sign of economic strength,or just further indication of growing inflationary pressures.

While the data has been mixed, the overriding tone points to a weakening global economy, and building inflation.Should the data continue to disappoint, and the global yield disparity continue to widen, at some point the Fed will be forced to re-evaluate its ‘dot-plot’ on future rate hikes, and realign to a more accommodative global policy.

Looking at the technical picture in Gold, we can see from the below chart the 200 dma failed to hold as support. However, as is quite often the case, gold tends to break major technical support, only to recapture it a couple of weeks later. (Charts courtesy of Stockcharts.com). 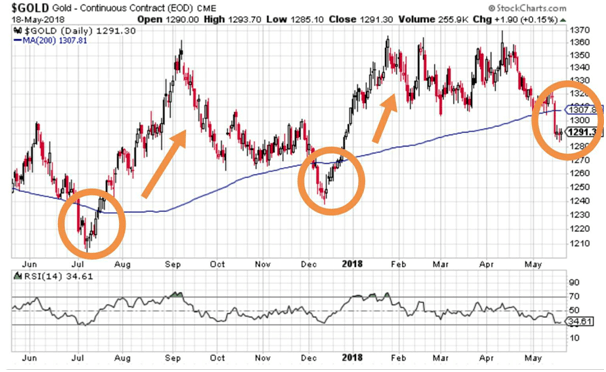 While there are no guarantees this will happen again, it’s interesting to note this phenomenon especially at a time of seasonal weakness for the precious metals, where they tend to find bottom May/June only to recover strongly in Q2 – a topic that was covered in greater in a previous article (5th May).

The case for a potential seasonal low is further bolstered by the latest COT reporting. Which shows the commercials (typically the smart money) adding 14,339 long contracts, while at the same time reducing 2,556 short contracts.

While historically, the commercial’s positioning is not yet outright bullish, this is certainly a healthy development for the coming weeks ahead. (Data provided from Goldseek.com) 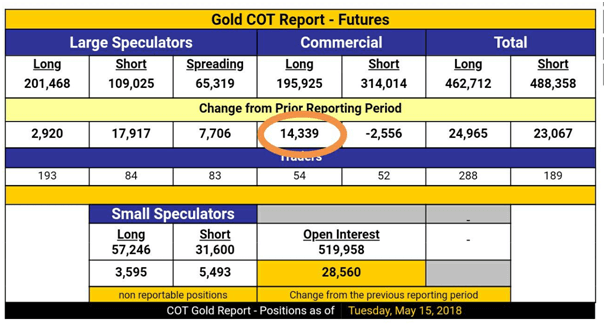 Looking to economic data next week, investors should watch US’Home Sales’, and ‘Durable Goods Orders’,for latest on consumer and business strength.The FOMC releases it’s latest minutes next Wednesday, which will be interesting to see if they acknowledge the recent weakness in the data. And finally investors should note the latest CPI and GDP numbers from the UK to see if the latest BOE decisionnot to raise rates was fully justified.

Investors should keep a close eye on developments with North Korea, and latest trade talk negotiations with China. On North Korea the prospect of a June 12th summit is looking uncertain with reports the US were looking apply the ‘Libya Model’ before proving concessions. This angered the North Koreans putting upcoming meeting in jeopardy.

On China, trade talks are taking positive steps forward with suggestions a $200 billion package has been proposed by the Chinese to help reduce the trade deficit. However as of Saturday the 19th the deal US yet to be acknowledged by either side. But as always these developments move quickly, and the key will be in the detail.

And finally, in addition to emerging markets, developments in Europe should be closely followed, with Italian 10-Year on centre stage. The marketplace will be looking at the yields in neighbouring countries, as well as EUR/USD, to see if the policies of the newly formed ‘5 Star’ and ‘League’ coalition are starting to impact the rest of the Eurozone.