Just check out the chart below.  It comes from the Heritage Foundation, and it shows that 69 percent of all federal money is spent either on entitlements or on welfare programs… 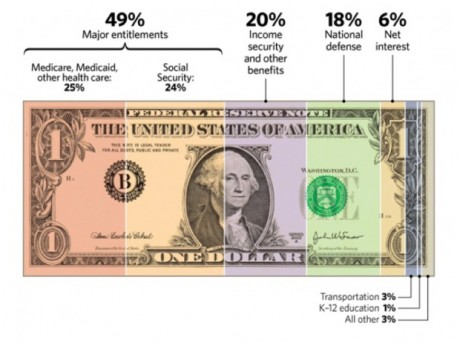 So when people tell you that the main reason why we are being taxed into oblivion is so that we can “build roads” and provide “public services”, they are lying to you.  The main reason why the government taxes you so much is so that they can take your money and give it to someone else.

We have become a nation that is completely and totally addicted to government money.  The following are 18 stats that prove that government dependence has reached epidemic levels…

#1 According to an analysis of U.S. government numbers conducted by Terrence P. Jeffrey, there are 86 million full-time private sector workers in the United States paying taxes to support the government, and nearly 148 million Americans that are receiving benefits from the government each month.  How long can such a lopsided system possibly continue?

#3 The U.S. government has spent an astounding 3.7 trillion dollars on welfare programs over the past five years.

#4 Today, the federal government runs about 80 different “means-tested welfare programs”, and almost all of those programs have experienced substantial growth in recent years.

#6 While Barack Obama has been in the White House, the total number of Americans on food stamps has gone from 32 million to nearly 47 million.

#8 It sounds crazy, but the number of Americans on food stamps now exceeds the entire population of the nation of Spain.

#10 According to a report from the Center for Immigration Studies, 43 percent of all immigrants that have been in the United States for at least 20 years are still on welfare.