The European Union has been plagued with years of falling inflation and stubbornly high unemployment.

And now its central bank is attempting to employ “unconventional” policies to kick-start the economy.

But if we look at the history, we’ll see the perfect opportunity to profit…

But the real kicker…

It’s a move no other major central bank, not the Fed, not the Bank of England, not even the Bank of Japan, has yet tried.

So what’s the goal, and will it work? As it turns out, we can gather clues from some precedents.

The Velocity of Money Is a Problem

The ECB is similar to the U.S. Federal Reserve in that it issues the official currency, the euro. It also sets interest rates to help guide the economy, and it supervises commercial banks. But its top job is to keep inflation under control. The Fed has similar goals, yet has a “dual mandate” that includes seeking low inflation and high employment.

So let’s look at the problems the ECB faces.

Europe’s been mired in a “low-flation” state since 2011, with inflation actually decreasing over the past two and a half years to 0.5% in May, considerably under the 2% target. 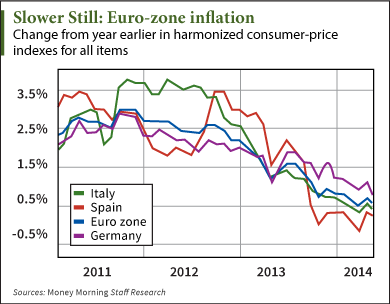 This can be a problem in that, if it goes on for an extended period, markets will begin to expect falling prices, or deflation. Those expectations can drive consumers to delay spending as they assume they can buy things for less in the future, thereby retarding consumption.