The most direct route for a risk position in natural gas is via the futures and options that trade on the NYMEX division of the Chicago Mercantile Exchange. However, the United States Natural Gas Fund (UNG) provides an alternative for those who do not venture into the volatile and highly leveraged world of the futures arena. At the end of last week, a hurricane was approaching the Florida coast, which caused the price of natural gas to rally.

A storm causes buying in the energy commodity

In anticipation of the arrival of Hurricane Dorian along the east coast of Florida over the long Labor Day weekend holiday, the price of natural gas moved higher last week. 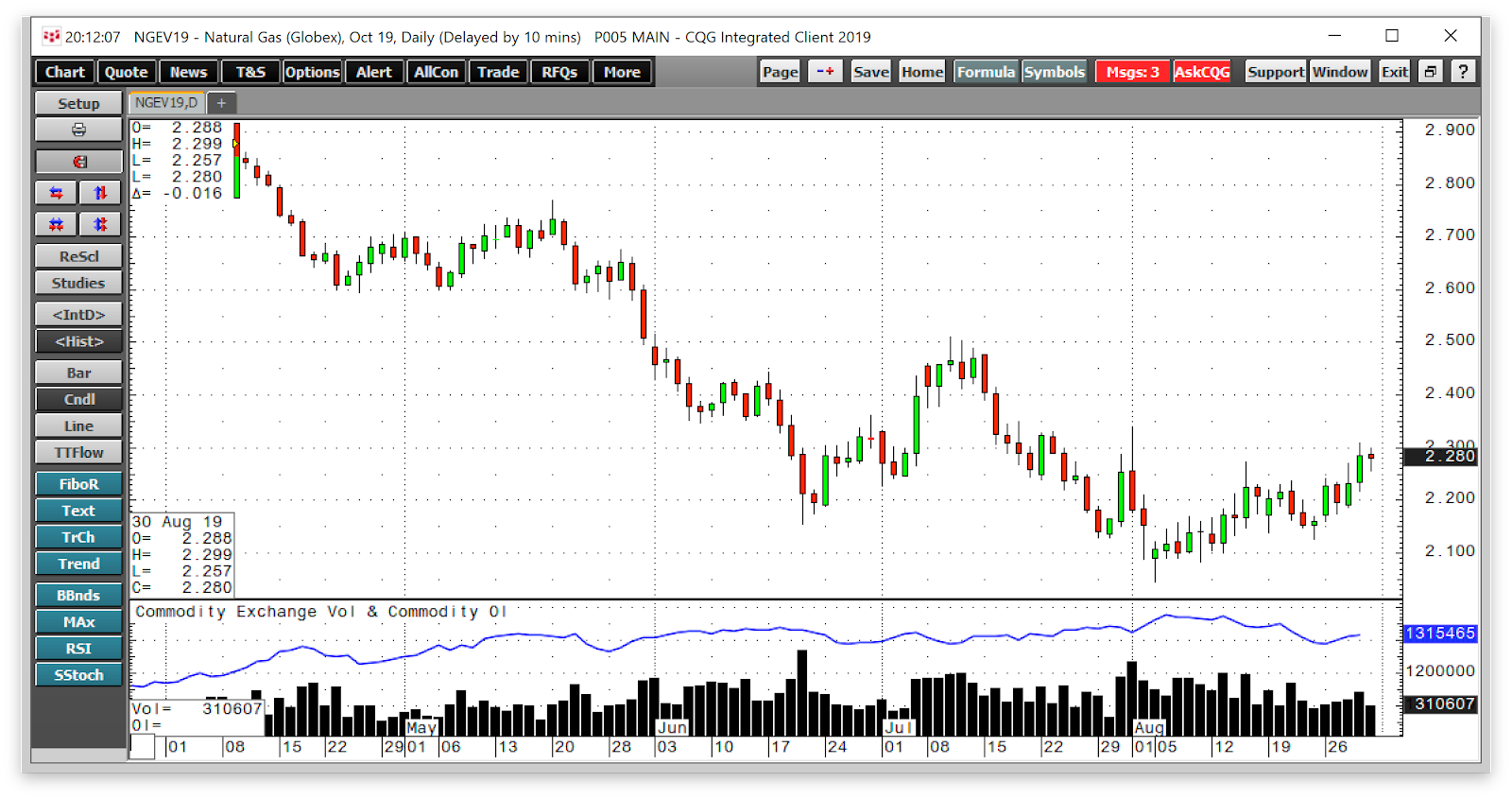 As the daily chart of October futures illustrates, the price has been edging higher since reaching a low at $2.045 in early August. On Thursday, August 29, the price of the energy commodity reached a peak at $2.31 per MMBtu and closed the week not far below that level at $2.285. While the projections called for the storm to make landfall as a Category Four hurricane, the price could not close the week above the $2.30 level. It also failed to challenge the critical level of technical resistance at just above $2.50 per MMBtu.

The open interest metric has declined from 1.375 million contracts in early August to 1.315 million at the end of last week. The decline in the total number of open long and short positions in the NYMEX futures market is two-fold. First, some market participants holding short positions likely closed out risk as the storm approached the US. Second, the metric likely declined as September futures rolled to October.

Inventories continue to trickle in

On Thursday, August 29, the Energy Information Administration reported that the amount of natural gas in storage across the US rose by 60 billion cubic feet to 2.857 trillion cubic feet. While stockpiles are 14.6% above last year’s level at this time, they remain 3.4% below the five-year average.

With eleven weeks to go until the start of the 2019/2020 withdrawal season in mid-November, stocks need to rise by an average of 35.5 bcf each week to reach last year’s peak at 3.247 tcf. Last November the price traded to a high at $4.929 per MMBtu, more than double the current price level. The highest price for this coming winter season was at $2.588 as of last Friday. Stocks will be higher at the start of the peak season for demand compared to the previous year. However, they will likely be well below the record level of over four tcf from recent years.

August was a bearish month in the natural gas futures arena. The price of the energy commodity dropped to its lowest level since 2016. There are two months left in the 2019 hurricane season. Any storm that threatens the Gulf of Mexico could cause rallies. At the same time, the uncertainty of demand during the winter season is likely to lift the price of natural gas as the winter season approaches. The Labor Day holiday weekend is a reminder that the summer will soon fade into our rearview mirror and the cold of winter is ahead.