But just like in 2008, the Federal Reserve and our top politicians will continue to deny that a major economic downturn is happening for as long as they possibly can.

In this article, I want to look at more signs that a dramatic shift is happening in our economy right now. 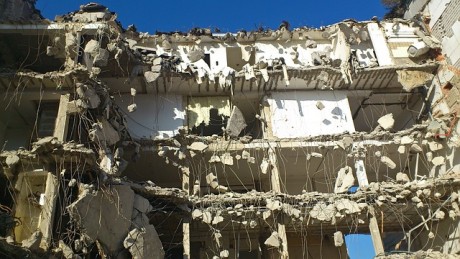 First of all, let’s consider what is happening to hedge funds.  For many years, hedge funds had been doing extremely well, but now they are closing up shop at a pace that we haven’t seen since the last financial crisis.  The following is an excerpt from a Business Insider article entitled “Hedge funds keep on imploding” that was posted on Wednesday…

BlackRock is winding down its Global Ascent Fund, a global macro hedge fund that once contained $4.6 billion in assets, according to Bloomberg’s Sabrina Willmer.

“We believe that redeeming the Global Ascent Fund was the right thing to do for our clients, given the headwinds that macro funds have faced,” a BlackRock spokeswoman told Business Insider.

The winding down of the Ascent fund is the second high-profile hedge fund closing in 24 hours. The Wall Street Journal reported Tuesday that Achievement Asset Management, a Chicago-based hedge fund, was closing.

And those are just two examples.  Quite a few other prominent hedge funds have shut down recently, and many are wondering if this is just the beginning of a major “bloodbath” on Wall Street.

Another troubling sign is the implosion of so many energy companies.  Just like in 2008, a major crash in the price of oil is hitting the energy sector really hard.  Just check out these stock price declines…

-Southwestern Energy down 68.11 percent over the past 12 months

-Chesapeake Energy down 73.98 percent over the past 12 months

A number of smaller energy companies have already gone out of business, and several of the big players are teetering on the brink.  If the price of oil does not rebound significantly very soon, it is just a matter of time before the dominoes begin to fall.

We are also seeing tremendous turmoil in the retail industry.  The following comes from Investment Research Dynamics…

The retail sales report for October was much worse than expected.  Not only that, but the Government’s original estimates for retail sales in August and September were revised lower.  A colleague of mine said he was chatting with his brother, who is a tax advisor, this past weekend who said he doesn’t understand how the Government can say the economy is growing (Hillary Clinton recently gave the economy an “A”) because his clients are lowering their estimated tax payments.  Businesses lower their estimated tax payments when their business activity slows down.

The holiday season is always the best time of the year for retailers, but in 2015 there is a lot of talk of gloom and doom.  Most large retailers will not start announcing mass store closings until January or February, but without a doubt many analysts are anticipating that once we get past the Christmas shopping season we will see stores shut down at a pace that we haven’t seen since at least 2009.  Here is more from the article that I just quoted above…

Retail sales this holiday season are setting up to be a disaster.  Already most retailers are advertising “pre-Black Friday” sales events.  Remember when holiday shopping didn’t begin, period, until the day after Thanksgiving?  Now retailers are going to cannibalize each other with massive discounting before Thanksgiving.  Anybody notice over the weekend that BMW is now offering $6500 price rebates?   The collapsing economy is affecting everyone, across all income demographics.

Last week we saw the stocks of Macy’s, Nordstrom and Advance Auto Parts do cliff-dives after they announced their earnings.  I mentioned to a colleague that the Nordstrom’s report should be the most troubling for analysts.  Nordstrom in their investor conference call said that they began seeing an “unexplainable slowdown in sales in August in transactions across all formats, across all catagories and across all geographies that has yet to recover.”

I think that a chart would be helpful to give you an idea of how bad things have already gotten.  Jim Quinn shared this in an article that he just posted, and it shows the change in retail sales once you remove the numbers for the auto industry.  As you can see, the numbers have never been this dreadful outside of a recession… 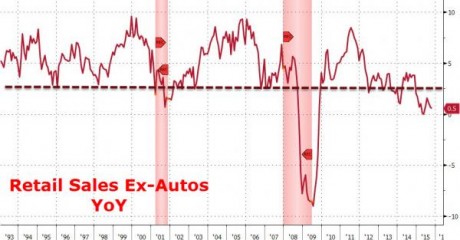 But stocks went up 247 points on Wednesday so everything must be great, right?

The stock market has never been a good barometer for the overall economy, and this is especially true these days.

In 2008, stocks didn’t crash until well after the U.S. economy as a whole started crashing, and the same thing is apparently happening this time around as well.

One of the things that is keeping stocks afloat for the moment is stock buybacks.