I previously called for a pullback in gold and on the SPDR Gold ETF (NYSE:GLD) on June 19th after (NYSE:GLD) hit $123.50 on June 18th.  Since then (NYSE:GLD) has retreated to as low as $113.08.  Is now the time to buy?  Obviously, that depends on your timeframe and I like to focus on moves that could last from a few weeks to several months. (GLD) currently has a trend score of +75 which indicates a new uptrend may be underway. As others have noted, September is historically a strong month for gold.  While the intermediate trend began souring in June, the metal remains in a strong long-term uptrend and the short-term trend shows signs of a reversal.

I’ve observed that the recent downward trend has followed Fibonacci levels very closely, which could give technical traders some guideline for when to enter a long position in (GLD).  As you will see in the chart below, the 50% retracement level from the February low was nearly touched on July 28th, before the recent reversal.  In addition, last Friday’s high met resistance just below the 23.6% retracement level which also closely aligned with the 50 day moving average.

For those not currently long (GLD), I think an important level to watch if you are looking for a price level to enter a long position would be if (GLD) closes above $118.54, which is above the 50 day moving average and the 23.6% retracement level.  A close below $112.92 could indicate further weakness and a next support level near $110.41. 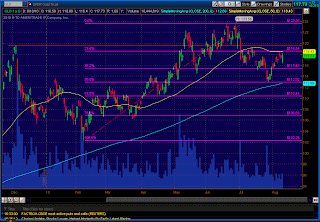 For more articles on the SPDR Gold ETF visit our (GLD) category: HERE