For most of the past eight weeks, the financial media have been attempting to tilt the scales of conversation away from the weak macro backdrop in favor of the new initiative on Afghanistan and/or the Trump White House and/or domestic and international terror. As stocks rally in the face of flat earnings growth and rising P/Es, I have noticed an unwavering tendency for dips to be bought firstly by the pre-programmed computer programs, then by traders, and finally by the investing public who continue to behave as instructed by the Behavioral Architects that reside within the Working Group on Capital Markets and execute through the N.Y. Federal Reserve. Similarly, gold now above $1,300 and silver above $17.10 have in the past been faded like old swimsuits as all eyes are glued to the rising open interest and bullion bank aggregate short positions that are historical precursors for criminal takedowns.

As we head into the final week of August with the kiddies all headed back to school, I wonder whether or not the world of stock trading has finally assumed the role of an RPG not unlike Final Fantasy or Grand Theft Auto.

The chart below tells me that stocks are certainly not cheap and are indeed fraught with risk. That is based upon years upon years of data that, as you can all see so clearly, suggests that the current market ranks in the top three most overvalued markets in the past 100 years. Only the insanity of the dot.com bubble of 1999 that created billionaires out of garage floor entrepreneurs and the drunken orgies of stock-buying binges made famous by the likes of Livermore and Baruch comes close to exceeding the ridiculous valuations seen today. It also explains why the Serial Manipulators at central bank trading desks around the globe are so obsessed with keeping a lid on gold and silver. Like the addict protecting that last hit of junk, the central bank price managers are desperately and defiantly keeping a vice-grip lock on stocks and the precious metals knowing full well the dire ramifications of a meltdown/melt-up outcome for stocks/gold.

Now, given the level and tenacity of these interventions, how can it be even vaguely possible to initiate positions that are counter to the full faith and credit of the sovereign treasuries? How can you possibly get an edge on a bullion bank trader sitting in NY or London or Tokyo with a margin facility of several billion dollars and full authorization to ensure gold does not break out above $1,310 and silver remains capped at $17.10? What I have found over the years is that the level of aggregate shorts held by the bullion banks offers clues to the duration of any up or down move but it in no way predicts the amplitude of the move. For that reason, the past three weeks have seen a sharp increase in Commercial long liquidation coupled with accelerated shorting but the aggregate number of shorts is still well below the level seen at major tops in the summer of 2016 and with gold approaching U.S.$1,400 per ounce. The risk in this assumption that the U.S. Dollar index ($USD) is about to stage a reversal to the upside, forcing the algo’s to sell gold. Observe this chart:

The problem with the “rallying U.S. dollar” concept is that as long as the U.S. economy continues to produce sub-par inflation numbers, the Fed will forego the rate hikes because the U.S. banking system needs inflation in order to underpin the collateral held by the member banks against which they have trillions of dollars in loans. As you can see, the USD is nowhere near oversold and in fact looks like it is ready to roll over. So, if we do not get a USD rally, then it will be up to the Interventionalists to find another cover story to explain why gold and silver are pulling back or else the odds favor a continuation move to the upside until the end of November. 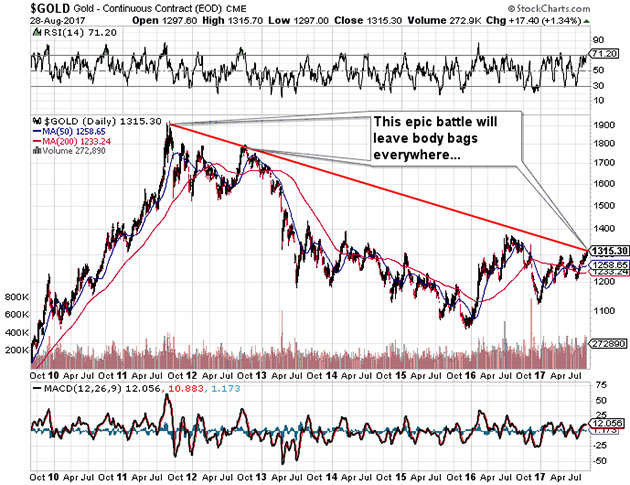 Shown below is the breathtaking ascent in the Geek Squad’s answer to fiat currencies–Bitcoin. You will recall all of the table-pounders from 2001 calling for $4,000 gold and $400 silver and were able to show us all just how frail were the underlying fundamentals for the big five currencies–dollar, euro, pound, yen, and Swiss franc. Not only were these erudite thinkers correct, they were spot on as gold took off from the 1999 low around $250/ounce reaching over $1,900 by 2011. Since then, the price managers exhibited their OCD with great aplomb as they perpetually carpet-bombed gold and silver while completely missing the creation of the ultimate, untraceable, uncontrollable, manipulation-immune alternative currency called Bitcoin and all of the Bitcoin wannabe’s that fall into the category of “cryptocurrencies.” Since the central bankers all recall the immortal words of former Fed Chairman Paul Volcker who reflected back to his tenure in the 1980s by admitting error in “not controlling the gold price,” the Geeks decided to step around the CBs and run a “covert op” alternative currency–and it has worked beautifully. 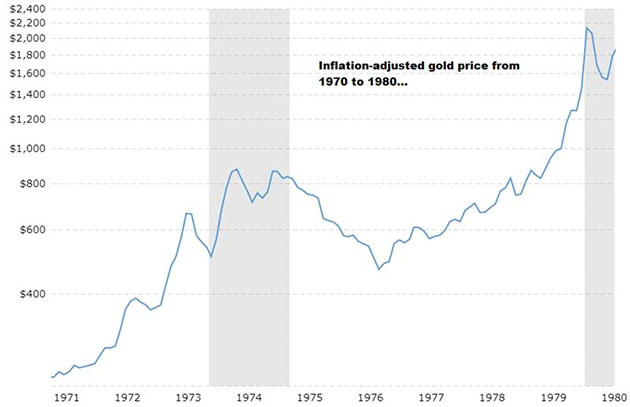 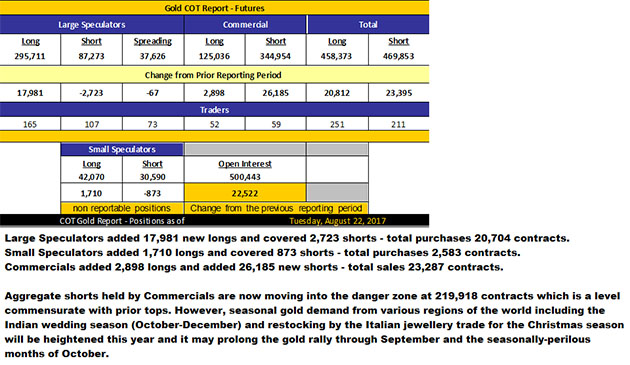 Gold’s enormous breakout will have all of the technicians salivating but the real question is how long it takes the Commercials to exert their criminal influence over the near-term price action. In my earlier comments, I predicted an epic battle of seasonal demand pitted against interventionalist supply for the upcoming September-November period and today’s price action confirms it. Beware of the “technical breakout” at all costs and use tight stops at all times.

IAU currently has an ETF Daily News SMART Grade of A (Strong Buy), and is ranked #2 of 35 ETFs in the Precious Metals ETFs category.