A 9.0-magnitude earthquake rocked Japan on Friday March 11, prompting a 30-foot tsunami slamming the country’s northeast coast. Media reported that one major oil refinery was caught fire while nearly a dozen nuclear plants were shut down leaving Millions of buildings around Tokyo without power. 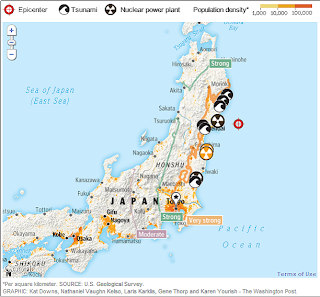 Crude oil saw a pullback breaking the recent uptrend from the Libya and Middle East unrest.  Reuters reported that there were six refineries that account for 31% of Japan’s output shut down after the quake and it was unclear when they would reopen.  Some media reports suggested the crude oil price drop is largely due to expectation that these refinery shutdowns could mean less imports of oil.

So, not surprisingly, I received an email asking whether the drop of crude oil is related to Japan’s devastating earthquake, or more the result of the mass rollover from United States Oil ETF (NYSE:USO) and the triple expiration as discussed in my previous post.

While there’s not one easy answer, a good place to start is to review some oil barrel statistics of Japan.

Based on the U.S. EIA data, Japan imported 4.7 million barrels a day (bpd) in 2009, with total oil refining capacity of 4.6 million bpd at 29 facilities as of January 2010. According to Reuters, the six refineries that are shut down have a total capacity of 1.40 million barrels per day (bpd).  That’s about 1.6% of the 89.3 million bbl/d global 2011 product demand forecast by the International Energy Agency (IEA).

While Japan is the second-largest net importer of oil in the world after the United States in 2009, the estimated import disruptions due to the earthquake does not appear significant enough to sway world’s crude oil market.

From various indications, the drop of crude price after Japan’s earthquake could be partly attributed to the  knee-jerking reaction to a devastating natural disaster, some risk-off profit taking, USO starting its rollover on March 8, and the fizzled “Day of Rage” protest in Saudi Arabia.

However, the major catalyst for the downward pressure on crude oil before and after the Japan earthquake was the surprise trade deficit number–$7.3 billion, the largest in 7 years–coming out of China signaling an possible economic slowdown.

Japan to Increase Energy Imports after the quake

On the other hand, since about 25% of Japan’s electricity is coming from nuclear, the resulted power shortage due to closures of a dozen nuclear reactors after the quake suggests Japan will likely need to increase its imports of petroleum products and other energy sources (See Chart). 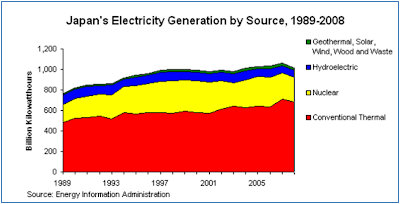 The country’s power generation relies mostly on coal and natural gas, which means there will be an increase in imports of diesel (to power generators), and other petroleum products (since part of its domestic production is offline), along with natural gas/LNG, and coal, just to keep the the entire nation going in the aftermath.

So, the oil import disruption at Japan is unlikely to wrangle an upward momentum out of crude oil.  However, the Japanese refinery shutdown happens to coincide with planned shutdowns of crude units led by China and Japan that will cut 2.12 million barrels of output a day, or 6.8% of the region’s total, in the April-June quarter, according to Reuters.

Moreover, the second quarter is the typical refinery turnaround season with a substantial amount of crude processing capacity offline.  As such, there could be a tightening of the global petroleum products market, and spikes in the prices of petroleum products including gasoil (diesel), gasoline, along with LNG and coal prices.  This will likely benefit other Asian refiners in South Korea, Taiwan and China and oil majors such as Shell (RDS) with refineries in the region.

Meanwhile, construction, engineering and industrial material and equipment companies should also benefit from the massive rebuilding effort in Japan.  And some analysts also see a technology product price spike and supply crunch since Japan is a major high tech center of the world that could impact earnings in the tech sector.

Now, turning back to the crude market in the week ahead, escalating call option trades (see chart)—the highest since July 2009–suggest the major rollover action is yet to occur.

Since there’s not a real physical supply shortage, and Cushing is brimming with crude unable to take delivery, more downside could be expected in the April crude contract from March 15 to March 22 with the triple expiration on ICE and NYMEX, which would further pressure both WTI and Brent. 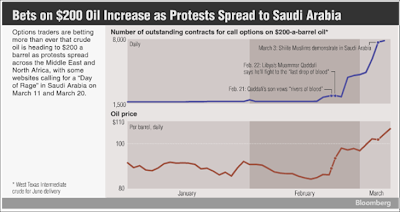 Besides crude oil, I think the biggest story out of this international disaster for the energy sector is the near materialization of the greatest obstacle and fear of the nuclear power – a possible nuclear reactor meltdown.

As of this writing, Japan is still struggling to contain the situation, and has resorted to using salt water to cool two reactors at Fukushima Plant. The reactors were damaged by the earthquakes, and could be at risk of meltdowns and spreading radiation.

The U.S. has 104 nuclear reactors producing 799 billion kWh in 2009, or over 20% of total electrical output, according to World Nuclear Association. Although the US is the world’s largest producer of nuclear power, accounting for more than 30% of worldwide nuclear generation of electricity, very few new reactors were built in the past 30 years after the Three-Mile incident in 1979.

However, despite big obstacles like cheap natural gas, high project costs and the Great Recession sapping demand in recent years, nuclear power was staging a comeback when President Obama’s 2012 budget proposed $36 billion in loan guarantees to build nuclear power plants. The industry is expecting 4-6 new units to come on line by 2018, a result of 16 license applications to build 24 new nuclear reactors made since mid-2007.

Now, the little progress the U.S. nuclear power sector has made in the past three decades could see a major setback, if not a completel decimation, by the worst nuclear accident in Japan’s history.  There will likely be a more major regulatory scrutiny, and a seismic shift in the global energy mix where more resources will be pouring into natural gas, clean coal and renewable….instead of nuclear.

In a way, Fukushina is the Deepwater Horizon of the nuclear power sector, and it is fair to say it might take another 20 years of zero incident to get nuclear power back into the energy fold.

On that note, future investments in nuclear power could be even harder to come by, and companies like NRG Energy (NYSE:NRG) and Southern Company (NYSE:SO) may need to scrap or write off their planned nuclear power projects, which could impact their forward earnings, and stock valuation.

While the world is still in shock watching this tragic disaster still unfolding on TV, different sectors will likely experience different impacts from this unprecedented event.

In this case, it is most likely a non-event for the crude oil, and the nuclear power basically has met its Deepwater Horizon.  Likewise, other Asian refiners and companies specializing in infrastructure building could get an unexpected boost in their business, while consumers would likely feel the pinch in the form of higher fuel and technology product prices.