Just Eat Takeaway.com (LON:JET) had its price objective dropped by stock analysts at Barclays from GBX 8,910 ($120.94) to GBX 7,130 ($96.78) in a report released on Thursday, Analyst Price Targets reports. The firm presently has an “overweight” rating on the stock. Barclays‘s target price indicates a potential upside of 78.72% from the company’s previous close.

Other research analysts have also issued research reports about the stock. JPMorgan Chase & Co. reduced their target price on shares of Just Eat Takeaway.com from GBX 6,527 ($88.60) to GBX 6,285 ($85.31) and set an “overweight” rating on the stock in a research note on Thursday. Deutsche Bank Aktiengesellschaft reaffirmed a “buy” rating on shares of Just Eat Takeaway.com in a research note on Tuesday, October 19th. One analyst has rated the stock with a sell rating, one has issued a hold rating and seven have issued a buy rating to the company’s stock. According to data from MarketBeat.com, the company has an average rating of “Buy” and a consensus target price of GBX 8,751.36 ($118.79). 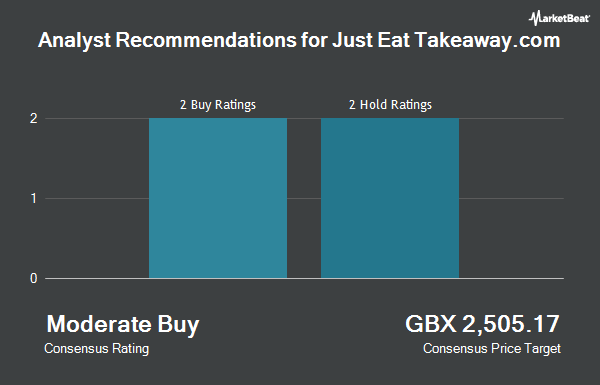