Sometime between early February and early April the market should drop down into a major yearly cycle low. Last year that cycle low came during the first week of February.

Since the current daily cycle is now in the timing band for a bottom we should see an intermediate top fairly soon. 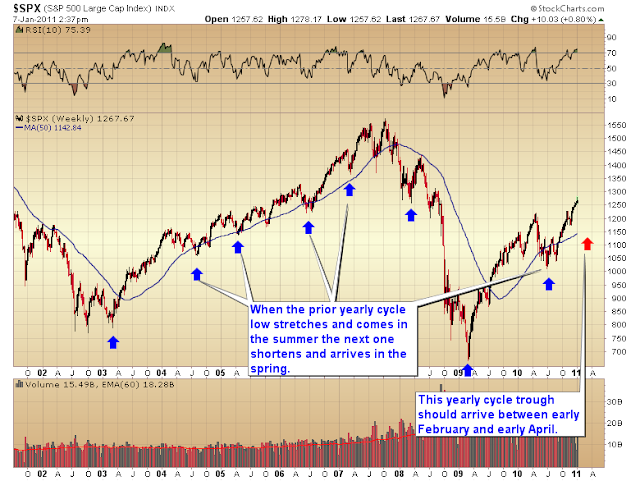 Yearly cycle corrections are major corrections, only exceeded by the four year cycle low in severity. So once the correction begins it should be a doozie. The severity of the impending correction will tell us whether the cyclical bull is on it’s last legs or not.

If the correction retraces back to or maybe a little below the 200 DMA then it will be a normal intermediate correction within a cyclical bull market.

If, however, the market were to retrace all of the autumn rally and test the summer lows that will be a very strong sign that all the stimulus and money printing was for naught.

Keep in mind the next four year cycle low is due sometime in 2012. And since bear markets tend to last about a year and a half I strongly suspect this cyclical bull will top sometime this year.

As a matter of fact the market is already potentially forming a megaphone topping pattern. This pattern of wildly expanding volatility is caused by the underlying debt cancer and inflation trying to pull the market down while at the same time the Fed tries to counter the bear market forces with ever larger monetary stimulus.

The result is a market being whipped back and forth in larger and larger swings. In the end the Fed will fail and the next leg down in the secular bear will begin, only this time will be much worse than the last one. All the Fed will have succeeded in doing is making the problem bigger.

I would suggest if one has retirement funds still invested in the stock market they get them out and back into a money market at this time until we see just how far down the market drops as it moves into the yearly cycle trough.

Written By Toby Connor From Gold Scents  GoldScents is a financial blog  focused on the analysis of the stock market and the secular gold bull market.