A reading of the economy from Morgan Stanley is signaling “June gloom.”

Morgan Stanley’s Business Conditions Index, which captures turning points in the economy, fell by 32 points in June, to a level of 13 from a level of 45 in May. This drop is the largest one-month decline on record and the lowest level since December 2008 during the financial crisis, according to the firm. 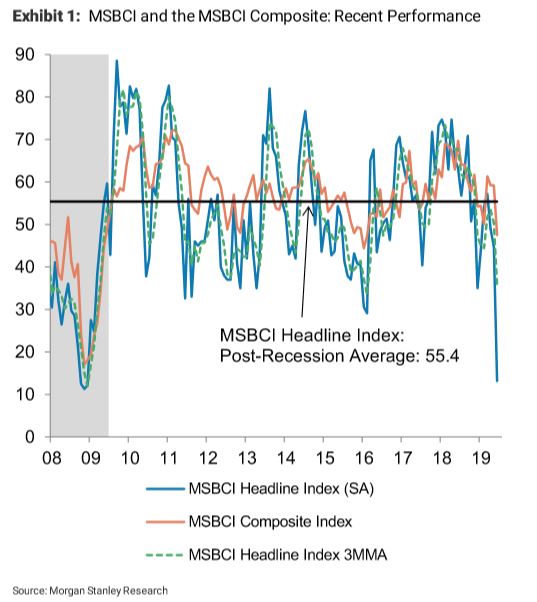 “The decline shows a sharp deterioration in sentiment this month that was broad-based across sectors,? economist Ellen Zentner said in a note to clients. “Fundamental indicators point to a broad softening of activity, but analysts did not widely attribute the weakening to trade policy.”

Fears of a possible economic slowdown were raised last week after a much worse than expected jobs report. The economy added just 75,000 jobs in May, according to the Labor Department last Friday. A report Thursday showed a spike in jobless claims last week. Manufacturing activity last month grew at the slowest pace in two years.

Worries about a trade deal getting passed between the U.S. and China weighed on stock markets in May. Perversely, that weak sentiment actually boosted equities this month because traders are hoping the Federal Reserve will cut interest rates. But some investors are starting to worry that the economy could fall into an outright recession.

The manufacturing subindex business conditions fell sharply to zero, “a decline that was likely exaggerated by the recent turn lower in oil prices, while marking the lowest level for the subindex on record,” Zentner said.

The services subindex also fell to 18 from 35.