Natural gas posted the first weekly increase this month in the week of Nov. 14, on forecasts of colder than normal temperatures in most of the eastern U.S. from Nov. 24 through Nov. 28, which could spur an average 20 percentage rise above the normal heating demand.

Natural gas for December delivery—down 25 percent this year—gained 9.6 percent in one week to settle at $4.164 per Mmbtu on the NYMEX.

However, this temporary seasonal strength does not alter the fact that U.S. gas stockpiles climbed to an unprecedented 3.843 trillion cubic feet in the week ended Nov. 12—9.3 percent above the five-year average level and 0.3 percent above last year’s level. (Fig. 1) 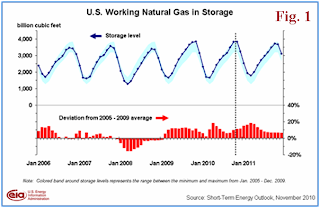 This storage glut has pushed U.S. natural gas at Henry Hub to its cheapest level in 11 months relative to Canadian gas (at 5 cents below), according Bloomberg data. Henry hub benchmark has been traded at an average of 85 cents premium to the Canadian benchmark AECO for the past 10 years.

As I said before that we are literally swimming in crude oil amid high inventory; but when it comes to natural gas, “drowning” would be a more appropriate description. While crude was hammered by China’s efforts to curb inflation, natural gas has an even bigger problem–nowhere to go–since it is region bound, and not as widely traded.

However, the drop in 2011 is not because of a decrease in shale gas production, but mostly a result of a 13.5-percent production decline in GOM production from the 2010 drilling moratorium. 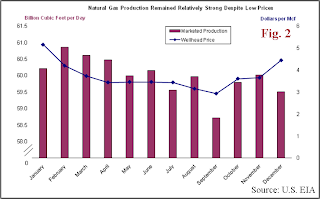 U.S. has seen a surge in natural gas output in the past two years (Fig. 2) with an increase in gas drilling from shale formations (Fig.3). During this time frame, the market equilibrium is distorted mostly by drilling activities supported through joint ventureswith foreign oil majors and national oil companies (NOCs), held by production lease (drill or lose), and producers’ favorable hedging positions. 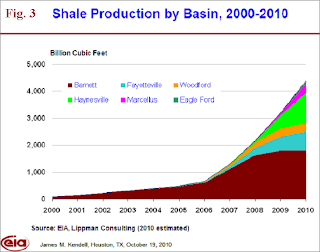 Gas Rig Count Has To Drop

Some industry experts estimate that gas rig count needs see as much as 20% drop–to around 750—from the current 936 (as of Nov. 19) in the next 12 months just to keep production from growing.

The actual number of rigs required to hold production flat could even be lower due to the increased efficiency of new generation high tech rigs, and pad drilling. 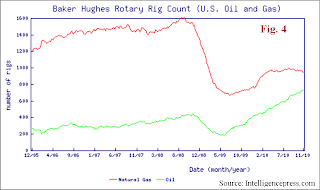 Now, looking ahead, this rig count correction could actually start to take place by mid next year supported by the following factors:

Unfortunately, the production boom for the last two years also means the price would remain sub-$5 for the next two years, amid the sub par GDP growth and demand outlook (Fig. 5)….unless several Katrina’s end up landing on the Gulf Coast. 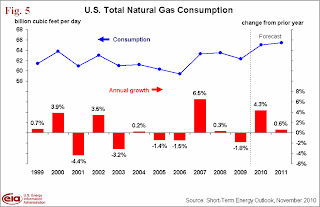 Gas abundance is not limited to the U.S. The latest World Energy Outlook report by the International Energy Agency (IEA) released in early November basically threw the entire natural gas market under the bus by predicting the glut will worsen next year and last for 10 years, which will only fade gradually as demand rises strongly in China.

Nevertheless, news is coming out of China that the nation might see its natural gas supply fail to meet 35 percent of the demand in 2011, and the shortage could persist through 2021, according to China Business News.

While several import facilities were planned and built (before unconventional gas even came into the picture) in anticipation of high LNG imports in the coming decades, the U.S. has very limited LNG export capability. That could be about to change.

There are two LNG export facilities announced this year–Freeport LNG and Australia’s Macquarie Bank have agreed to build one in Texas to export 1.4 billion cubic feet per day of gas, and Cheniere Energy‘s will be on the site of its Sabine Pass facility to export 16 million metric tons per year.  Both plan to produce and export LNG by 2015.

So, while natural gas’ green prospect is tied up in the legislative pipeline, it seems the more exciting aspect in the otherwise melancholy natural gas market could come from the LNG sector in the medium term.

About: Economic Forecasts & Opinions The theory of quantum mechanics and Einstein’s theory of relativity (E=mc2) have taught us that matter (yin) and energy (yang) are inter-related and interdependent. This interconnectedness of all things is the essence of the concept “yin-yang”, and Einstein’s fundamental equation: matter equals energy.  The same theories may be applied to equities and commodity markets. All things within the markets and macro-economy undergo constant change and transformation, and everything is interconnected.  That’s why here at Economic Forecasts & Opinions, we focus on identifying the fundamental theories of cause and effect in the markets to help you achieve a great continuum of portfolio yin-yang equilibrium.