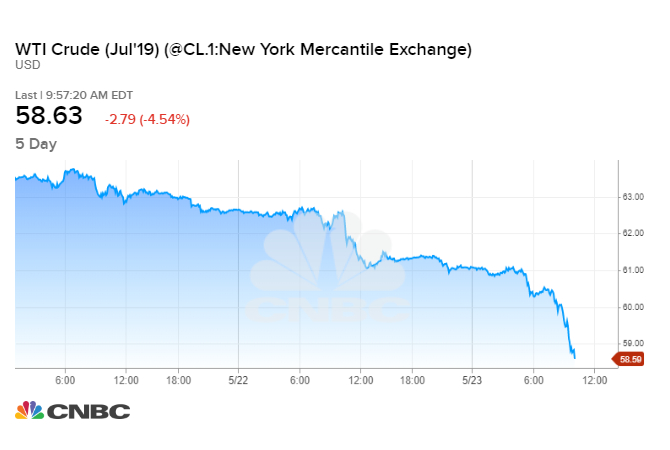 “After $60, really it’s right down around $58 or so. Theoretically, if this thing really becomes a washout, $52 is the downside objective,” he said, cautioning that the move would not happen overnight.

Crude futures fell with the stock market as the ongoing U.S.-China trade dispute entered a new phase. A wave of companies is suspending business with Huawei after the U.S. blacklisted the Chinese telecom giant.

Washington and Beijing are set to increase tariffs on hundreds of billion of dollars of one another’s goods, raising concerns about global economic slowdown and weaker demand for oil.

U.S. manufacturing activity grew at its slowest pace since September 2009 this month, according to IHS Markit.

“You’ve got the U.S.-China trade war just doing its damage across the board,” Kilduff said. “Crude was ready to take a hit on it all along except for the geopolitical tensions in the Middle East.”

Politico reported on Thursday that Democratic Sen. Dianne Feinstein met with Iranian Foreign Minister Javad Zarif a few weeks ago during a dinner arranged in consultation with the State Department.

The news follow the President Donald Trump’s meetings last week with the Swiss president and Secretary of State Mike Pompeo’s phone call with Oman. Both countries have served as intermediaries between the U.S. and Iran, sparking speculationthat the White House is trying arrange negotiations.

Pompeo also says the Trump administration has taken measures to prevent oil prices from spiking while it attempts to drive Iran’s crude exports to zero.

Beyond weak refinery demand for feedstock crude oil, the increase also came on the back of planned sales of U.S. strategic petroleum reserves (SPR) into the commercial market.

USO currently has an ETF Daily News SMART Grade of A (Strong Buy), and is ranked #1 of 110 ETFs in the Commodity ETFs category.