Best Online Trades:  The market is looking a bit exhausted at this point.  I issued a BOT Short Signal in my previous post because there seems to be enough evidence building up that says we should at a minimum do a gap fill of several days ago and maybe some more downside after that to work off the extreme overbought in terms of indicators but sentiment as well.

First before I forget, I wanted to mention that I happened to catch Glenn beck this past weekend except this time he was on television instead of radio.  The topic of his show was about how the dollar is going to absolutely collapse and how gold is going to go up 200 dollars.  He had some book author on who kept on ranting about how there will be a scenario of a total collapse of the dollar in 15 days and Glenn Beck had a white board up showing a timeline.

Anyway, my point in bringing this up is that Glenn Beck is starting to become an outstanding contrarian indicator.  In a post I did way back in early September 2010, Glenn Back was talking about the Hindenburg Omen stock market crash signal and this sentiment helped to mark the bottom.

But now, perhaps in a more indirect manner, he devoted his Sunday show and had two authors on talking about how the dollar is going to totally collapse 10 to 15% in a few days and gold will shoot up $200 in a day!

It could very well be that Glenn Beck is nailing the final low in the US dollar Index psychologically.  This could correlate to a possible nasty correction in the stock market and precious metals.

I have written about the US dollar index several times in recent weeks.  My main points were that the US Dollar was at triangle support of a 3 year supporting up trendline and it was critical we hold it.

But there was also a recent break down under the 3 year uptrend line and it caused me to consider the possibility that he US dollar would get crushed from here since it could violate under the trendline.  But in the same breath I also indicated that it was hard to conceive the US Dollar collapsing too much farther down from here given the extreme bearish sentiment and almost total lack of dollar bulls sentiment wise.  It may be that the sentiment issue will win out here. 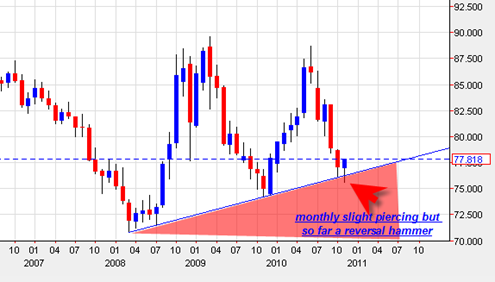 It is still very early in the November monthly price candlestick on the US dollar index to say that we have a confirmed hammer reversal.  But so far at least it is looking promising.

If it is going to be true that the US Dollar index is setting up for a monthly reversal then one has to consider how significant the reversal is and how long lasting it is.  Why? Because a significant monthly reversal in the dollar would seem to bolster the case of a more extended down more in the stock market.  At least this is the correlation that has been working for quite some time.  Whether or not the stock market can start to ignore this correlation is an open question.

Looking at Apple, Inc. (NASDAQ:AAPL) today of the move that began in early September 2010, it looks to me that Apple computer is trading higher in a ‘shortening of the thrust’ pattern.  This is a Wyckoff term which points out that (NASDAQ:AAPL) has had 3 advancing legs higher, but each one has been successively shorter and the break out to new highs has been successively WEAKER, especially the most recent one.  The RSI on Apple seems to be confirming the shortening of thrust and I think (NASDAQ:AAPL) breaks down from here.  I am seeing this in several other important stocks as well.

Gold and Silver had HUGE reversals today and tells me very clearly that they have topped out for now.  The volume seems to suggest climax buying and then violent reversals today.  Using gold and silver as leading indicators seems to support the case of a stock market correction as well.

Gaps act like support and resistance.  There are huge gaps on the SPDR S&P 500 ETF (NYSE:SPY) and the SPDR Dow Jones Industrial Average ETF (NYSE:DIA) and the several other ETFS.  The volume that comes into those gaps assuming we trade down into them and fill them will be important to watch.  If we trade into those gaps on much higher volume that they were created with it could become a problem later.

The percent of stocks above 50 day moving average chart is starting to curl down again now and could start to build more momentum to the downside next week.  This would seem to indicate that stocks are going to stall from here.

I already mentioned the bearish MACD histogram setup in my previous post to this one after I issued the BOT Short signal.

The summation index looks like it is double topping similar to the April 2010 top.

If I am correct that this is some type of top, the degree of it is unknown to me at this point.  We already know that we have monthly confirmed bullish buy signals on the MACD long term monthly chart.  But we still need to keep an open mind.  I have my 1975 scenario and S&P 500 blasting to 1300 or 1400 in my mind.  But we have to take the market as it comes and see what it wants to tell us.

The fact of the matter is that the sp500 is right at the April 2010 highs now on the monthly candlestick chart.  One of two things is going to happen here.  Either we continue to blast higher above the April 2010 highs on the S&P 500, OR we start to sell off into November and create a possible gravestone reversal doji or a hammer reversal candlestick on the monthly chart.

If that happens then it would seem to confirm a theory I had before which said that ‘a bunch of people are going to want to get their money back from the April 2010 highs’.  That could be the selling pressure we are seeing now in the S&P 500.

The daily MACD on the S&P 500 is starting to curl over down again after staying way up in the clouds.  I can guarantee you that at some point the daily MACD will return back to the zero line and that will mean that prices either trade sideways to consolidate or they head down a bit faster.

I don’t want to get too bearish too fast this time.  But I am on alert for more volatility and want to see if the market can show a much more meaningful sign of weakness as a clue to what might be next.

But the dollar is the big story and also bears close watching.  If it truly is doing a major monthly reversal then I don’t see how stocks and metals are going to be able to stay up given how lofty a run they have had.

In the short term I am expecting a GAP fill on the major ETFS, (NYSE:SPY),  (NYSE:DIA) and the Nasdaq Composite and NDX.  Then after the gap fill I am expecting some type of thrust up again, and then maybe another big down after that…

Lets see how much weakness can come into the market.  This market has been a stream train on steroids as of late…

I am temped to go long the Direxion Daily Technology Bear 3X Shares ETF (NYSE:TYP) here but think it needs to cook for a few more days.  Will watch it closely this week.