“I’ve been bullish the dollar, but I think the bigger, long-term dollar rally is over,” said Marc Chandler, chief market strategist at Bannockburn Global Forex. “One reason is the policy mix in the U.S. has shifted. We had tighter monetary and looser fiscal policy. That’s good for a currency, and now we have the opposite. The interest rate differentials have been moving against the U.S. U.S. interest rates have been moving faster than everybody else’s.”

The Federal Reserve’s has shifted over the past six months, from a hawkish stance of raising interest rates, to neutral, and now to so dovish it is expected to cut interest rates next month. That has changed sentiment on the dollar, and strategists now see the potential for a longer term weakening of the currency.

The dollar also has been lagging. Since Tuesday afternoon, when the Fed was in the midst of its two-day meeting, the dollar index has lost 1.6%. But at the same time, gold futures for August in the past five sessions have gained 5.6% and gold has broken through a key area of resistance. Analysts said bitcoin was also benefitting from the weak dollar, and it was up 2% Monday.

“There’s a a lot more interest in gold on a widespread basis. It’s not just tactical investors or ETF holders. it’s broad based,” said Suki Cooper, precious metals analyst at Standard Chartered Bank. “If we look at ETF flows, Friday we had the largest inflow since 2016.” 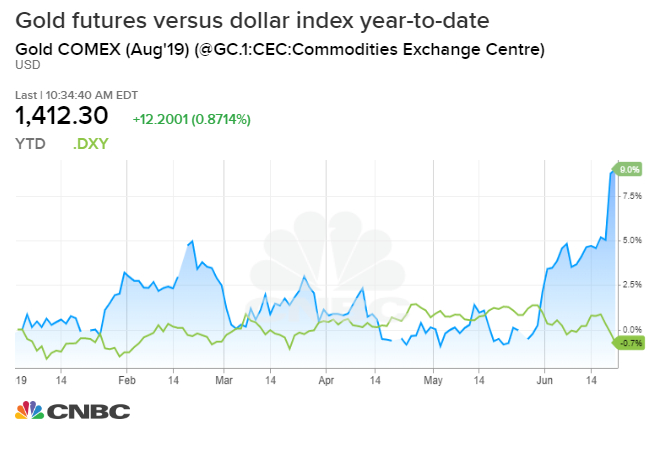 Buying of gold by global central banks has also been a factor driving the price higher, Cooper said. She said the first real boost for gold came when President Donald Trump was threatening a tariffs on Mexico as well as China, and investors feared a global recession.

Gold broke above the $1,360/$1,365 area last week, and now with a weak dollar, it has another catalyst. Strategists also said the tensions around Iran were driving investors into the safety of gold. 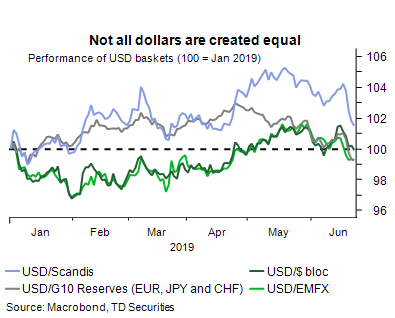 “If you think about the gold/dollar relationship, it’s one of the first things people in the market look at as a cleaner version of the anti-dollar trade,” said Mark McCormick, North American foreign exchange strategist at TD Securities. He said other anti-dollar trades would be the euro, yen, sterling and the CNH, the offshore Chinese Yuan. “They all kind of have dirt on their faces. None of them are clean anti-dollar trades.”

Both sterling and euro have issues with slow growth but also Brexit, which is still unresolved with no plan for the U.K. to leave the European Union, three years after the referendum.

Chandler said the dollar’s change in course could be significant, and gold move with it, reaching $1,700 per ounce. He said the current dollar rally started late in the Obama administration and as Trump was heading to the White House.

He said the dollar is ending a significant bull run, which follows the one in the late 1990s when the Clinton administration promoted a strong dollar policy, and the one before that, during the Reagan era, when the Fed Chair Paul Volcker had raised interest rates sharply.

Some traders noted the move in bitcoin could be viewed as an ‘anti-dollar’ trade of sorts.

“I guess you could call bitcoin almost gold-on-steroids. It’s got some of the same characteristics. It’s not a fiat currency. It’s got its own rhythms and moves too. It doesn’t have a central bank,” said McCormick.

Bitcoin rose above $11,000 this past weekend and was higher Monday, and has been moving parallel to the decline in the dollar.

“Bitcoin is negatively correlated to USD right now. So it is benefiting from the weaker dollar trade,” notes Tom Lee, head of research and co-founder of Fundstrat Global. “I think bitcoin is regaining some legitimacy from macro and fx traders as it has staged a recovery to levels that prove ‘bitcoin is not dead.'”

McCormick said he too sees the tide turning for the U.S. dollar, and he sees an end for now for the “MAGA” trade, a play on the Trump campaign slogan, “Making America Great Again.”

“I do think we’re at a turning point,” said McCormick. The dollar had been benefiting last year from the affects of fiscal stimulus; the Fed continuing to raise interest rates and the trade war, as investors sought safety.

“The ingredients were there,” he said. “But it’s not the reversal of the fundamentals that were bearish for the dollar. What you have right now which is clearly a big game changer, is the U.S. no longer has this growth dividend.”

Events in the next couple of days could be a big factor for both the dollar and gold. Cooper said the G-20 meeting in Osaka could reinforce or change the view that the Fed will cut interest rates.

“With respect to G-20. We think it’s going to be something that’s a factor in rate cuts. We’re expecting the Fed to cut in July. If we start to see a positive outcome, that could affect the outlook for a rate cut,” said Cooper.