Kevin McElroy:  In yesterday’s issue, I published a conversation I had with an anonymous copper fabricator executive. He played his cards understandably close to his vest, but he did raise an issue that I believe deserves further inspection.

I’m talking about the issue of speculation, and how it affects commodity prices. It’s a hot-button issue right now with oil prices (NYSE:USO) especially. President Obama recently directed the Justice Department to investigate “cases of fraud or manipulation” tied to speculators.

Here’s what the copper (NASDAQ:CU) company executive had to say on the topic:

“Back at the mine and refinery it costs roughly a dollar a pound to get copper out of the ground and refine it. We pay $4.22/lb per Comex. Someone is making some money.

So the cost fundamentals do not support such a high selling price. Speculators, hedge funds and ETFs all drive up the cost without adding any real value. Demand of course, especially from China has been a more fundamental driver.

Thus our business is hurt from the run up in copper price, there is really no positive at all.

So I am very biased, of course it’s perfectly legal to speculate but it always hurts our business when the gap between the fundamental cost to produce and the price are so artificially out of whack.”

My belief as a researcher and an analyst is that undue speculation in not just the copper market – but nearly every market, including the stock market, currency markets, the bond market, etc. – my belief is that this speculation is being fueled predominately if not completely by the actions of the Federal Reserve.

The Fed has a mandate, for better or worse, constitutionally or unconstitutionally, to maximize employment and keep GDP growth slow and steady. And now we’re seeing the breadth of their power to implement those two goals – they can simply transfer “dollars” from out of thin air into the bond market, into the financial system, into the mortgage market. Those dollars have to go somewhere. Goldman Sachs (NYSE:GS) isn’t likely to sit on billions of dollars – they’ll put it to work speculating. The same is true of all of the Fed’s member banks.

As we saw with the oil markets between 2008 and 2010, when the bets turn against the speculators, the price tends to drop to ridiculous lows. Looking at a copper chart, the same thing happened there too. 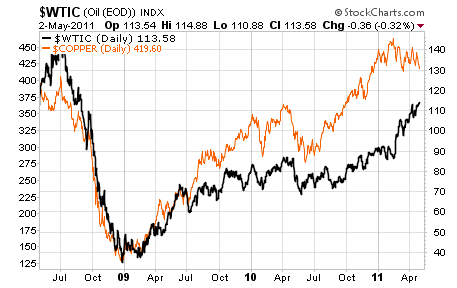 I think we’ll see these same types of booms and busts play out over and over again until the dollar is put permanently into the dustbin and the Federal Reserve building gets turned into another Washington DC museum. Maybe a money museum – to exhibit the folly of paper money systems throughout the ages. That’s actually a half-decent idea…

Anyway, this kind of speculation is the inevitable product of a fiat money system controlled by politicians who are in cahoots with the biggest financial institutions. It’s especially the case when, as we’ve seen, those same financial institutions have the tacit backing of the Federal Government in the event that their speculations go against them. Why wouldn’t they speculate? They win big until they lose and are bailed out.

In fact, they have an additional incentive to make bets in such a way that if they go against them, they will lose big.

That’s because no one ever got a bailout for a small loss. Only humongous, market shaking, headline grabbing losses become socialized.

The system is so bizarrely contrived at this point to reward bad behavior and punish good behavior that investors are forced to abandon any rational model for asset allocation.

For instance, I know for a fact that most investors would be happy to split their portfolios between blue chip dividend paying companies and triple-A rated corporate and government bonds. I know I would.

But with the world’s reserve currency on the fritz, buying those typically ‘safe’ assets might not be so safe – there’s no way to tell because we can’t even trust a triple-A rating anymore.

As I said, these types of booms and busts are in the cards until the Fed goes away and takes the dollar with it.

In the meantime, you know I’ll be buying gold (NYSE:GLD) and silver (NYSE:GLD).

Kevin McElroy is a top rated commodity researcher and analyst specialist at Wyatt Investment Research, with a targeted focus on short and long term investment opportunities.  He has worked in the investment publishing field for over three years alongside some of the world’s leading commodity traders and analysts.  He takes the complex futures and options trading strategies from the floors of the Nymex and the CBOT, uniquely combines them with economic trends and positions his recommendations in a way that any investor, from a straight long-term buy and hold investor to a sophisticated day trader can easily understand, implement, and profit.