Silver (SLV) started off the week with a bang, with a 6% return out of the gate, well ahead of the 1% gain from gold (GLD). This spike higher in the metal finally saw some capitulation type buying in the metal, with bullish sentiment finished at 95% bulls for two days in a row. These are extreme readings that we rarely see among any asset classes, and this spike in bullish sentiment pushed the long-term sentiment moving average above the dangerous 80% level. While silver has pulled back 2.5% from its highs as of this morning, I don’t see any reason to rush in and buy the dip right away. The reason for this is that parabolic uptrends like the one silver just experience rarely end with ordinary or shallow pullbacks. Instead, they bottom out when the trapped bulls begin to feel sick and puke up their positions, and when sentiment flips from exuberance to back in the gutter. While silver remains in an uptrend and dips are buyable, I would be waiting for a decline of 10% minimum from the highs before doing any nibbling.

Looking at the below chart which displays bullish sentiment for silver; there’s no arguing that things are incredibly frothy here short-term. Bullish sentiment finished Tuesday and Wednesday at a level of 95% bulls, and this is the highest reading for any asset class on two consecutive days in the past two years using Daily Sentiment Index Data. Essentially, this reading of 95% bulls is saying that there 19 bulls for every 1 bear surveyed the past two trading days – a sign that just about everyone is in the bull camp. The problem with everyone being bullish from a contrarian standpoint is that there’s no one left to buy short-term. Only when the market can flip a good chunk of these bulls into bears or neutrals can the market reset itself and generate new buying interest. The past three times that silver hit these levels of bullish sentiment, the metal corrected 10% or more over the next three months. In the 2016 run for silver, the market topped right at these sentiment levels and never came back. While the latter scenario of a 2016 long-term top is unlikely, I prefer to book profits on the 20% chance that this is what happens.

There are never any guarantees in the market. 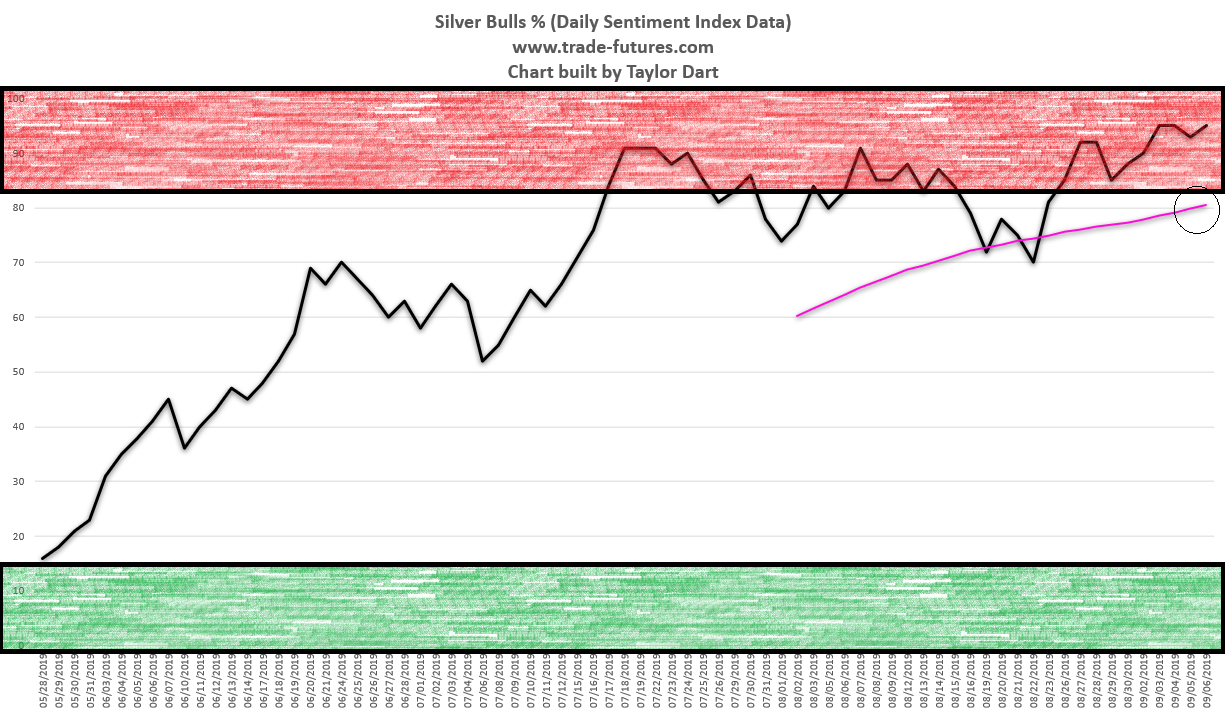 Moving over to silver’s weekly stochastics, we can see that things are just as frothy from a technical level. Silver has headed above 90% on its weekly 18-period stochastic only three times the past five years, and all occasions led to 15% or larger drops. In addition,  the upside was capped to 5% maximum over the next three months once it reached these levels. Based on this, the reward to risk is very poor at current levels for starting new silver positions above $19.00/oz. Instead, investors would be wise to wait for $17.70/oz or lower before considering doing any new buying. 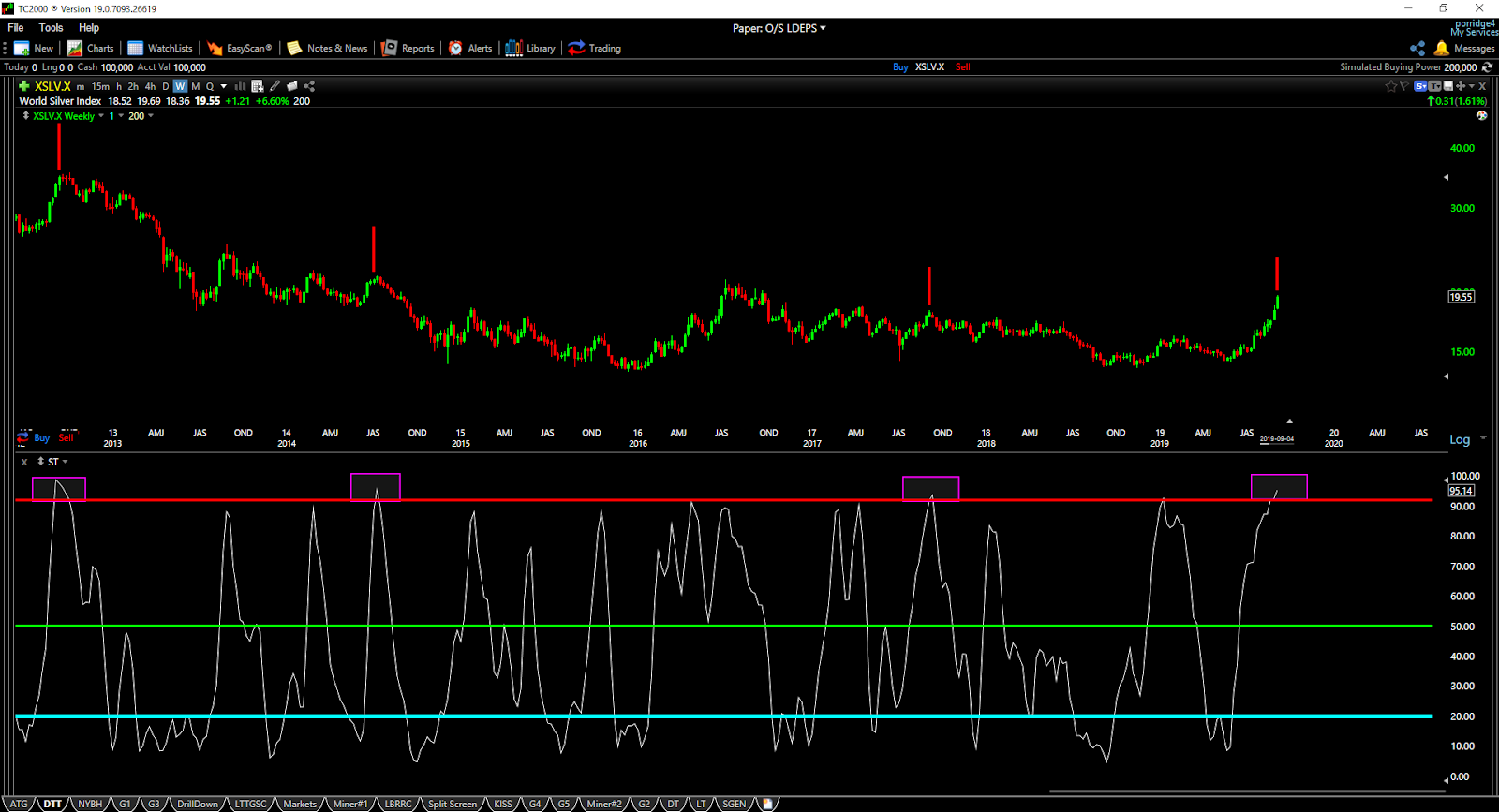 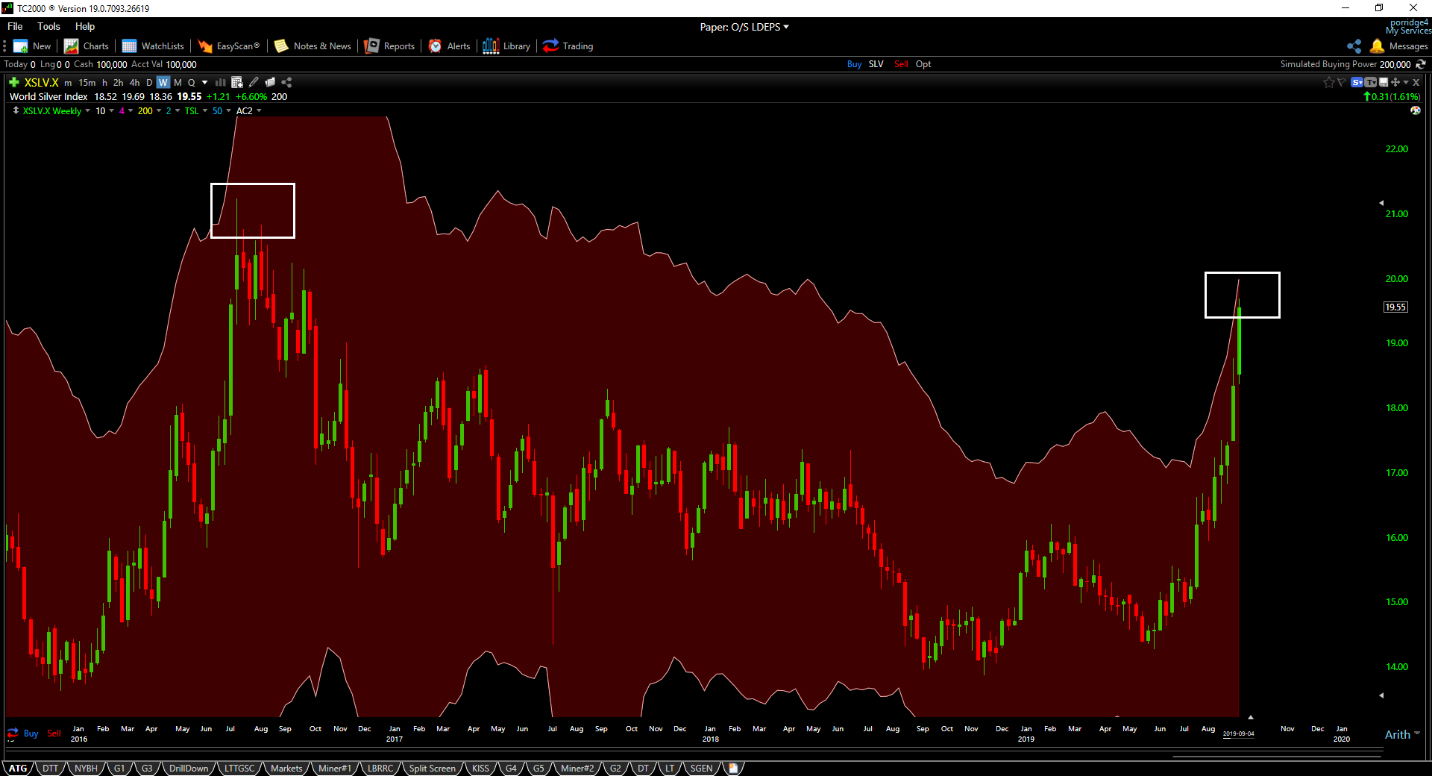 Finally, from an acceleration band standpoint, silver is reaching the same levels it hit at the top of the 2016 rally. In the 2016 period, silver went sideways for four weeks and then fell apart, plunging 25% in less than three months. While markets do not repeat, they do often rhyme, and I would expect at least a 10% correction from the $19.60 high based on this. This would put silver at $17.70/oz at some point before the end of November.

So how does the chart look before today’s early morning reversal? 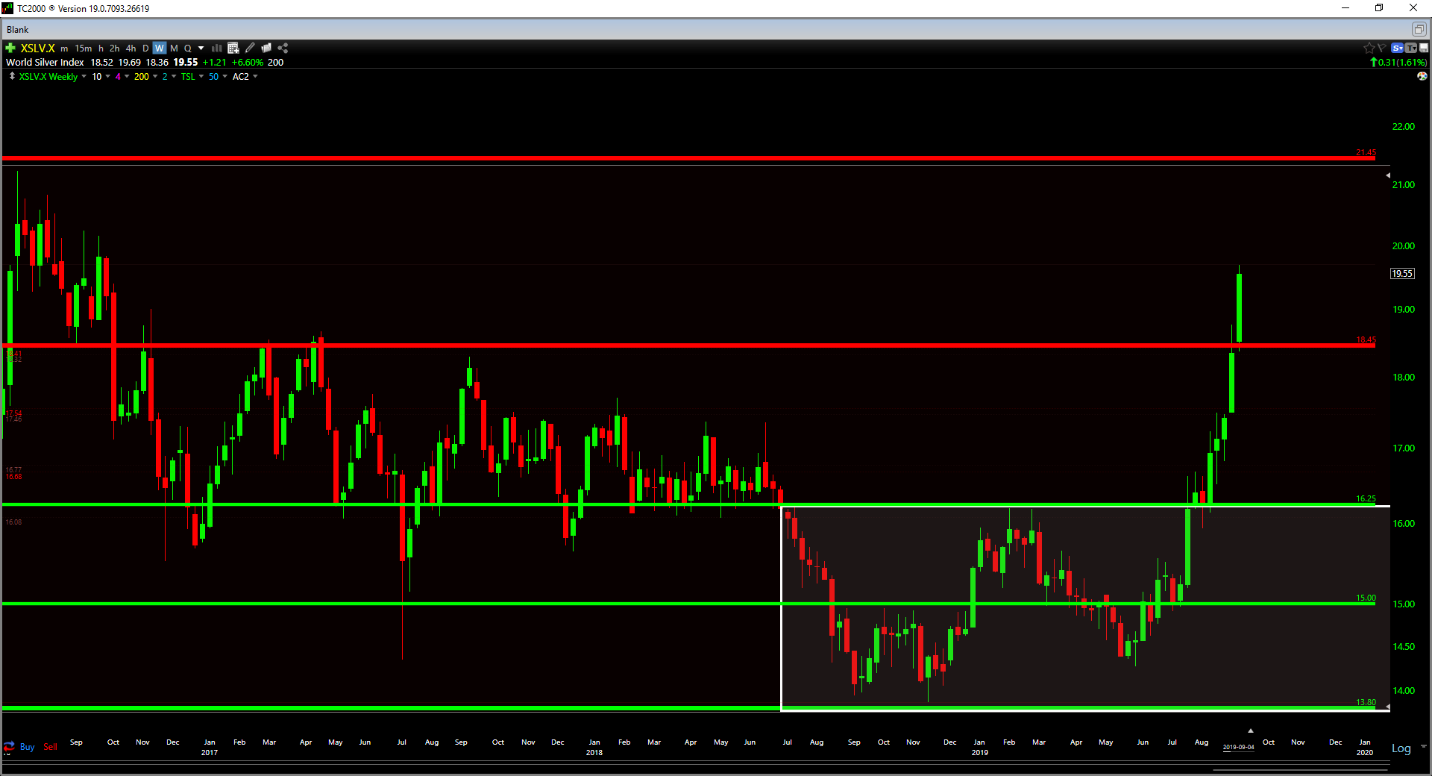 Silver briefly traded above crucial resistance at $18.45/oz and will require a close above $18.50/oz to take away this weekly resistance level. Critical support sits below at $16.25/oz, with some minor support at $17.50/oz. If the bulls can get through $18.50/oz on a weekly close, I would be optimistic that a dip to $17.50/oz might mark the lows. However, if it reverses at this $18.45/oz level and closes below it on Friday, there is a possibility that we re-test the prior breakout level near $16.25/oz.

To summarize, I see no reason to rush in and buy silver or silver miners here as today is only the first day of the reversal at the pivotal $18.45/oz level resistance. One day is not long enough to wash out bullish sentiment, and I would be surprised if we did not see sub $17.70/oz on silver before this correction is over. I plan to do some buying and silver and silver miners when the time is right, but I don’t think we’re there yet. For now, I see being patient as the best course of action. Silver may be in a bull market, but corrections are possible within bull markets, and they rarely end in one day. Those who are patient will be able to pick up the scraps once those that chased this bull puke up their positions. This is what I am waiting for.