Corey Rosenbloom: Is it possible that United States Steel Corporation (NYSE:X) is finally catching a bid from a breakout (and reversal pattern) from a long-term resistance level?

Could this be the start of a new long-term uptrend in price?

Let’s take a look at the Weekly and Monthly Chart to give us some clues for a longer-term play. 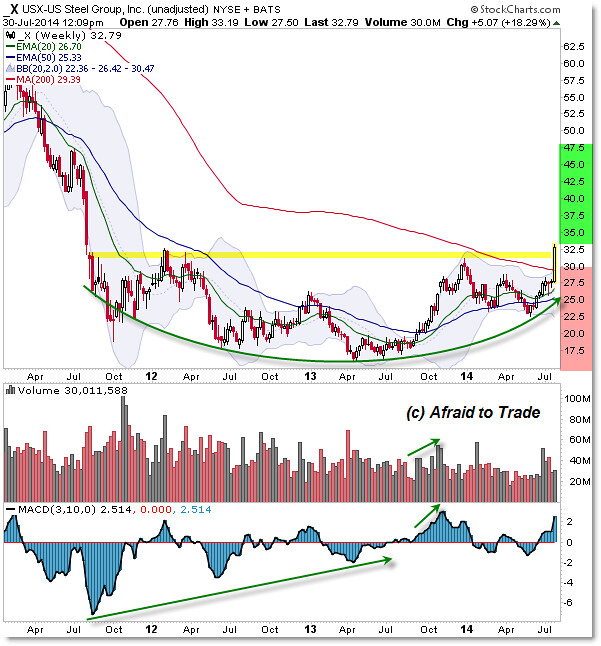 First, let’s start with the long-term “Rounded Reversal” or Saucer Reversal pattern that has developed since mid-2011 to present (mid-2014).

Note the lengthy (multi-year) positive momentum divergence into the April 2013 low near $16.00 per share.

On the swing up (and doubling in price) toward $30.00 per share, we saw volume and momentum surge with price (which is bullish).

So far, 2014 treated traders to a sideways consolidation, but buyers broke price above the $30.00 per share level and then the more important $32.50 level which is not only a multi-year resistance ceiling, but moving average resistance on multiple timeframes (including the 200 week SMA at $29.39).

The suggestion is that buyers can trigger a trend reversal via a breakout as price trades through “Open Air” above $33.00 per share.