It’s been a grueling month thus far for metals investors, with more losses stacking up, and the metals erasing all of October’s recovery. As discussed previously, there was a decent chance that silver (SLV) would re-test or break September’s lows near $16.90/oz, as bullish sentiment remained elevated despite the decline. While I was hoping for some capitulation in sentiment on the drop below $16.90/oz this week, we didn’t see any real fear. Bullish sentiment fell to 51%, but still a reading where the bulls are outweighing the bears marginally. Based on this, the potential for another low remains before the correction is over.

We finally got what we wanted in silver this week, which was a violent drop below the $16.90/oz low on the metal from September 30th. These undercuts are often enough to shake out weak hands and generally make some of the bulls rethink their long positions. Unfortunately, this drop in silver did not elicit any fear from the bull camp, with a higher reading in bullish sentiment despite a lower low in price. The September 30th drop saw bullish sentiment on silver fall to 49%, while the recent low saw it touch 51%. This suggests that speculators are getting more bullish despite lower prices, and this has weakened the thesis for starting a position. 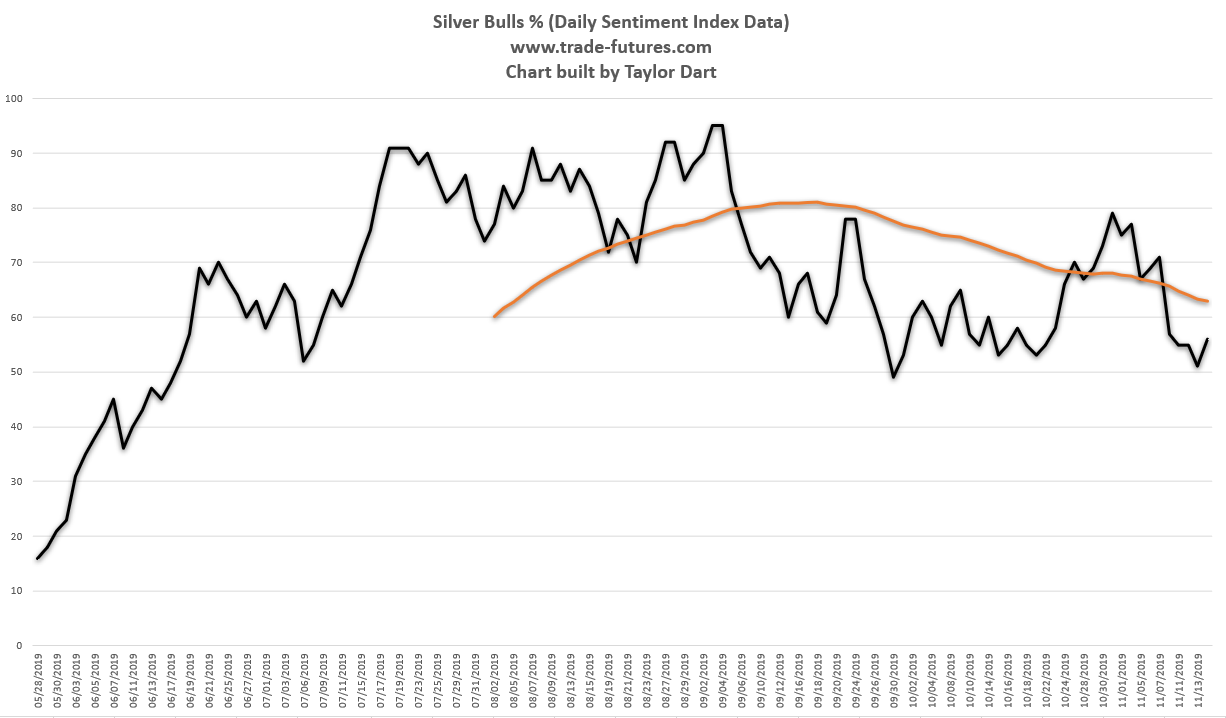 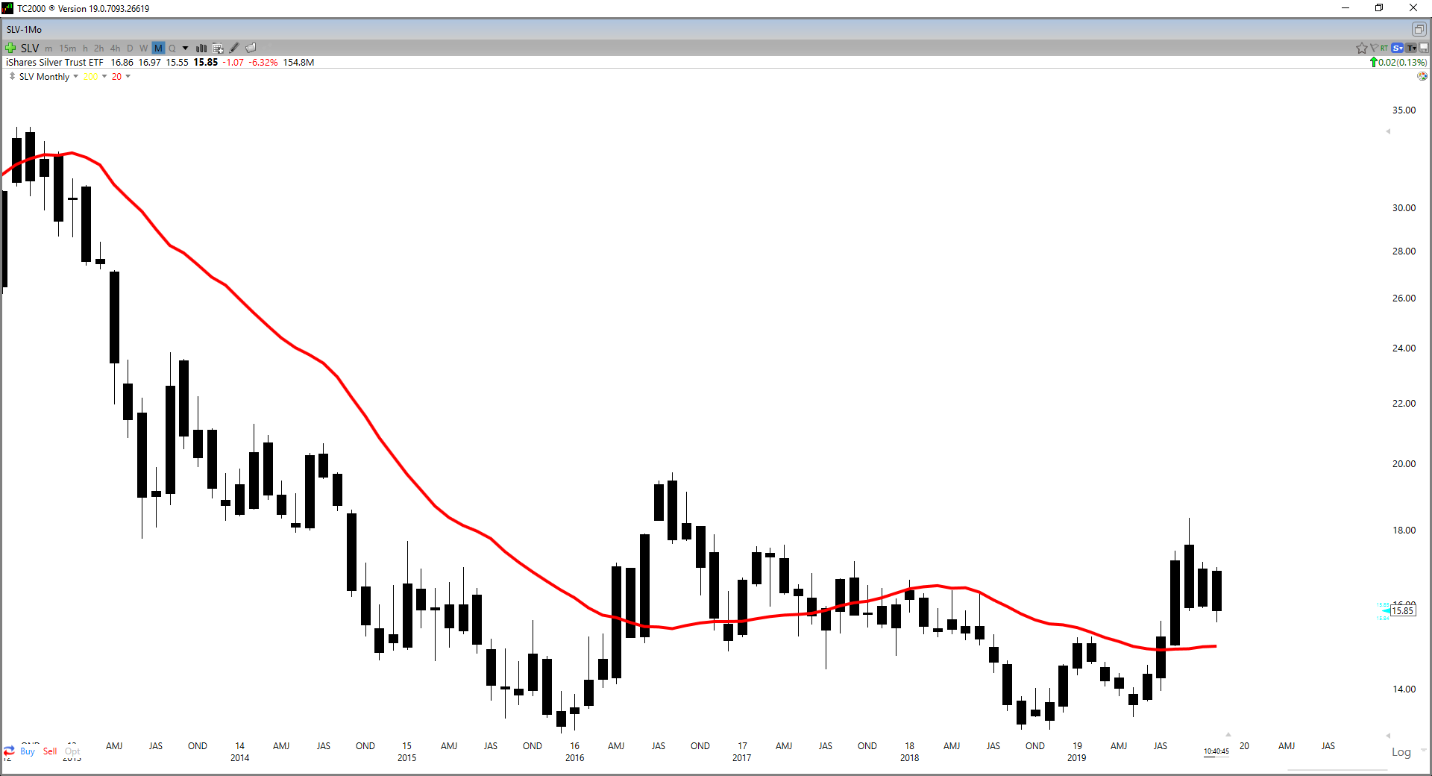 Fortunately for the bulls, the good news is that the bigger picture remains bullish, despite the complicated short-term picture. The Silver ETF remains above its 20-month moving average (red line), and this moving average is beginning to curl up as of this month. Once this moving average is reclaimed, it typically acts as support on any pullbacks. This area coincides with the $15.00 level on SLV and would be a low-risk area to establish a position. However, at current levels with the bounce we’ve seen since Monday, I still don’t see a low-risk entry for silver. This doesn’t mean the metal can’t rally or that there’s no chance it has bottomed, it just means that the trade setup is much more muddled than the gold setup. Gold (GLD) also dropped below its prior low this week but triggered short-term buy signals, and I have started a new position there at $1,451/oz.

Zooming in to a daily chart for silver, we’ve got a wide range with support below at $15.30 for SLV, with the rising 20-month moving average also converging near this area. This is the ideal buy spot for the metal, where investors can be confident they have a high-probability setup. However, where we sit a little shy of $16.00 currently on SLV, there is no real A+ setup, in my opinion. 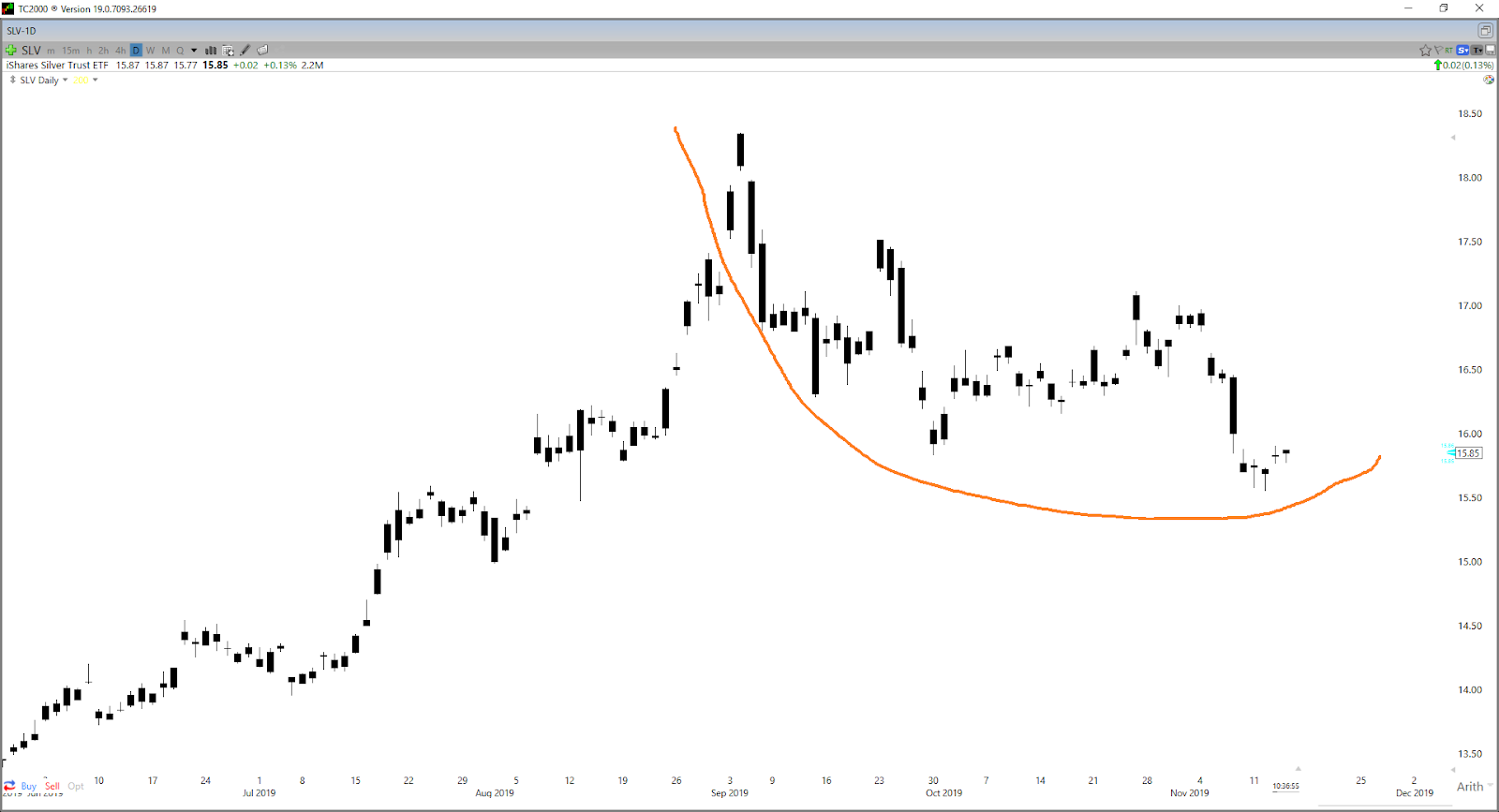 Any rallies that cannot get through $17.50 on SLV are likely just noise, and just oversold bounces within an intermediate downtrend. For this reason, I would be inclined to take profits on SLV at $17.00 or higher if I had bought the dip. While I am more confident that we are near a bottom in gold, silver is the weaker metal but has a much higher bull following. For this reason, I see the silver trade as inferior to gold at this time and will remain of this opinion unless we can break $16.40/oz on silver, or $15.30 on SLV. Silver continues to build a bowl-shaped base, and declines outside of this bowl would be the best buying opportunity as this would likely flush out the final weak hands for a reliable bottom.