“The stockpile of silver bars for the iShares Silver Trust ETF (NYSE:SLV) increased by an astonishing 352 tonnes yesterday – the biggest single-day addition since the fund was launched back in early-2006, save for the odd Dec. 31st, 2007/Jan. 1st, 2008 sequence during which 617 tonnes were added and then 555 tonnes removed the next day,” Tim Iacono Reports From Seeking Alpha. 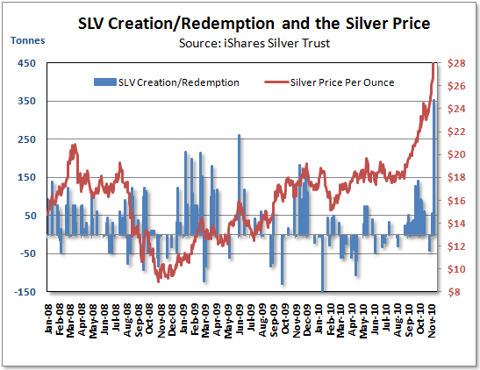 “Some 580 tonnes have been added to the trust in just the last four trading days, bringing the total inventory to 10,718 tonnes, up almost 20 percent since August when metal prices took off. Of course, the price of silver has risen by more than 50 percent since that time, so, don’t be surprised if metal continues to be added to the trust,” Iacono Writes.

Take a look at our category on the ETF for more in-depth articles below: