This is the situation we’ve been seeing with respect to the persistent rally in the market and how we study (and adapt to) what has changed. 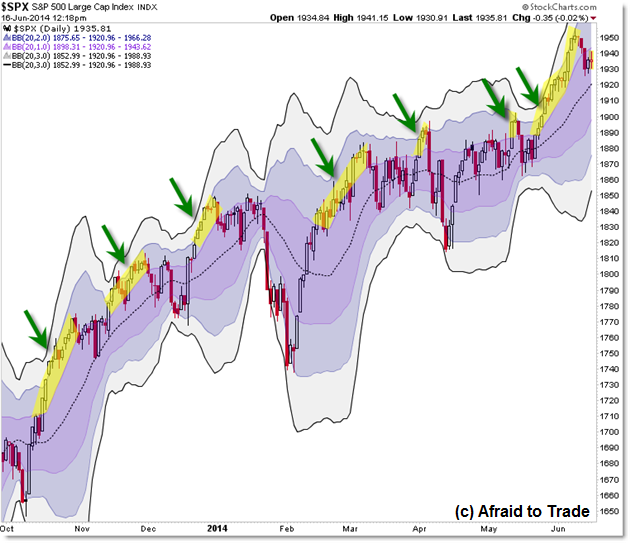 I’ve been highlighting this concept to members of the Daily Reports – it’s the tendency for the market to “become overbought and stay overbought.”

It’s a recent phenomenon and it’s one that we need to update into our trading plans.  We can’t use the same strategies (or assumptions) of the past to the current market which has changed.

It’s relatively rare – historically – to see a market break and extend multiple days into the upper Bollinger Band (two standard deviations away from the 20 day average).

However, as we can see in the chart above, this ‘rare’ behavior is now common in the market.

Of course, after multiple days trading against the upper Bollinger Band, price did pull-back or retrace to the lower Bollinger Band in all cases except for the October 2013 extension (which only pulled back to the rising 20 day SMA – dotted line).

Be sure to compare the current “over-extension” to that of the October and November 2013 period where the expected or logical outcome – a pullback/retracement to the lower Bollinger Band – did not occur.

For reference, the current lower Bollinger Band potential target is rising through the 1,880 index level and the 20 SMA midpoint target near 1,920 was almost achieved with last week’s pullback.

Reference the yellow highlighted areas and make note of this new environment where a poke through the upper Bollinger Band has led to additional upside action instead of the logical pullback from an ‘overbought’ level.