Despite the recent price surge in crude oil this week, basically going from $81.50 to $87 a barrel within this week–thanks to a Fed’s QE2-induced weak dollar– oil inventories actually added another 2 million barrels build to the current stockpiles.

These are the highest inventory levels for Crude in 2010 and are just shy of the 370 million mark, which will be punctuated next week with another build in crude stockpiles. (See Stocks Chart from the U.S. EIA) 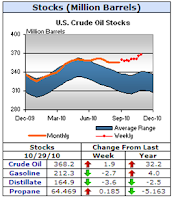 Oil imports fell to 8.6 million barrels per day from the prior week’s 9.5 million (See Chart).  So we even had a build with lower imports, and this trend will not continue as even before the recent price spike, OPEC members were producing beyond quotas (OPEC average compliance rate was at 61 percent in Oct.)

With elevated oil prices and the need for revenue in these challenging times for countries struggling with increasing debt burdens, expect the over producing to only get worse.  .

Another factor that is eventually going to put downward pressure on crude oil prices is that at $87 a barrel, any oil that was being stored in container ships is going to be dumped on the market at these elevated prices. Not to mention the fact that non OPEC countries will be producing as much oil as they possibly can with these higher price levels.

Then, there’s the reduced refinery utilization rate .  U.S. refineries cut utilization rates to 81.8 percent, the lowest since March, as refiners try lower swollen inventory levels in the products market. We are also in the middle of the refinery turnaround season, which would further reduce the run rate.

Moreover, we are currently in the slower part of the demand side for crude oil products, the summer driving season is over, and historically, this is the weak part of the oil market from a calendar perspective, this is just in the U.S.

If we take a look at China and India, they will be using less oil as well since both are struggling with escalating inflation levels. Both countries have raised gasoline and diesel prices the past month, lowering the subsidies for these products, which will only hurt demand.

As China, India and other emerging countries are implementing fresh “quantitative tightening”, including raising interests rates, among other measures to rein in inflation, “hot money”, and partly to combat Fed’s QE2, growth is expected to drop for the next couple of quarters, and longer. That means the emerging markets are not going to be a factor in eating into these swollen inventory levels for the next couple of quarters either.

Evidently, we have a problem, and the problem is that we have more supply of crude oil in the market than demand, and this isn`t going to improve over the next couple of quarters, especially with higher prices which only incentivize more crude to come to the market, and dis- incentivize consumption or demand for oil and oil products.

This is economics 101, and evokes the old adage there is no cure for high prices like high prices. In other words, when you have rising levels of supply that is more than demand, prices have to come down, this is sound economic theory.

So expect crude oil to reverse some of these gains and trade back in the $75 to $85 rangeafter the initial hoopla surrounding Mr. Bernanke`s QE2 initiative wears off and reality starts to set in come physical delivery time at Cushing. 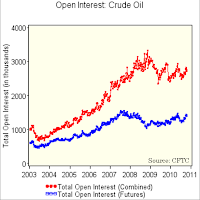 The December 2010 Crude Oil contract expires trading on the 19th of November, and in an over-saturated market with limited storage capacity, crude Oil is likely to go lower over the next couple of weeks due to the fact that nobody will want to take physical delivery at these prices.

And given the record number of historic longs (See CFTC Chart), the Commodity Futures Trading Commission (CFTC) report released on Friday shows cumulative net long positions at a record of 194,128. There were nearly 18,000 new net long positions against 2,551 new net short contract positions added in the week up to November 2.

These two factors of physical delivery and contract rollovers will be bearish for Crude Oil prices over the next couple of weeks.

Much Ado About Inventory, Credit & Housing

There is definitely an inflationary argument for higher crude prices (e.g. QE2) sometime in the future for the crude oil market, but not till inventories start going down, not when they are at record levels, and will only continue to build over the next couple of months based on the discussion so far.

The bottom line is demand has to improve considerably just to keep current supply levels at equilibrium, and this is just not going to occur in this economy with higher prices. The supply model was established at the peak of the credit bubble where you had a healthy housing market, healthy state and local budget revenue streams, and a robust credit market where small businesses, entrepreneurs, and individuals could easily attain credit.

The private contraction in the credit markets from the 2007 highs is still a major drag on the economy, and will not return to those levels for some time. So don`t expect crude oil demand to really start picking up steam till the housing market starts recovering, maybe by March 2011 is when both markets will start showing some improved demand fundamentals.

Crude, unlike gold and silver, which do not have weekly transparent inventory reports, and has much higher storage costs and capacity issues, actually has to adhere to the economics of supply and demand, and despite future inflation concerns, in the near term prices must go down due to swollen supply in the market.

Otherwise, we literally will be swimming in crude oil.

About: Economic Forecasts & Opinions The theory of quantum mechanics and Einstein’s theory of relativity (E=mc2) have taught us that matter (yin) and energy (yang) are inter-related and interdependent. This interconnectedness of all things is the essence of the concept “yin-yang”, and Einstein’s fundamental equation: matter equals energy.  The same theories may be applied to equities and commodity markets. All things within the markets and macro-economy undergo constant change and transformation, and everything is interconnected.  That’s why here at Economic Forecasts & Opinions, we focus on identifying the fundamental theories of cause and effect in the markets to help you achieve a great continuum of portfolio yin-yang equilibrium.