The Hourly View for TRP

At the moment, TRP’s price is down $-0.03 (-0.07%) from the hour prior. It’s been a feast for bears operating on an hourly timeframe, as TRP has now gone down 8 of the past 10 hours. If you’re a trend trader, consider that the strongest clear trend on the hourly chart exists on the 100 hour timeframe. Price action traders may also wish to note that we see a doji candlestick pattern on TRP. Given that we see downtrend on the 10 and 5 hourly candle timeframe, and that such candlestick patterns often denote reversals, this may be worth noting. The moving averages on the hourly timeframe suggest a choppiness in price, as the are all in a mixed alignment — meaning the trend across timeframes is inconsistent, indicating a potential opportunity for rangebound traders.

At the moment, TRP’s price is down $-0.51 (-1.17%) from the day prior. The daily chart shows that TRP has seen 2 straight down days. If you’re a trend trader, consider that the strongest clear trend on the daily chart exists on the 100 day timeframe. Most noteworthy in the world of moving averages on the daily chart is that the 50 day moving average has been crossed, so that price is now turning below it. The moving averages on the daily timeframe suggest a bullishness in price, as the 20, 50, 100 and 200 are all in a bullish alignment — meaning the shorter durations are above the longer duration averages, implying a sound upward trend. Tc Energy Corp’s price action over the past 90 days can be seen via the chart below. 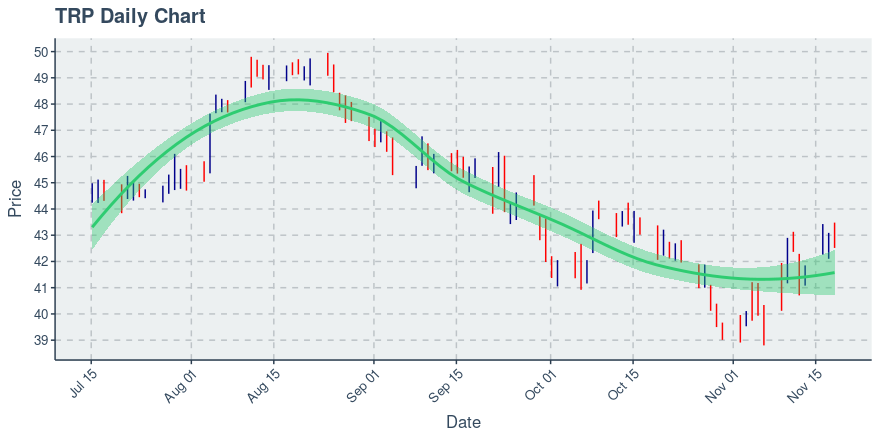 News traders keeping an eye on TRP may find value in this recent story:

Keystone XL Gets Indigenous Investment With Hopes to Woo Biden

(Bloomberg) — Keystone XL is receiving an investment from Canadian indigenous groups in a deal that TC Energy Corp. hopes will help save its embattled oil pipeline project from being scrapped by U.S. President-elect Joe Biden.Natural Law Energy, a group of five first nations in Alberta and Saskatchewan, will make an equity investment of as much as C$1 billion ($765 million) in the project, Calgary-based TC Energy said Tuesday. The company is close to striking deals with other indigenous communities in both the U.S. and Canada, Bevin Wirzba, TC’s president of liquids pipelines, said in an investor presentation.Alberta, a landlocked province holding the world’s third-largest crude reserves, desperately needs more pipelines to export crude from its oil sands. Keystone XL is among the many pipeline projects in North America that have suffered growing opposition from environmental and indigenous groups.The conduit, which was rejected by the Obama administration and revived by President Donald Trump, needs a permit from the U.S. government because it crosses the border with Canada. Biden’s campaign has said he would rescind the permit granted by Trump.Partnerships with indigenous communities, which often spearhead opposition to oil pipelines, is one of several strategies that TC Energy hopes will make the project more palatable to the incoming administration in the U.S., according to Wirzba.TC Energy has also signed agreements with labor unions, making the project 100% union built, and set up a “green training fund” to help union workers transition to green economy jobs. Already, 200 kilometers of the pipeline has been constructed since work started this year, including a section across the international border. About 3,000 people are working on the pipeline with more to be hired.Keystone XL has been controversial since first proposed more than a decade ago.Opponents argue it will stimulate oil sands development, contributing to climate change. Canada’s oil industry argues the project is needed to supply heavy crude to U.S. Gulf Coast refineries, who need the oil to replace declining volumes from Latin America.Work on Keystone XL began earlier this year after the government of Alberta invested $1.1 billion to jump-start construction and guaranteed $4.2 billion of loans. Alberta’s Premier Jason Kenney has said that starting work creates momentum that makes canceling the project difficult.In an emailed statement Tuesday, Kenney welcomed the agreement between TC Energy and Natural Law, saying it “serves as a model of how to build strong and trusted partnerships between industry and Indigenous groups for a safe, secure and prosperous energy future.”For more articles like this, please visit us at bloomberg.comSubscribe now to stay ahead with the most trusted business news source.©2020 Bloomberg L.P.

Why is the Stock Market Tanking Now?