What’s going on with natural gas prices? It’s one of the only (possibly the only) commodities to sell for cheaper than it was a year ago. 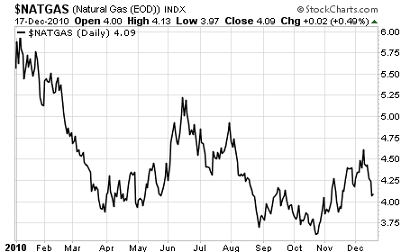 Today I’m going to discuss three main reasons why natural gas prices (in the United States) haven’t participated in the commodity boom of 2010.

The first reason is that natural gas prices are loosely tied to oil prices.

Yes, oil prices rose over the past year, but only by about 10%. In order for oil prices to significantly buoy natural gas prices, we’ll need to see another huge ramp up like we did in the summer of 2008. Those higher oil prices (above the $100 mark – as an estimate) bolster demand for natural gas.

The more expensive oil gets, the more likely conventional and non-conventional producers are to boost production – which increases demand for natural gas.

Additionally, as oil becomes more expensive, energy consumers in industries that have the capability to switch between crude oil and natural gas will switch to natural gas. Again, that bolsters natural gas demand.

You might be thinking “isn’t crude oil much more energy intensive than natural gas? What’s the break-even point from a cost perspective?”

It’s pretty easy to figure out. Natural gas sells in blocks of one million British Thermal Units (mmbtu). Right now, it’s selling for about $4 per mmbtu. A barrel of oil costs about $88 and contains 5.8 mmbtu.

So, $4 currently buys one million btus worth of natural gas, but only 260,000 btus worth of oil. It’s easy to see why consumers would be willing to switch from crude oil to natural gas with even a marginal increase in the price of oil. There are other reasons why.

The second reason that natural gas hasn’t kept up with the gains in other commodity prices is that a variety of new production techniques have flooded the market with unprecedented amounts of supply. Horizontal drilling techniques, high-pressure fraccing and even massive discoveries in North Dakota, South Dakota, Wyoming, Pennsylvania, New York, Texas, Oklahoma and Louisiana (to name a few) mean that there’s no shortage of natural gas coming to market.

According to the US Energy Information Administration (a part of the Dept. of Energy) the United States currently has just about as much natural gas in underground storage as it’s ever had:

From the above chart you can see that underground natural gas supply acts in a very pronounced seasonable trend. Supply builds all spring, summer and autumn, and then gets drawn down by winter consumption as a heating fuel.

I think you can probably see where I’m going with this information, but I have one more big reason why natural gas has so far lagged the broader run-up in commodity prices.

So far, natural gas suffers from what I call the “telegraph” problem. It’s the same problem that telegraph companies had in the 1800s: the wondrous new telegraph technology that allowed people to communicate quickly over long distances was stymied by the Atlantic Ocean. That is, until 1866 when they were able to sink a cable from the United States to Newfoundland to Great Britain.

Today, there are no natural gas pipelines connecting natural gas thirsty Europe and Asia to the massive natural gas resources in the United States and Canada.

The only way to get American natural gas to consumers in Europe and Asia is to turn it into liquefied natural gas (LNG) and to transport it in tankers.

The problem right now is a shortage of facilities that can turn natural gas into LNG, and moreover there are also shortages of receiving facilities in Asia and Europe to actually get the LNG off of ships and make it available to consumers.

By my last count, there are only a dozen or so LNG terminals serving all of Asia, and only a handful serving Europe.

So what’s my point?

The point is that all three of these factors (oil prices, supply and LNG terminals) are in different stages of reversing course. Oil prices are certainly headed higher in the not-so-distant future.

Supply is already starting to dwindle.

And LNG terminals around the world are under construction which should severely undermine the telegraph problem.

I expect natural gas prices to double in the coming 18 months. Today, you can still buy many natural gas companies at very attractive valuations.

I’m researching this natural gas story nearly every day, so if you have any favorite ways to play the natural gas trend, please send them my way at [email protected]. I will be discussing my preferred methods for investing in natural gas in an upcoming issue of the Resource Prospector.

Written By Kevin McElroy From Wyatt Research  Disclosure: no positions

Kevin McElroy is a top rated commodity researcher and analyst specialist at Wyatt Investment Research, with a targeted focus on short and long term investment opportunities.  He has worked in the investment publishing field for over three years alongside some of the world’s leading commodity traders and analysts.  He takes the complex futures and options trading strategies from the floors of the Nymex and the CBOT, uniquely combines them with economic trends and positions his recommendations in a way that any investor, from a straight long-term buy and hold investor to a sophisticated day trader can easily understand, implement, and profit.