From Tom DiChristopher : Energy stocks are on the cusp of falling into a bear market after a sudden escalation in the U.S.-China trade dispute dragged the stock market lower on Tuesday. 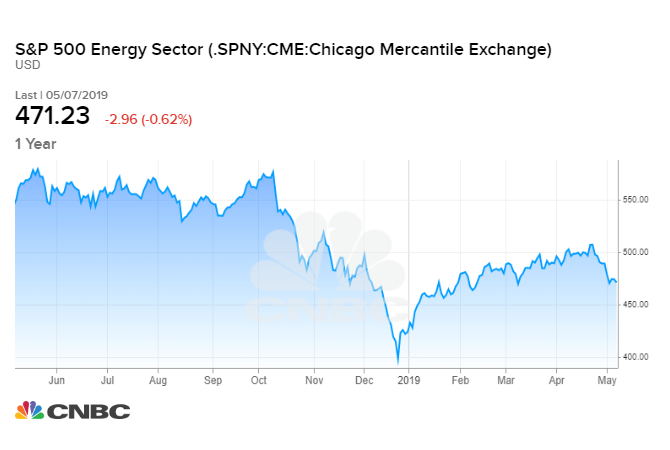 Tuesday’s slump highlights the energy sector’s continued struggle to break out amid uncertainty around future oil prices and global demand for crude. The energy sector is up 11% this year, outperforming utilities, materials and health care but trailing high fliers like technology and consumer discretionary stocks by a wide margin.

President Donald Trump this week threatened to raise tariffs on Chinese goods on Friday. The move came after China backtracked on virtually all of the major parts of a trade pact being negotiated with Washington, Reuters reported on Wednesday.

The prospect that the world’s two largest economies will not resolve their trade dispute is a particular concern for the energy space. Higher tariffs are seen weighing on global economic growth, which could dent demand for energy supplies like oil and natural gas.

The trade tension exacerbates the uncertainty that has plagued the oil market since an historic price crash in 2014.

Wild oil prices swings last year kept many investors on the sidelines. The volatility made it difficult to predict the fortunes of oil companies, so the energy sector remained stuck in a game of wait-and-see.

The path of oil prices became more certain this year, with benchmark crude oil futures rallying more than 40%. But the rally has faltered as the U.S.-China trade dispute threatens to derail global growth and traders brace themselves for higher output from Saudi Arabia and OPEC.

XLE currently has an ETF Daily News SMART Grade of A (Strong Buy), and is ranked #1 of 38 ETFs in the Energy Equities ETFs category.