Michael Snyder: What the Republican Party has done to fiscal conservatives over the past year and a half has been a betrayal so vast that it is difficult to find words to describe it.  Back in 2010, the Tea Party was riding high and a flood of new Republicans was sent to the U.S. House of Representatives in one of the greatest landslides in U.S. political history.  On election night 2010, more House seats changed hands than in another other election since 1948.  It was the greatest defeat for any sitting president in a midterm election since 1938.  After the election, the Democrats were left with fewer House seats than at any other time since 1946.  Needless to say, it was an absolutely historic election.  The Tea Party completely dominated American politics that night, and they sent the Republican Party a clear message that they wanted government debt to be brought under control.  So what has changed since then?  Not much.  The U.S. government is still running trillion dollar deficits every single year.  I have previously spent a lot of time blaming Barack Obama and the Democrats for this, but the truth is that they could not have spent a single penny without the approval of the U.S. House of Representatives.  So the Republican Party is complicit in this crime against the American people.  If there was ever a mandate to take a stand against runaway government debt, it was after the 2010 election, and the Republican Party has failed miserably.  So what are fiscal conservatives supposed to do now?

As CNS News recently pointed out, the U.S. national debt has increased by approximately 1.6 trillion dollars over the past 15 months.  This Congress has added more to the national debt than the first 97 Congresses combined….

When Boehner became speaker on Jan. 5, 2011, the federal government was operating under a continuing resolution that had been passed on Dec. 21, 2010 by a lame-duck Congress. That CR expired on March 4, 2011.

On March 1, 2011, Boehner agreed to a new short-term spending deal with President Barack Obama and Democratic congressional leaders to keep the government running past the March 4, 2011 expiration of the old CR. Since March 4, 2011, federal expenditures have been carried out under a series of CRs approved by both the Republican-controlled House and the Democrat-controlled Senate and signed into law by President Obama.

We should expect Democrats to act like this.  They don’t seem to even care that they are plunging our nation into financial oblivion.

But Republicans are always giving speeches about how bad the national debt is.  They are endlessly promising us that they are going to stand up to Barack Obama.

Sadly, they never seem to deliver.

Most Republican politicians seem to have absolutely no backbone.

If the Republicans had wanted to stop these trillion dollar deficits they could have done it.

They could have said no to anything but a balanced budget.

So why are we still running trillion dollar deficits?

Why does our national debt chart still look like this?…. 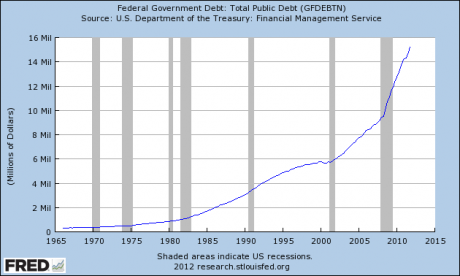 The Republican Party is a poor excuse for a political party at this point.

They can’t even stand up for the most basic things that the party is supposed to stand for.

If they are not going to work for us, then why should any of us ever work for them?

The U.S. national debt is not some small issue.

It is the greatest debt in the history of the world and it threatens to destroy the future for all Americans.

Right now, the United States already has more government debt per capita than Greece, Portugal, Italy, Ireland or Spain does.  How much worse does it have to get before we all start screaming at the top of our lungs?

When Ronald Reagan was elected, the U.S. national debt was less than a trillion dollars.

Now it is almost 16 trillion dollars.

And the Republican Party had control of the White House most of the time that debt was being run up.

Shame on the Republican Party!  Most of them are just a bunch of watered-down Democrats when it comes to fiscal issues.

Sadly, the American people are not even being told how bad things really are.  If the federal government used GAAP accounting standards, the real federal budget deficit for last year would have been 5 trillion dollars instead of 1.3 trillion dollars.

A recent USA Today article explained how this number was arrived at….

The big difference between the official deficit and standard accounting: Congress exempts itself from including the cost of promised retirement benefits. Yet companies, states and local governments must include retirement commitments in financial statements, as required by federal law and private boards that set accounting rules.

Yes, we should definitely blame the Democrats for this.  The Democrats are absolutely horrible.

But where are the Republicans?

They could have blocked all of this if they wanted to.

Right now, the federal government is stealing approximately 150 million dollars an hour from our children and our grandchildren.

Just think about that for a while.

By the end of this hour, the federal government will steal 150 million dollars from future generations.

Then they will do that again next hour.

And the hour after that.

And the hour after that.

The Republicans could stop this nightmare but they refuse.

And you know what?

If Mitt Romney is elected he is not going to stop it either.

According to a recent article in the Washington Times, Romney admitted that he has absolutely no plans to balance the federal budget in his first year during a recent campaign stop….

“My job is to get America back on track to have a balanced budget. Now I’m not going to cut $1 trillion in the first year”

So why aren’t fiscal conservatives howling in outrage?

It is because they are so scared of another term for Obama that they are willing to go along with just about anything.

They are even willing to vote for Mitt Romney.

During that same campaign stop, Mitt Romney went on to explain why he does not plan to balance the budget….

“The reason,” he explained, “is taking a trillion dollars out of a $15 trillion economy would cause our economy to shrink [and] would put a lot of people out of work.”

And you know what?

Mitt Romney is right about that.

Sucking a trillion dollars out of the economy would make the economic statistics look absolutely horrible and would guarantee him a one way ticket out of the White House in 2016.

Our politicians don’t want to ever cut the budget significantly because it will hurt the economy and make them look bad.  If they look bad then there is a good chance that they will not be elected again.

So we continue to steamroll down the same path that Greece has gone.

In the end, our financial system will be absolutely destroyed.

Things did not have to turn out this way.

The Republican Party could have taken a stand.

But they didn’t.  The cowards in the Republican Party always gave in.

So now we all get to pay the price.

The greatest debt bubble in the history of the world is going to burst and America is going to be completely devastated.