Speaking of going long, it is important to recognize also from a psychological perspective that those who went long during the blow off bull run from February 2010 to April 2010 were quickly trapped after the May 6, 2010 flash crash.  Since then the market has rallied and each time those who were trapped have been trying to get out.  It has gotten to the point now in the trend were I think those longs who are still deeply underwater will desperately try to get out on ANY rally so they can walk away home free.  The problem is that if the rally does not come then they may have to unload all at once to get their money back.

I think people have not forgotten the 2008 decline.  Price has memory.  That is why I think this decline will be faster because people already know how quickly things evaporated back then.  If we decline badly again they will not want to make the same mistake of being slow again to take profits or recoup at least partial profits.  They will want to get out faster this time.

We already know that the very powerful cardinal climax aspects have initiated end of June and opened the window towards extreme price negativity.  Since the last part of June the market has declined in persistent fashion.

What is fascinating to me is that the current stance of the 2010 price chart is at almost the exact same point in time of the evolution of the 1987 pattern AND the phase of the moon is almost identical as well.

So if the correlation continues it could mean that we are about ready to engage on a relentless crash right down into the new moon solar eclipse of July 11th, 2010.  It is mind boggling to me how all these little pieces fit together.

To me this looks like the end game.  How low we actually go is the most difficult part to forecast and probably impossible.  If there is a true panic then how low is low?  I mentioned in previous posts 950 on the sp500 or an intraday slide to 900 and then close at 950 range.  This seems like a reasonable forecast.  But panic is not reasonable.

So the guide for me will once again be the 14 day RSI.  As indicated previously the power zone is below the 30 range.  If I am correct on this mega plunge this week then the depths of the crash low should be somewhere between the 10 to 25 RSI level. 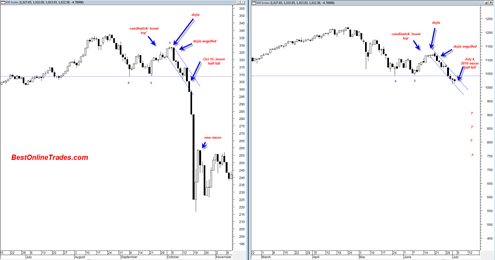 So it appears this is the end game.  God Help us all.  It is never the end of the world.   But if we do get a really large drop I can only imagine the havoc that will be created in Washington and world wide.  I suspect a lot of people will be very angry and with good reason.

But the problem is that markets do this kind of thing all the time on the 5, 10, and 15 minute charts.  It is very rare to see it on the daily charts.  Nothing goes straight up and nothing goes straight down.  Despite the attempts of the current administration to prevent a ‘financial crisis from ever happening again’ they will happen time and time again.  It is just a natural occurrence and with each crash and financial panic comes a ‘cleansing’ of sorts and the beginning of the seeds of healing and new economic progress down the road.  The more governments try to manipulate the economy the worse the eventual correction becomes.