From Jeb Handwerger: Many investors have been attracted to the Market Vectors Junior Gold Miners ETF (NYSE:GDXJ) this year, but a handful of individual junion mining stocks are outperforming the index.

After one of the most exhausting and traumatic bear markets in junior mining history the 2016 rebound has been quick and powerful.  We are witnessing a massive uptrend that has rarely seen pullbacks.  Its been very hard for the investors who have been short precious metals or in cash to acquire meaningful sized positions.  Gold and especially silver are breaking out and look very powerful.

Some of out top notch junior gold miners are breaking out in addition the lithium sector may be just a few weeks away from its next big up move after consolidating for about three months.  I expect more news coming out of Tesla’s Gigafactory to help increase eyeballs on the sector.  Big money is getting behind gold and lithium in 2016 which I have been positioning for years.

Lets visit some of the recent junior gold stories I have been highlighting this year. 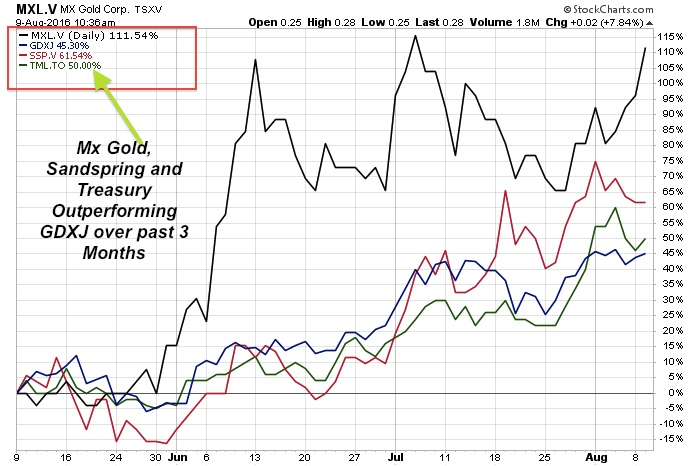 1)Treasury Metals (TML.TO) which was pretty much a low volume and relatively unknown stock when I started highlighting it at the end of last year on my website.  Now the stock is breaking out into new 52 week highs as it may begin to be recognized as one of the top near term high grade gold producers in Ontario.  Treasury has been able to raise money this year and recently made a strategic gold acquisition in Ontario.  Please note I am a shareholder of Treasury Metals and they are a current website sponsor.
http://www.treasurymetals.com/s/press_release.asp?id=122643

2)MX Gold (MXL.V or DTVMF) is a company which I have been highlighting for a few months as a near term gold producer.  The company was able to raise $4 million CAD and recently appointed a former Goldcorp (GG) mine builder as its new CEO.  This is a huge vote of confidence in the ability of the company to start gold production at its Willa Project.  MXL recently broke out on huge volume and then pulled back to the 50 Day Moving Average which it has bounced off of on good volume.  Look for a bullish MACD crossover. Please note I am a shareholder of MX Gold and they are a current website sponsor.
http://mxgoldcorp.com/news/

3)I just recorded an interview with Sandspring Resources (SSP.V or SSPXF) CEO Rich Munson and discussed what makes their project so unique that it can attract the large high quality silver royalty company Silver Wheaton (SLW) to make a financial commitment. Sandspring was also able to raise a significant amount of money this year which will allow them to do some exploration drilling to hopefully look at starter areas which could improve the economics on the Definitive Feasibility Study which Sandspring is working toward.  Having Silver Wheaton and Mining Financier Frank Giustra backing the company is great sponsorship and I would not be surprised to see Sandspring attract the attention of large majors who have seen the recent success of Guyana Goldfields (GUY.TO) which is an $8 stock and the possible undervaluation of Sandspring which is still under $1.  Please note I am a shareholder of Sandspring and they are a current website sponsor.
View the interview here: https://www.youtube.com/watch?v=FwB2o1lehdw