At first glance, silver investment activity in August would have you believe that bearish sentiment is pervading the sector. The premier silver ETF, iShares Silver Trust (NYSE Arca: SLV), which is backed by physical bullion held in the vaults of JPMorgan Chase & Co. (NYSE:JPM) in New York and London, fell $0.87, or 4.4% to $18.71. A close alternative, the ETFS Physical Silver Shares (NYSE: SIVR) dropped $0.97, or 4.8% to $19.19. 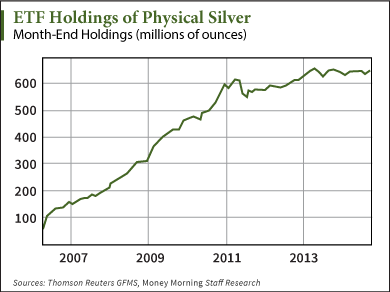 August’s silver price performance was worse than July’s, when the price of silver fell 2.8% in a month that has averaged returns of 4.2% over the last decade.

July saw the big ETFs backed by silver shed physical holdings by 1.2 million ounces, or 0.2%, according to data from Thomson Reuters GFMS. This was a reversal from the first half of the year when silver ETFs had added more than 7 million ounces in the first six months of the year and prices declined accordingly.

But silver investments charted a different course in August…