Kyle Anderson: From March 5 – April 11, the Nasdaq Composite dropped more than 8% when the market faced a sharp tech sell-off.

At the time, Money Morning‘s Defense & Tech Specialist Michael A. Robinson warned readers not to run from the market. He knew there were still tech stocks to buy even though the broader market was down.

Since then, the Nasdaq has rebounded 6%, and those that fled the market missed an excellent buy-in opportunity. 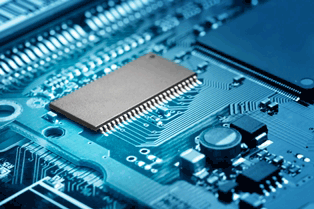 Right now, Robinson is targeting a specific sector with numerous buy-in opportunities. It was a casualty of the recent sell-off, which Robinson says was undeserved.

“Sometimes completely healthy sectors sell off just because everything else is falling off,” Robinson said. “It’s absurd. So, when you see it happening, that’s your chance to buy in.”

The sector Robinson is referring to is the semiconductor industry.

It’s Time to Make Money from the Semiconductor Sell-Off

Since then, the ETF has come roaring back. It touched an all-time high of $75.12 this week and is up nearly 22% year to date.

“Smartphones may be the main catalyst behind this semiconductor boom,” Robinson said. “While your personal experience may lead you to believe the smartphone market is mature, these devices, which use an array of chips for processing, cameras and power management, will continue to see big sales numbers for years to come.”

According to the International Data Corporation (IDC), more than 1 billion smartphones were purchased globally in 2013. By 2017, that number is expected to jump 70% to 1.68 billion.

The Semiconductor Industry Association (SIA) has recently reported that worldwide sales of semiconductors reached $78.47 billion during the first quarter of 2014 – the highest-ever total for the first three months of a year.

Additionally, Research and Markets has indicated that global semiconductor sales should increase 4.4% this year.

“When you see a stock or sector getting taken down in a ‘guilt-by-association’ sell-off, pick it up before the rest of the crowd notices, too,” Robinson said. “And right now, despite the recent sell-off, the semiconductor sector is as healthy as it’s ever been.”

As the semiconductor industry continues to gain momentum, here are two semiconductor stocks that have made our “stocks to buy” list…