Marshall Hargrave:  Consumer staples stocks could be getting a little long in the tooth.

Meaning, a whirlwind of merger and acquisition activity, along with income-starved investors chasing steady dividends, has pushed the valuations of the consumer staples sector to historical highs. 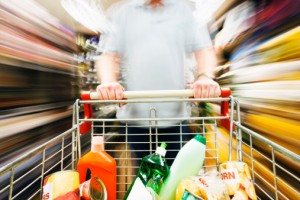 The price-earnings ratio for the consumer staples sector is right at 22. That’s well above the sector’s 10-year average P/E ratio of 17.3, and also above the 20-year average of around 20.

The sector’s P/E ratio is also at a premium to the S&P 500 P/E of 20.5. Given their defensive nature and steady dividends, you usually see consumer staples trading at a discount to the market.

Stock price growth is outrunning earnings growth, which is generally a bad recipe in a low growth industry.

Just about a month ago I predicted a Wal-Mart turnaround, following the retail giant’s announcement that it would raise its minimum wage to $9 an hour. My thesis then was that better-paid employees would create a better in-store experience.

But there’s a lot more to the Wal-Mart story. This includes its massive scale and ability to source goods cheaper than competitors, which allows it to be the low-cost retail leader in addition to being a one-stop shop. Let’s not forget its foray into the small-store format, which includes its Neighborhood Market stores that are meant to fend off the likes of Dollar General (NYSE: DG).

Wal-Mart trades at a P/E multiple of 16, and with 40 years of consecutive annual dividend increases and a solid 2.4% dividend yield, look for the company to continue attracting shareholders looking for stable stocks.

Archer Daniels is a major agriculture player. It leverages its large storage and processing network to buy, process and then sell commodities. Basically, it purchases crops and then sells them to food and energy businesses. It’s a simple business model (on paper) that has been a steady revenue generator for Archer Daniels for a number of years.

Archer Daniels trades at a P/E of 14 and has upped its dividend for 39 straight years. Its current dividend yield stands at 2.2%.