Michael Snyder: Historically, small businesses have been the primary engine of new job creation in the United States.  If the economy was getting healthy, we would expect to see the number of jobs at new businesses rise.  Instead, we are witnessing just the opposite.  We are told that the economy is supposed to be “recovering”, but the number of “startup jobs” at new businesses has fallen for five years in a row.  According to an analysis of U.S. Department of Labor data performed by economist Tim Kane, there were almost 12 startup jobs per 1000 Americans back in the year 2006.  By 2011, that figure had fallen to less than 8 startup jobs per 1000 Americans.  According to Kane, the number of jobs in the United States at businesses that are less than one year old has fallen from 4.1 million in 1994 to 2.5 million in 2010.  Overall, the number of “new entrepreneurs and business owners” has fallen by more than 50 percent as a percentage of the population since 1977.  The United States was once known as “the land of opportunity”, but now that is fundamentally changing.  At this point we truly do have a “crisis of entrepreneurship” in this country, and that is a huge reason why America is in decline.  We are witnessing the slow death of the small business in America, and that is incredibly bad news for all of us.

Unfortunately, the problems that small businesses are experiencing right now have been building up for decades.  The economic environment for small businesses in America has become incredibly toxic.  Sadly, we can see this in the numbers.  According to Kane, the following is how the decline in the number of startup jobs per 1000 Americans breaks down by presidential administration…

Obviously, we are headed very much in the wrong direction.  Kane speculates about why this may be happening in his paper…

There is anecdotal evidence that the U.S. policy environment has become inadvertently hostile to entrepreneurial employment. At the federal level, high taxes and higher uncertainty about taxes are undoubtedly inhibiting entrepreneurship, but to what degree is unknown. The dominant factor may be new regulations on labor.  The passage of the Affordable Care Act is creating a sweeping alteration of the regulatory environment that directly changes how employers engage their workforces, and it will be some time until those changes are understood by employers or scholars. Separately, there has been a federal crackdown since 2009 by the Internal Revenue Service on U.S. employers that hire U.S. workers as independent contractors rather than employees, raising the question of mandatory benefits. New firms tend to use part-time and contract staffing rather than full-time employees during the startup stage. According to Labor Department data, the typical American today only takes home 70 percent of compensation as pay, while the rest is absorbed by the spiraling cost of benefits (e.g., health insurance). The dilemma for U.S. policy is that an American entrepreneur has zero tax or regulatory burden when hiring a consultant/contractor who resides abroad. But that same employer is subject to paperwork, taxation, and possible IRS harassment if employing U.S.-based contractors. Finally, there has been a steady barrier erected to entrepreneurs at the local policy level. Brink Lindsey points out in his book Human Capitalism that the rise of occupational licensing is destroying startup opportunities for poor and middle class Americans.

Kane raises some very good points in his analysis.  Without a doubt, small businesses in the United States are being taxed into oblivion.  If you doubt this, just read this article.

And the regulatory environment for small businesses is more suffocating than it has ever been before.  Unfortunately, our politicians never seem to learn that lesson.  During his first term, Obama piled on mountains of new regulations, and now that he has won a second term he is preparing to unleash another massive wave of new regulations.

But many times the worst offenders are politicians on the state and local level.  There are some areas of the country (such as California) that have created absolutely nightmarish conditions for small businesses.  California had the worst “small business failure rate” in the country in 2010.  It was 69 percent higher than the national average.  And in 2011, the state of California ranked 50th out of all 50 states in new business creation.

Yet the politicians in California just continue to pile on even more regulations and even more taxes.

Sadly, this kind of thing is happening from coast to coast and it is killing off hordes of small businesses.  Just consider the following statistics…

-According to the U.S. Census Bureau, the U.S. economy lost more than 220,000 small businesses during the last recession.

-As a share of the population, the percentage of Americans that are self-employed fell by more than 20 percent between 1991 and 2010.

-As a share of the population, the percentage of “new entrepreneurs and business owners” dropped by a staggering 53 percent between 1977 and 2010.

So what needs to be done?

Well, first of all, the tax burden and the regulatory burden on small businesses both need to be greatly reduced.

Our founding fathers intended to establish a Republic where power would never be concentrated in the hands of just a few.  That is why they tried to strictly limit the power of the federal government in the U.S. Constitution, and that is why they greatly restricted the size and scope of corporations in early America.  For much more on this, please see this article: “Corporatism Is Not Capitalism: 7 Things About The Monolithic Predator Corporations That Dominate Our Economy That Every American Should Know“.

Our founding fathers wanted to empower individual citizens and small businesses.  They never intended for us to have a system where big government and big corporations dominate everything and crush the “little guy” at every opportunity.

Even as we witness the death of the small business in America, corporations are absolutely thriving.  The following chart shows how corporate profits after tax have exploded to new record highs in recent years… 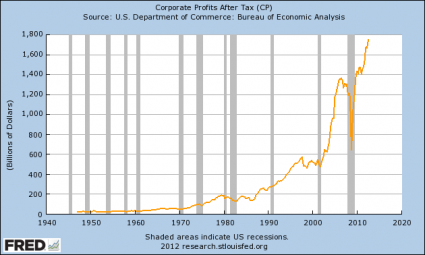 So has this been good for workers?  No, it has not translated into more jobs and higher wages.  In fact, wages and salaries as a percentage of GDP are now at an all-time low… 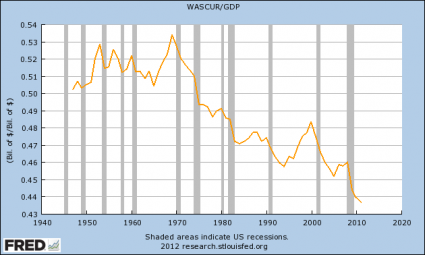 That is why it is imperative that we change “the rules of the game” so that the balance of power is shifted back in the direction of individual citizens and small businesses.  We desperately need to turn back to the principles that this nation was founded upon.

If nothing is done, these trends are going to get even worse.  Barack Obama certainly has no plans to reduce the size and the power of the government.  Since he was elected, an average of 101 new federal employees have been added to the government payroll every single day…

In the 1,420 days since he took the oath of office, the federal government has daily hired on average 101 new employees. Every day. Seven days a week. All 202 weeks. That makes 143,000 more federal workers than when Obama talked forever on that cold day in January of 2009.

And if nothing is done, the monolithic predator corporations that dominate our economy will just get even larger and even more powerful.  Meanwhile, hundreds of thousands more small businesses will close up shop all over the country.

Unfortunately, most Americans seem totally apathetic about these issues.  They seem content to wear “meggings“, watch “Honey Boo Boo” on television and let our government and corporate overlords run everything.  Most of them have even been brainwashed into believing that this is the American way of doing things.

So where do we go from here?

Well, this nation will probably continue to keep doing the same things that it has been doing, and it will continue to get the same results.

The death of small business in America is happening right in front of our eyes, and everybody can see it happening, but very few people are doing anything to stop it.