Meanwhile, Cyprus also beat Italy (NYSEARCA:EWI) to officially become the fifth Euro Zone bailout nation as ‘‘negative spillover effects through its financial sector, due to its large exposure in the Greek economy,’’ according to a government statement.

Although no specific amounts were determined yet, WSJ reported that two external consultancies estimate Spanish banks’ actual capital needs could be at around €62 billion ($77.5 billion), and Cypriot Finance Ministry staff said they expect the total financing needs to come to €10 billion ($12.5 billion).

Between the two, Spain is the one causing a lot higher anxiety.  Spain is Europe’s (NYSEARCA:VGK) fourth largest economy, which is larger than the other four euro (NYSEARCA:FXE) bailout sisters—Greece, Ireland, Portugal and Cyprus–combined.  And remember Spain already requested up to €100 billion ($125.7 billion) from EU bailout earlier this month to recapitalize its regional banks reeling from the collapse of its massive real estate bubble.  Sadly, judging from the current debt situation (see graph below), the Euro bailout train most likely will not stop here.

Previously, we discussed how in the not so distant future, almost all countries in the world could end up in one of these three classes–bankruptcy, credit counseling or debt renegotiation due to decades of deficit spending.  That also means many nations, after the storm of debt/banking crisis, will need to implement various government austerity programs, and households will commence debt deleveraging–a long and painful process.  An analysis from McKinsey should illustrate this point more clear.

Using the previous deleveraging cycle of Sweden and Finland post financial crisis during the 1990s as a baseline, McKinsey compared the current progress of US, UK and Spain.  What KcKinsey found is that the United States may have been half way through that process, while households in Spain and the United Kingdom have only just begun to deleverage. (see chart below). 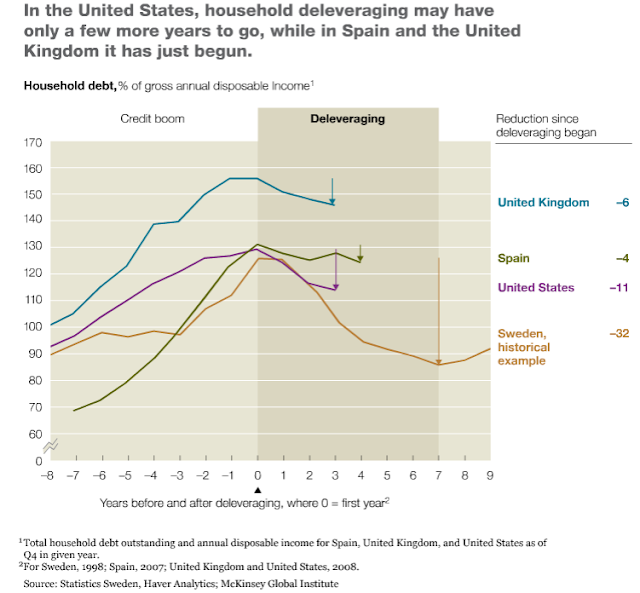 McKinsey reckons the US could return to trend as early as mid-2013, but cautions:

“… after US consumers finish deleveraging, they probably won’t be as powerful an engine of global growth as they were before the crisis. That’s because home equity loans and cash-out refinancing, which from 2003 to 2007 let US consumers extract $2.2 trillion of equity from their homes—an amount more than twice the size of the US fiscal-stimulus package—will not be available.”

More despair would come to Spain:

“….Today, Spanish corporations hold twice as much debt relative to national output as do US companies, and six times as much as German companies. Debt reduction in the corporate sector may weigh on growth in the years to come.”

UK, even though not part of the Euro sovereign bailout discussion yet, its prospect is not that much better:

“….we find that the ratio of [UK] household debt to disposable income would not return to its long-term trend until 2020.”

What’s more, “Significant public-sector deleveraging typically occurs only when GDP growth rebounds, in the later years of deleveraging.”  And since today’s deleveraging economies are larger and under more challenging circumstances, the current deleveraging process could take longer than the historical experience of five to seven years from Sweden and Finland in McKinsey’s baseline.

That suggests the world most likely could experience a long deflationary period.  Some economists are starting to worry about the U.S. and Europe (NYSEARCA:IEV) could face a coming Japanese-style deflation cycle.  Although we don’t believe that is in the cards, since Japan (NYSEARCA:EWJ) is unique in its demographics, banking and government systems, we do think darker days are ahead, and America’s lost decade would at least get an extension.