Indeed, this could be the official kickoff of the trade war we all anticipated. The protectionist trade policy, announced last week as the president met with metals executives, raised fresh inflation worries and had an immediate impact on capital markets.

As expected, the winners were domestic steelmakers. AK Steel, the only manufacturer in North America that produces carbon, stainless and electrical steels, rose as much as 9.5 percent Thursday. AK Steel CEO Roger Newport praised Trump’s decision, saying he fully supports “the actions he plans to take to stem the tide of unfairly traded steel imports that threaten the national security of our country.”

Newport wasn’t alone. Drew Wilcox, vice president of steel giant Nucor, called the tariffs “a clear message to foreign competitors that dumping steel products into our market will no longer be tolerated.”

Among the biggest losers from the news were automakers, which account for a little more than a quarter of steel demand in the U.S., according to the American Iron and Steel Institute (AISI). That makes the industry the second-largest consumer following construction. Ford, General Motors and Fiat Chrysler all fell more than 2 percent Thursday, and losses extended into Friday.

Get Ready for Higher Consumer Prices

To be clear, this is a huge deal, with serious inflationary implications. The U.S. is the world’s largest steel importer, so it’s very possible we could see retaliation from multiple trading partners on exports ranging from Florida orange juice to Kentucky bourbon to Wisconsin cheese. It’s hard to imagine a scenario where this is not passed on to consumers.

Trump was reportedly advised to exempt select allies, but it appears he’s chosen a no-exemptions option. Canada, the top supplier of steel and aluminum to the U.S., was spared in 2002 when former President George W. Bush imposed tariffs as high as 30 percent on steel.

When a country (USA) is losing many billions of dollars on trade with virtually every country it does business with, trade wars are good, and easy to win, President Trump tweeted Friday morning.

When a country (USA) is losing many billions of dollars on trade with virtually every country it does business with, trade wars are good, and easy to win. Example, when we are down $100 billion with a certain country and they get cute, don’t trade anymore-we win big. It’s easy!

The country with which the U.S. has the biggest trade deficit is China. In 2017, the deficit stood at $375 billion, which accounts for about 65 percent of the total U.S. trade deficit. The tariff on steel and aluminum should have a negligible impact, however, as the U.S. imports a relatively small percent of those metals from China.

Gold Has Done Well in Times of High Inflation

As I’ve explained numerous times before, one of the most prudent ways investors have positioned their portfolios in times of rising inflation is by adding to their gold exposure. 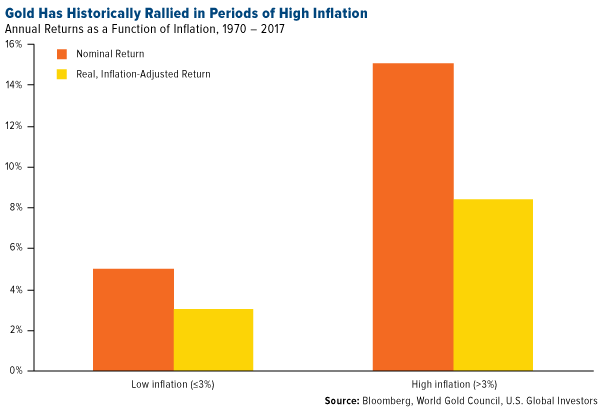 According to the WGC, “gold returns have outpaced the U.S. consumer price index (CPI) over the long run, due to its many sources of demand. Gold has not just preserved capital, it has helped it grow.”

The most recent report from the Bureau of Labor Statistics (BLS) shows that consumer prices rose 2.1 percent year-over-year in January, but as I said earlier, real inflation could be grossly understated.

To learn more about how gold could be the solution to high inflation, click here!

My Journey Through the Blockchain and Cryptocurrencies

Gold and metals were definitely top of mind last week at BMO Capital Markets Global Metals & Mining Conference, held in sunny Hollywood, Florida. I had the pleasure to be on a panel at the four-day event, which was attended by more than 1,500 curious investors and advisors, representing approximately 500 different organizations from 35 countries.

The panel I was on focused on blockchain technology and cryptocurrencies, which are reshaping how transactions are made and how companies raise funds across the globe. Startups raised more than $1.5 billion in February, the third straight month for initial coin offerings (ICOs) to generate over $1 billion. 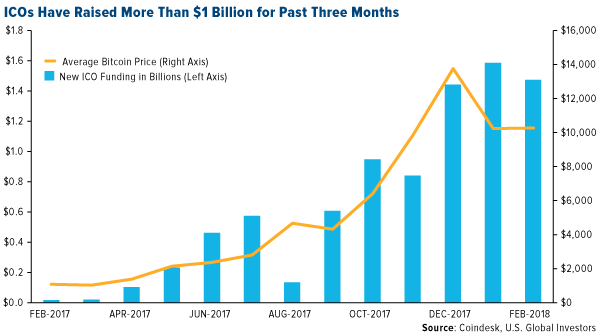 Last year, $6.5 billion was raised through ICOs, according to Token Report, and it looks as if that amount will be exceeded in just the first few months of 2018. As I wrote back in October, more and more companies are opting to raise funds through ICOs instead of going public to bypass many of the restrictive rules and costs associated with getting listed on an exchange. And unlike with private equity, smaller retail investors can participate, though I must stress that this is a very speculative trade.

The head of the Securities and Exchange Commission (SEC), Jay Clayton, strongly agrees with that last point. In December, he issued a statement explaining why he believes certain ICOs should fall under the jurisdiction of federal securities law and, as such, be filed beforehand.

Up until this point, the agency has taken few actions, but it appears it’s ready to start getting more aggressive against fraud. The Wall Street Journal reported last week that the SEC has issued “dozens” of subpoenas and information requests to cryptocurrency firms and advisors.

You might think this would hurt cryptocurrencies, but the prices of a number of them were up following the news. Bitcoin jumped nearly 6 percent on Thursday, as the token has often been seen as a “safe haven” in the cryptocurrency market.

As many of you reading this know, U.S. Global Investors made a strategic investment in HIVE Blockchain Technologies in September, and as of today, it remains the only publicly-listed company that’s engaged in the mining of virgin tokens. HIVE and its partner Genesis Mining–the world’s largest cloud bitcoin mining company–are the leading miners and owners of Ether, the “crypto-fuel” for the Ethereum network. None of these assets has been used in any transaction, just as a newly-minted U.S. dollar, hot off the press, has never been used.

I continue to be optimistic about cryptocurrencies and see a very bright future for blockchain technology. The sentiment was similarly good among many of the attendees of last week’s conference. It’s only just the beginning.

For timely, expert commentary on metals and mining, gold, cryptocurrencies and more, subscribe to our award-winning Investor Alert by clicking here!

The Consumer Price Index (CPI) is one of the most widely recognized price measures for tracking the price of a market basket of goods and services purchased by individuals. The weights of components are based on consumer spending patterns.

Frank Holmes has been appointed non-executive chairman of the Board of Directors ofHIVE Blockchain Technologies. Both Mr. Holmes and U.S. Global Investors own shares of HIVE, directly and indirectly.

The VanEck Vectors Steel ETF (SLX) was unchanged in premarket trading Wednesday. Year-to-date, SLX has gained 7.76%, versus a 2.26% rise in the benchmark S&P 500 index during the same period.

SLX currently has an ETF Daily News SMART Grade of A (Strong Buy), and is ranked #14 of 144 ETFs in the Commodity ETFs category.